A close friend of Irish novelist and poet James Joyce, Svevo was considered a pioneer of the psychological novel in Italy and is best known for his classic modernist novel La coscienza di Zeno (1923), a work that had a profound effect on the movement.

Born in Trieste (then in the Austrian Empire, after 1867 Austria-Hungary) as Aron Ettore Schmitz to a Jewish German father and an Italian mother, Svevo was one of seven children and grew up enjoying a passion for literature from a young age, reading Goethe, Schiller, Shakespeare, and the classics of French and Russian literature.

Svevo was a citizen of the Austro-Hungarian Empire until the end of the First World War. He spoke Italian as a second language (as he usually spoke the Triestine dialect). Due to his germanophone ancestry by his father, he and his brothers were sent to a boarding school near Würzburg, Germany, where he learnt fluent German.

After returning to Trieste in 1880, Svevo continued his studies for a further two years at Istituto Revoltella before being forced to take financial responsibility when his father filed for bankruptcy after his once successful glassware business failed. This 20-year period as a bank clerk at Unionbank of Vienna served as inspiration for his first novel Una vita (1892).

During his time at the bank, Svevo contributed to Italian-language socialist publication L'Indipendente (it), and began writing plays (which he rarely finished) before beginning work on Una vita in 1887. Svevo adhered to a humanistic and democratic socialism which predisposed him to pacifism and to advocate a European economic union after the war.

Following the death of his parents, Svevo married his cousin Livia Veneziani in a civil ceremony in 1896. Soon after, Livia convinced him to convert to Catholicism and take part in a religious wedding (probably after a troublesome pregnancy). Personally, however, Svevo was an atheist. He became a partner in his wealthy father-in-law's paint business that specialized in manufacturing industrial paint that was used on naval warships. He became successful in growing the business and after trips to France and Germany, set up a branch of the company in England.

Svevo lived for part of his life in Charlton, south-east London, while working for a family firm. He documented this period in his letters to his wife which highlighted the cultural differences he encountered in Edwardian England. His old home at 67 Charlton Church Lane now carries a blue plaque.

Svevo first started writing short stories in 1880. He took on the pseudonym "Italo Svevo" (literally "Italus the Swabian") for the publication of his first novel, Una vita, in 1892. The novel was not a success.

His second novel, Senilità (1898), was also received poorly. In 1919, he began work on La coscienza di Zeno (known in English as Zeno's Conscience or Confessions of Zeno).

In 1923, Italo Svevo published the psychological novel La coscienza di Zeno. The work, showing the author's interest in the theories of Sigmund Freud, is written in the form of the memoirs of Zeno Cosini, who writes them at the insistence of his psychoanalyst. Svevo's novel received almost no attention from Italian readers and critics at the time. 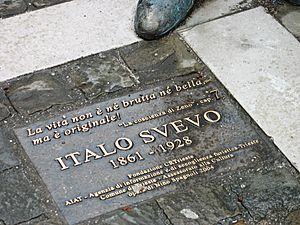 The work might have disappeared altogether if it were not for the efforts of James Joyce. Joyce had met Svevo in 1907, when Joyce tutored him in English while working for Berlitz in Trieste. Joyce read Svevo's earlier novels Una vita and Senilità.

Joyce championed Zeno's Conscience, helping to have it translated into French and then published in Paris, where critics praised it extravagantly. That led Italian critics, including Eugenio Montale, to discover it. Zeno Cosini, the book's hero and unreliable narrator, mirrored Svevo himself, being a businessman fascinated by Freudian theory. Svevo was also a model for Leopold Bloom, the protagonist of Joyce's seminal novel Ulysses.

Zeno's Conscience never looks outside the narrow confines of Trieste, much like Joyce's work, which rarely left Dublin in the last years of Ireland's time as part of the United Kingdom. Svevo employed often sardonic wit in his observations of Trieste and, in particular, of his hero, an indifferent man who cheats on his wife, lies to his psychoanalyst, and is trying to explain himself to his psychoanalyst by revisiting his memories. 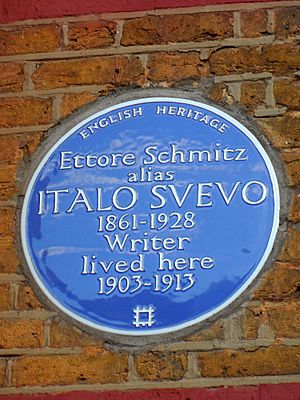 There is a final connection between Svevo and the character Cosini. Cosini sought psychoanalysis, he said, in order to discover why he was addicted to nicotine. As he reveals in his memoirs, each time he had given up smoking, with the iron resolve that this would be the "ultima sigaretta!!", he experienced the exhilarating feeling that he was now beginning life over without the burden of his old habits and mistakes. That feeling was, however, so strong that he found smoking irresistible, if only so that he could stop smoking again in order to experience that thrill once more.

After being involved in a serious car accident, he was brought into hospital at Motta di Livenza, where his health rapidly failed. As death approached he asked one of his visitors for a cigarette. It was refused. Svevo replied: "That would have been my last." He died that afternoon. 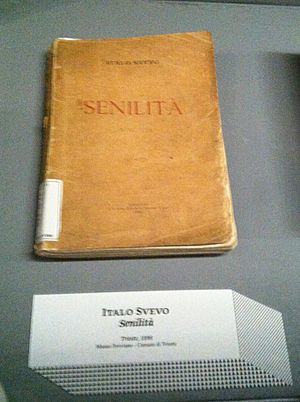 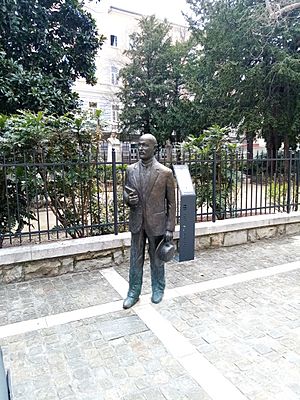 Svevo, along with Luigi Pirandello, is considered a prominent figure of early 20th century Italian literature and has had an important influence on later generations of the country's writers.

Though only recognised for his literary achievements towards the end of his life, Svevo is celebrated as one of Italy's finest writers, particularly in his home city of Trieste, and has a statue in front of the Museum of Natural History erected in his honour.

The following are named after him:

All content from Kiddle encyclopedia articles (including the article images and facts) can be freely used under Attribution-ShareAlike license, unless stated otherwise. Cite this article:
Italo Svevo Facts for Kids. Kiddle Encyclopedia.