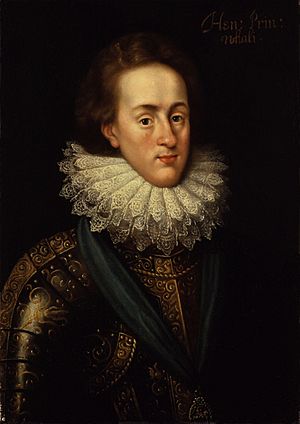 Henry Frederick, Prince of Wales (19 February 1594 – 6 November 1612) was the oldest son of King James I & VI and Anne of Denmark. His name comes from grandfathers Henry Stuart, Lord Darnley and Frederick II of Denmark.

Prince Henry was widely seen as a bright heir to his father's throne. However, he died before his father because of typhoid fever. Because of this, the English and Scottish thrones' power went to his younger brother Charles.

Several places in Virginia Colony were named in honor of Prince Henry before and after his death.

He was born at Stirling Castle and became Duke of Rothesay, Earl of Carrick, Baron of Renfrew, Lord of the Isles and Prince and Great Steward of Scotland when he was born. His father made Alexander Erskine, Earl of Mar, take care of him. He did not let his mother take care of him. This was because James worried that the mother's slight liking for Catholicism might have some effect on the son. Although this made lots of fights between Anna and James, Henry was kept under the care of Mar's family until 1603. This was when James became King of England and his family moved south.

Sir George Lauder of The Bass was his teacher until he went to England. Sir George was a Privy Counsellor – described as the King's "familiar councillor" – and he was also taught in music by Alfonso Ferrabosco the younger.

All content from Kiddle encyclopedia articles (including the article images and facts) can be freely used under Attribution-ShareAlike license, unless stated otherwise. Cite this article:
Henry Frederick, Prince of Wales Facts for Kids. Kiddle Encyclopedia.