The "Citie of Henricus"—also known as Henricopolis, Henrico Town or Henrico—was a settlement in Virginia founded by Sir Thomas Dale in 1611 as an alternative to the swampy and dangerous area around the original English settlement at Jamestown, Virginia. It was named for Henry, Prince of Wales (1594–1612), the eldest son of King James I.

The site of Henricus is located on a neck of land called Farrar's Island, which later became part of the Shire of Henrico (1634) and was renamed Henrico County in 1637.

Today, the settlement is interpreted via Henricus Historical Park, a living history museum.

Henricus was one of the earliest English settlements in the New World. It was located on the James River, a few miles southeast of the modern city of Richmond, Virginia. At the time, the First Anglo-Powhatan War was raging, and the natives offered much resistance to the English encroachment, largely orchestrated by native captain Nemattanew — or as the English garrison knew him, "Jack-of-the-Feather". Prior to the development of Richmond, Henricus was one of the westernmost outlying developments from the Colony of Virginia's fortified capital downriver at Jamestown. In 1612–1613, a facility known as "Mt. Malady" was built nearby; it was the first hospital in the English colonies of North America.

This settlement was near where Pocahontas grew up among the Appomattoc tribe of the Powhatan Confederacy. Reverend Alexander Whitaker converted her to Christianity during her captivity under Sir Thomas Dale, deputy governor of the colony. She met settler John Rolfe during this time and they married on April 5, 1614. Rolfe's longtime friend, Richard Buck, presided at their wedding. They lived together across the river at the Varina Farms Plantation. Their mixed-race son, Thomas Rolfe (named for Sir Thomas Dale, deputy governor of the colony of Virginia), was born on the plantation. His descendants were among many of the so-called First Families of Virginia (FFV).

The Virginia Company tried to found the first institution of higher education in British America. In 1618, they obtained a royal charter for a proposed University of Henrico, and in following years set aside land for it at Henricus. By 1622, the settlers had established a school for Native Americans on the site. Much of the English settlement was destroyed in the Indian Massacre of 1622.

By 1623, more settlers occupied the college land than before the massacre. The next year King James I of England dissolved the Virginia Company and its college, seizing its assets and transforming the proprietary colony into a royal one. The Crown controlled it from then on.

In 1693, the College of William and Mary was established in Williamsburg. A plaque on the Wren Building, the college's first structure, ascribes the institution's origin to "the college proposed at Henrico." 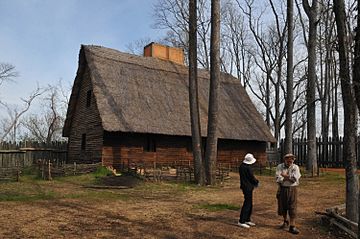 The area later saw action during the American Revolutionary War. During the American Civil War, the narrow neck of land on which Henricus was located was excavated in an attempt to bypass Confederate defensive batteries along the James River, which resulted in Dutch Gap. The channel was later widened, and the old river channel silted up, forming what is now the 810-acre (3.3 km2) Dutch Gap Conservation Area.

Eventually the exact location of the former town of Henricus was forgotten. The 12-acre (4.9 ha) archeological site in Chesterfield County was listed as Henrico on the U.S. National Register of Historic Places in 1972. Though archaeological evidence of the actual settlement has not been found (due to the creation of Dutch Gap and other disturbances nearby), a reconstruction based on historical evidence of the settlement has been created nearby as a living history museum, Henricus Historical Park.

All content from Kiddle encyclopedia articles (including the article images and facts) can be freely used under Attribution-ShareAlike license, unless stated otherwise. Cite this article:
Henricus Facts for Kids. Kiddle Encyclopedia.