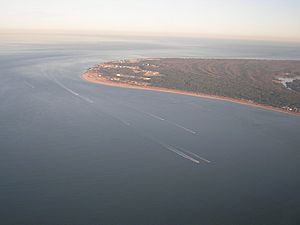 Cape Henry is a cape on the Atlantic shore of Virginia located in the northeast corner of Virginia Beach. It is the southern boundary of the entrance to Chesapeake Bay.

Across the mouth of the bay to the north is Cape Charles. Named for sons of King James I of England in 1607, together Cape Henry and Cape Charles form the Virginia Capes.

Cape Henry was named in 1607 in honor of Henry Frederick, Prince of Wales, the eldest son of King James I of England, by an expedition of the London Company branch of the proprietary Virginia Company headed by Captain Christopher Newport. After an unusually long voyage of 144 days from England, it was their first landfall, an event which has come to be called "The First Landing". Soon after this landing the English colonists erected a wooden cross and gave thanks for a successful crossing to a new land. In the First Charter of Virginia, King James I devoted parcels of land for the purpose of spreading the Christian religion. The Charter reads in part: "We greatly commending, and graciously accepting of, their Desires for the Furtherance of so noble a Work, which may, by the Providence of Almighty God, hereafter tend to the Glory of his Divine Majesty, in propagating of Christian Religion to such People, as yet live in Darkness and miserable Ignorance..."

Captain Newport, with his three ships, Susan Constant, the Godspeed, and the Discovery, and the group of 104 men and boys, subsequently explored inland and established Jamestown which became the first permanent English settlement in North America.

The Cape Henry Memorial commemorates The First Landing of the settlers that established Jamestown. Nearby, the historic Cape Henry Lighthouse was the first in the United States. Also of historical interest, the passenger station built in 1902 and served by the original Norfolk Southern Railway was restored late in the 20th century and is used as an educational facility by Fort Story, an army base located at Cape Henry. First Landing State Park occupies and protects the rest of the cape itself, as well as some of the nearby area. Shore Drive, a locally well-known road, facilitates viewing of the rest of the shoreline in Cape Henry.

All content from Kiddle encyclopedia articles (including the article images and facts) can be freely used under Attribution-ShareAlike license, unless stated otherwise. Cite this article:
Cape Henry Facts for Kids. Kiddle Encyclopedia.