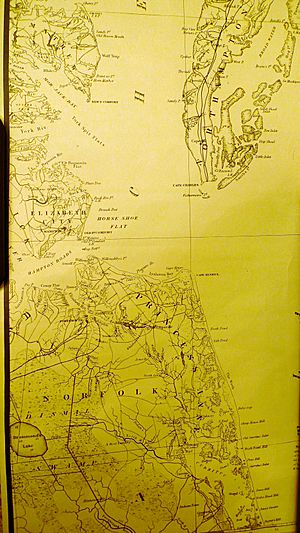 The Virginia Capes are the two capes, Cape Charles to the north and Cape Henry to the south, that define the entrance to Chesapeake Bay on the eastern coast of North America.

In 1610, a supply ship learned of the famine at Jamestown when it landed at Cape Henry.

The importance of Chesapeake Bay in American history has long made the Virginia Capes strategically significant, most notably in the naval Battle of the Chesapeake that was crucial to the American victory at the siege of Yorktown, effectively ending the American Revolutionary War. As a result, the area was heavily garrisoned, beginning with the construction of Fort Monroe and Fort Wool in 1819. During the American Civil War, a pivotal battle between the ironclad warships USS Monitor and CSS Virginia was fought in Hampton Roads. The Virginia was attempting to break the Union blockade that was strangling the Confederacy.

More recently, because of the close proximity of many military installations, including Naval Station Norfolk, Joint Base Langley-Eustis, Joint Expeditionary Base Little Creek–Fort Story, NAS Oceana, the Norfolk Naval Shipyard, and Newport News Shipbuilding, the Capes area has often been used for the initial trials of new Navy ships and for military training exercises.

All content from Kiddle encyclopedia articles (including the article images and facts) can be freely used under Attribution-ShareAlike license, unless stated otherwise. Cite this article:
Virginia Capes Facts for Kids. Kiddle Encyclopedia.