Originally named Castle Calhoun or Fort Calhoun after Secretary of War John C. Calhoun, the fort was renamed after Maj. Gen. John Ellis Wool on 18 March 1862 during the American Civil War. It is noted on current nautical maps as "Rip Raps", and was sometimes referred to by that name during the Civil War.

Fort Wool was one of more than forty forts started after the War of 1812, when British forces sailed the Chesapeake Bay to burn the Capital. This program was later known as the third system of U.S. fortifications. Designed by Brigadier General of Engineers Simon Bernard, an expatriate Frenchman who had served as a general of engineers under Napoleon, Fort Wool was constructed on a shoal of ballast stones dumped as sailing ships entered Hampton's harbor, and was originally intended to have three tiers of casemates and a barbette tier with 216 muzzle-loading cannon, although it never reached this size. Only two-thirds of the fort's bottom two tiers were completed. Fort Wool was built to maintain a crossfire with Fort Monroe, located directly across the channel, thereby protecting the entrance to the harbor.

In 1902, as a result of the Endicott Board's findings, all of the original fort, except for eight casemates at the west end, was demolished and new fortifications were constructed. The new armament, mounted in three batteries of two 6-inch (152 mm) guns each, plus two batteries totaling six 3-inch (76 mm) guns, remained in place for decades, with modifications made from time to time. Only the six original three-inch guns remained in 1942, when two were sent to nearby Fort John Custis on Fisherman Island. A modern battery of two new long-range six-inch guns was constructed over one of the old Endicott period batteries during World War II, but was never armed. The fort was decommissioned by the military in 1953.

Brigadier-general of Engineers Simon Bernard was tasked by Secretary of War John C. Calhoun to create or improve fortifications for the protection of vital U.S. ports. Bernard's plan was to build more than forty new forts, including Fort Wool, which he had named Fort Calhoun. The fort was to have three tiers of casemates and a barbette tier with a total of 216 muzzle-loading cannon mounted, and was to be manned by a garrison of 1,000 soldiers. With four tiers, it was planned as the first "tower fort" of the third system, resembling the four-tier Castle Williams in New York harbor. Early plans called it "Castle Calhoun". The fort was effectively a sea fort, as the island had to be built up considerably to accommodate it. The fort was planned as a shallow "V" shape pointing north, with rounded ends. It was to be built on a 15 acres (6.1 ha) artificial island southeast of Old Point Comfort in Hampton, Virginia. Construction got underway in 1819 when crews started dumping granite boulders into the water. It took four years to bring the rock pile up to the 6-foot-tall island called for in the plans, and three more years before the foundation was ready to begin the fort's construction.

A controversy soon arose over the stones purchased for the island. A nineteen-page report sent May 7, 1822 to the House of Representatives from the Military Affairs committee included depositions from individuals alleging that the contract to deliver 150,000 perches of stone at $3.00 per perch awarded to Elijah Mix on July 25, 1818 was fraudulent. Before awarding the contract, inquiries had been made at several quarries, and it was no secret that the government needed much stone for the project. The allegation was that the contract was awarded to Mix by Brigadier General Joseph Swift of the War Department without advertising for bids. While other contracts had been awarded without advertising for bids as was standard procedure before April 1818, in April 1818 the newly reorganized United States Army Corps of Engineers required public notice be given for every contract after that date. Two proposals were received before the contract was awarded to Mix, and two more afterwards. All four of these proposals came in with higher bids than the one Mix offered. Many knowledgeable men agreed that the government had made a good deal, and the contractor had made a bad one for himself. In 1819, the controversy increased when Mix assigned half his contract to Major Christopher Van Deventer, who was chief clerk in the War Department. Major Van Deventer and Mix were married to the daughters of Major Samuel Cooper, a noted Revolutionary War officer. Van Deventer later sold half of his interest to his father-in-law, Major Cooper. Secretary of War Calhoun had advised him that while what was done was not illegal, it "might expose Van Deventer to improper insinuations." Major Van Deventer deposed that he had no interest in the contract when it was first negotiated nor did he have any influence when the contract was awarded. General Swift deposed that he felt Major Van Deventer had no interest in the contract when it was originally negotiated. Major Cooper and Major Van Deventer sold their shares to Howes Goldsborough & Co. on July 1, 1820.

Construction of the fort began in 1826, and after considerable delays caused by subsidence of the island, two-thirds of the first level of casemates was finally completed in 1830. Construction continued through 1834, and only half of the second tier was completed. It was then found that Fort Calhoun's foundations had continued settling. Reports to the Chief of Engineers repeatedly stated that the island had stabilized and construction could continue "the next year". In fact, the island continues to settle in the early 21st century. A young second lieutenant and engineer in the U.S. Army, Robert E. Lee was transferred there to assist Captain Andrew Talcott, the U.S. Army engineer in charge of the construction of Fort Wool and its larger companion Fort Monroe, across the channel on the mainland. Lee was given the task of stabilizing the island as his first independent command. He found that the island wouldn't hold the weight of the two tiers of casemates and brought more stone in to stabilize it, but the fort never reached its intended size. Lee found the stone foundation under the fort was the problem, and that it would never support the weight of four tiers of the completed fort.

Work began again in 1858, but the outbreak of the American Civil War in 1861 brought the fort's construction to a halt, with one complete tier and one open-top tier of casemates on about two-thirds of the designed perimeter. The south-facing "gorge" or back of the fort remained open.

Fort Wool also has a little-known association with presidents. President Andrew Jackson, broken hearted after the death of his wife and in frail health, came to Fort Wool in the late 1820s and the 1830s. Jackson made the fort his "White House." Jackson built a hut and would watch ships pass the island. He even made key policy decisions from the fort with cabinet advisers. Ironically, President Jackson's Secretary of War John C. Calhoun had become the president's arch-rival by this stage, by threatening to pull South Carolina out of the Union. In the mid-1840s President John Tyler took sanctuary on the island after the death of his first wife. Abraham Lincoln also visited the fort.

Fort Wool even has an association with the actor Sir Alec Guinness, who was grounded in a minefield off the fort in World War II. The comedian Red Skelton also showed up at Fort Wool during the war to entertain troops. 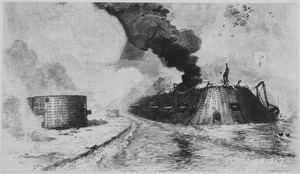 The battle of the ironclads

The fort was originally named after John C. Calhoun, President Monroe's Secretary of War who was a Southern politician of secessionist tendencies. In 1862 it was renamed after Maj. Gen. John Ellis Wool, a Mexican War hero and commander at Fort Monroe. The fort was armed during the Civil War, initially with only 10 guns, and fired on Confederate positions and vessels.

A long-range experimental cannon, the Sawyer gun, was installed at Fort Calhoun in mid-1861 during the Civil War. The weapon was rifled, and an illustration in an August 1861 newspaper shows it mounted on a high-angle carriage. The range of this weapon extended all the way to Sewell's Point, more than three miles away (where the Norfolk Naval Base is now located), the site of a Confederate earthen fort with bastions and a redan and three artillery batteries totaling 45 guns. The weapon was a rifled 24-pounder (which would fire a projectile of 42–48 pounds), one of several rifled artillery pieces developed by Sylvanus Sawyer; however, none of his designs were widely adopted. A weapon of this type was tested at Fort Monroe in 1859, and two different Sawyer weapons, a 24-pounder rifle and a 3.67-inch, were used in the Siege of Richmond of 1864–65, although the 24-pounder burst at the tenth round and the 3.67-inch rifle was seldom used. The Battle of Hampton Roads took place off Sewells Point on March 8–9, 1862. USS Monitor faced CSS Virginia during the Battle of the Ironclads in 1862. The Sawyer gun also fired at Virginia, although it did no damage to the ironclad's armor.

In 1885 the Endicott board met to recommend improvements to U.S. coast defenses. At Fort Wool the result was the demolition of all but a small part of the western end of the fort to make room for modern gun emplacements. Five new gun batteries were constructed at the fort after 1902, when funding became available. Fort Wool was armed with relatively small-caliber, rapid-fire guns because Fort Monroe had numerous large-caliber weapons. The 3-inch guns were intended to defend controlled underwater minefields against minesweepers. Some of the mines (called "torpedoes" at the time) were stored at Fort Wool; the mines were controlled from Fort Monroe.

In 1917 and 1918, all but two of the six-inch guns were removed for potential use as field guns on the Western Front, along with their disappearing carriages. The remaining guns were shifted from Battery Claiborne to Battery Gates.

Battery 229 with two 6-inch (152 mm) shielded guns on long-range carriages was constructed on a rebuilt Battery Horatio Gates from March 1943 to January 1944. The work was completed and the shielded carriages were installed; however, the gun tubes were not mounted. On 30 September 1943, installation was completed on an SCR-296A radar to provide fire control for Battery 229. The previous 6-inch guns were scrapped in 1942–43. Battery Lee's four 3-inch guns were transferred to Fort Story, two each in 1942 and 1943. Anti-submarine nets were stretched across the harbor between Fort Wool and Fort Monroe in both world wars.

In 1946 Battery Hindman's pair of 3-inch guns were transferred to Fort Monroe as a saluting battery.

The fort was decommissioned in 1953 and given to the Commonwealth of Virginia. In the 1950s, the Hampton Roads Bridge-Tunnel (HRBT) was constructed next to Fort Wool, with its southern island connected to the fort by an earthen causeway. The HRBT opened to traffic in 1957. In 1967 and again in 1970, the City of Hampton developed the fort into a park, accessed by the passenger ferry Miss Hampton II. The fort can also be seen by westbound vehicles on approach to the HRBT southern tunnel, which carries Interstate 64 across the mouth of Hampton Roads.

The island, now called Rip Raps, continues to settle, and occasionally the casemates of the original fortress are off-limits for safety reasons.

On 28 April 2007, a garrison flag was raised over Fort Wool for the first time. This took place during a parade of tall ships sailing past the fort, part of the 400th anniversary celebrations of the settlement of Jamestown.

In 2020 the fort was converted into a bird sanctuary, and routine public access was terminated.

All content from Kiddle encyclopedia articles (including the article images and facts) can be freely used under Attribution-ShareAlike license, unless stated otherwise. Cite this article:
Fort Wool Facts for Kids. Kiddle Encyclopedia.