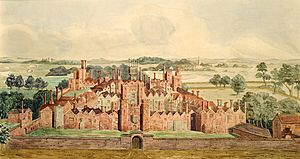 Oatlands Palace is a former Tudor and Stuart royal palace which took the place of the former manor of the village of Oatlands near Weybridge, Surrey. Little remains of the original building, so excavations of the palace took place in 1964 to rediscover its extent.

Much of the foundation stone for the palace came from Chertsey Abbey which fell into ruins after the Dissolution of the Monasteries.

Henry VIII acquired the house in 1538, and rebuilt it for Anne of Cleves. The palace was built around three main adjoining quadrangular courtyards covering fourteen hectares and utilising an existing 15th-century moated manor house. He married Catherine Howard in the palace on 28 July 1540. Henry's subsequent wife, Catherine Parr, spent time at the Palace as well. Records of her writings include a letter sent from Oatlands to her brother, William, Lord Parr, shortly after her marriage to the King in July 1543. 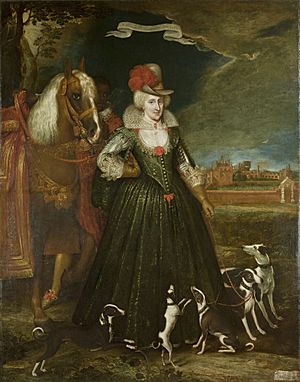 Anna of Denmark and her African servant at Oatlands, Paul van Somer

It subsequently became the residence, at various times, of Mary I, Elizabeth I, James I and Charles I. It was to Oatlands that Mary Tudor retreated after her supposed pregnancy. Her previous residence, Hampton Court Palace, had housed the nursery staff that was assembled for the birth of the child. The announcement of a movement to Oatlands (considerably smaller than Hampton) ended any hope of a happy outcome of the Queen's pregnancy.

Prince Henry and Princess Elizabeth were in residence in August 1603. Prince Charles came from Dunfermline Palace to Oatlands in September 1604. James I stayed in 1605 and enjoyed fishing in the Thames. The palace was in some disrepair, with rainwater leaking into the royal apartments. His ushers nailed up the doors to rooms above the king's lodging to prevent noise disturbing him. James I's wife Anne of Denmark built a silkworm house and a vineyard, and employed Inigo Jones to design an ornamental gateway from the Privy Garden to the Park. Her collection at Oatlands included portraits of her Danish nephews, her courtiers Jean Drummond, Mary Middlemore, Tom Durie, and her own portrait by Paul van Somer with her horse, hunting dogs, and African servant, showing the new gateway and the palace in a background.

The ambassador of Savoy Antonio Scanese, Count of Scarnafes came to see Anne of Denmark at Oatlands on 3 October 1614. She provided a grand reception for the Venetian ambassador Pietro Contarini at Oatlands on 30 August 1618. He was welcomed and entertained by her Lord Chamberlain, the Earl of Leicester, while they waited for the arrival of several noblewomen, including Margaret Howard, Countess of Nottingham and the Countess of Arundel. The Queen had planned a hunt, but it was rained off. At the end of the dinner there were sweetmeats, then they stood and toasted Elizabeth, Electress Palatine and Frederick V.

Oatlands was one of the properties settled upon Henrietta Maria on her marriage to Charles I and she used it as a country retreat, installing part of her art collection on site, and employing John Tradescant the elder for its gardens. In August 1637 it was rumoured she was sickening with consumption, and at Oatlands drinking asses milk as a remedy.

In 1646 Oatlands was a temporary home of the infant Princess Henrietta of England, daughter of Charles I of England and later Duchess of Orleans, sister-in-law of Louis XIV. Her governess Lady Dalkeith smuggled her into France in the summer of 1646. After the King's execution some Royal residences were sold by the Commonwealth Government to help pay Parliamentary debts. Oatlands Palace and its contents were purchased for about £4,000 by Robert Turbridge. He demolished it and sold the bricks to Sir Richard Weston of Sutton Place. A single house - remote from the site of the palace itself - may have originally functioned as a hunting lodge.

After the Restoration, during the 1660s, the house was the residence of William Boteler who had supported the Commonwealth and served as one of the ten major-generals during the Rule of the Major-Generals (1656), during which time he was noted as being harsh on Roman Catholics, Quakers and Cavaliers.

The house was later occupied and extended by Sir Edward Herbert, the Lord Chief Justice, but was forfeited to the Crown when he followed James II into exile. It was then awarded to his brother, Arthur Herbert, 1st Earl of Torrington, who was later the admiral in command of the English and Dutch Fleets at the Battle of Beachy Head.

The house was again enlarged by the Duke of Newcastle, Henry Clinton, who laid out formal gardens.

In 1790, Oatlands was leased from the Crown by the Prince Frederick, Duke of York and Albany the second son of George III, and the subject of the nursery rhyme The Grand Old Duke of York. His architect was Henry Holland.

The little castle, 18 miles from London, lies on a slope and commands the most glorious view. Among its many beauties is a most remarkable grotto which cost £25 000 sterling, and which was 11 years in the building. It is very large and contains many diversions, inter alia actual water that flows in from various sides, a beautiful English garden, various entrances and exits, besides a most charming bath.

He was the guest of the Prince of Wales and the Duke of York, playing music for four hours each evening. 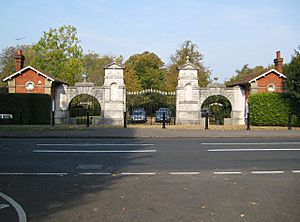 In 1794 the mansion was burnt down and was quickly rebuilt in the Gothic style of the period. After the death of the Duchess of York in 1820, the whole property was sold. It was bought by Edward Hughes Ball Hughes in 1824 (although it was not until after The Duke's death in 1827 that the sale was finally concluded) and again remodelled in 1830. Hughes had tried to dispose of the estate by public auction in 1829 but this part did not sell. He let the mansion and adjoining parkland to Francis, Lord Egerton for a seven-year period in 1832 and renewed for a similar period in 1839. The arrival of the London and South Western Railway in 1838 made the area ripe for daily commuting to London. In 1846 the estate was broken up into lots for building development and sold at three public auctions in May, August and September of that year. Following a period of private ownership by James Watts Peppercorne, the house became a hotel in 1856, known as the South Western (later Oatlands Park) Hotel.

From 1916 to 1918, during World War I, the hotel was used as a hospital for New Zealand troops injured in France. Subsequently, one of the main streets in Walton-on-Thames was renamed New Zealand Avenue in honour of those men.

The four-star Oatlands Park Hotel now occupies the site where the Oatlands mansion (Oatlands House) once stood, and there are still some signs of the earlier stages in its existence visible within the core of the building. It is not on the site of Oatlands Palace, down the hill towards the centre of Weybridge, once the same estate in land.

All content from Kiddle encyclopedia articles (including the article images and facts) can be freely used under Attribution-ShareAlike license, unless stated otherwise. Cite this article:
Oatlands Palace Facts for Kids. Kiddle Encyclopedia.