Anne of Cleves facts for kids 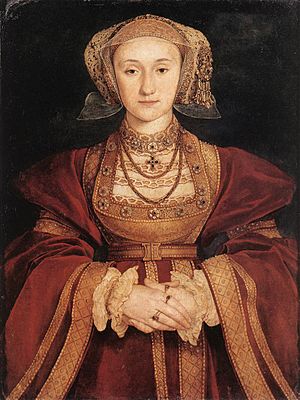 A portrait by Hans Holbein the Younger

She was the daughter of John III, Duke of Cleves and Maria of Julich Berg. She was born in Düsseldorf on 22 September 1515. She was betrothed to Francis, the Duke of Lorraine, but she ended up marrying Henry VIII in January of 1540. When the couple met for the first time, they were disappointed in each other. Henry started complaining about Anne's appearance and said that he could not love her because she had "bad breath" and smelled. Anne's previous engagement to the Duke of Lorraine was used as an excuse for a divorce, and Anne agreed to it. In July 1540 Henry divorced Anne and married Catherine Howard, who was younger and prettier.

After the divorce, Henry made Anne his "sister" and gave her money and land for the rest of her life. She was the last of Henry's six wives to die, as she outlived his sixth wife, Catherine Parr, by nearly nine years. Anne died in 1557 and was buried in Westminster Abbey.

All content from Kiddle encyclopedia articles (including the article images and facts) can be freely used under Attribution-ShareAlike license, unless stated otherwise. Cite this article:
Anne of Cleves Facts for Kids. Kiddle Encyclopedia.