Walton-on-Thames, locally known as Walton, is a market town on the south bank of the Thames in the Elmbridge borough of Surrey, England. Walton forms part of the Greater London built-up area, within the KT postcode and is served by a wide range of transport links. According to the 2011 Census, the town has a total population of 22,834. The town itself consists mostly of affluent suburban streets, with a historic town centre of Celtic origin. It is one of the largest towns in the Elmbridge borough, alongside Weybridge. 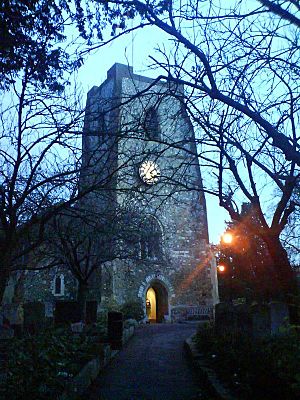 The Church of St. Mary is among the Grade I listed buildings in Surrey. 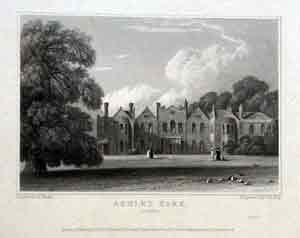 The name "Walton" is Anglo-Saxon in origin and is cognate with the common phonetic combination meaning "Briton settlement" (literally, "Welsh Town" – weal(as) tun). Before the Romans and the Saxons were present, a Celtic settlement was here. The most common Old English word for the Celtic inhabitants was the "Wealas" originally meaning "foreigners" or "strangers". William Camden identified Cowey Stakes or Sale, Walton as the place where Julius Caesar forded the River Thames on his second invasion of Britain, which stakes the Venerable Bede spoke of remaining in his time. A fisherman removed several stakes about thigh-width and 6 feet (1.8 m) made of wood that was very black and hard enough to turn an axe, shod with iron, which he sold to John Montagu, 5th Earl of Sandwich, who used to come to the neighbouring Shepperton bank to fish, for half a guinea a piece. Elmbridge Museum requires definitive evidence of these stakes, the evidence at present limited to pre 20th-century secondary sources that conflict as to detail.

Walton lay within the Anglo-Saxon quasi-administrative district, Elmbridge hundred in the shire (later county) of Surrey.

Walton appears in the Domesday Book of 1086 as "Waletona". The settlement was held jointly as overlords in the feudal system by Edward de Sarisber (Salisbury) and Richard de Tonbrige. Its Domesday assets were: 6 hides; 1 church (St. Mary's), 2 mills worth £1 5s 0d, 1 fishery worth 5s, 14 ploughs, 40 acres (16 ha) of meadow, supporting 50 hogs. It rendered £28.

The nucleus of the village is in the north, while later development took place in the southern manors on all sides of the railway station – approximately half of the land was south of the South Western Main Line which was from west to east Walton Heath, Burwood manor and Hersham manor, which all became administratively the independent parish and thus official village of Hersham in the 19th century. On a smaller scale, the majority of Oatlands village which is to the south-west was in the parish until its independence. St. Mary's Parish Church has some Saxon material and an architectural structure of the 12th century, with later additions. The square flint tower, supported by a 19th-century brick buttress has a working ring of eight bells, the oldest bearing the date 1606. In the north aisle is a large monument (1755) by the French rococo sculptor and bust maker Roubiliac to Richard Boyle, 2nd Viscount Shannon, commander-in-chief in Ireland seated at the former manor and house of Ashley Park in the parish which was demolished and its many acres sub-divided in 1920. Also in the north aisle a brass to John Selwyn (1587) keeper of Oatlands Park, with figures of himself, his wife and eleven children. An unusual relic kept in the church is a copy of a scold's bridle presented to the parish in the seventeenth century, which is mentioned in Jerome K Jerome's classic 'Three Men in a Boat'. The royal palace of Oatlands, built by Henry VIII in 1538, was a mile upstream to the west.

John Bradshaw lived in the Tudor manor house in the 17th century. He presided at Charles I's trial. An Inclosure Act 1800 enabled to be enclosed (privatised from common land or manorial land subjected to agrarian rights of others) 3,117 acres (12.6 km2) of the Walton manors which included holdings at Chertsey and 475 acres (1.9 km2) of arable common fields.

A now demolished Public Hall, in High Street, was built by Mrs. Sassoon in 1879 who was seated at Ashley Park House at the time.

During World War I, troops from New Zealand were hospitalised in the now-demolished Mount Felix House. They are remembered by a memorial in the cemetery, where those who died at Mount Felix are buried, and one in St Mary's Church where an annual service of remembrance is held. They are also remembered in the street-name New Zealand Avenue, the Wellington Pub (formerly The Kiwi), and a small memorial in the Homebase car park.

In World War II, owing largely to the proximity of important aircraft factories at nearby Brooklands, the town was bombed on various occasions by the Luftwaffe. On 27 September 1940, fighter pilot F/Sgt. Charles Sydney, who was based with 92 Squadron at RAF Biggin Hill, died when his Spitfire (R6767) crashed in Station Avenue. He was buried in Orpington and is commemorated today by a memorial plaque close to the crash site.

Hersham and Walton Motors (HWM) constructed its own racing car in the early 1950s. Stirling Moss competed in his first Formula One Grand Prix in an HWM. HWM was the world's first Aston Martin dealership that diversified into Alfa Romeo in 2009.

Walton-on-Thames is served by Walton-on-Thames railway station, which provides 4 trains per hour to London Waterloo, consisting of 2 semi-fast services and 2 stopping services, with the semi-fast services taking only 25 minutes to reach the terminus. This has proven pivotal to the demographics and to the nature and degree of the town's development – in 1851 its population was 4,106 which more than quadrupled in the 60 years to 1911, when its population reached 19,142.

Walton has regular bus services supported by Surrey County Council to nearby towns Weybridge, Shepperton, Hersham, Molesey and Kingston-upon-Thames. A pleasure boat service runs regularly on a stretch of the river that includes a loop around Desborough Island.

Local taxis: there is taxi rank at the Walton-on-Thames Station for approximately 12 taxi cars, which is served between 6:30am and 1:00am. 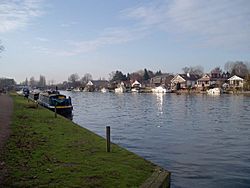 Barges moored by the towpath – Walton Marina in the background

Six versions of Walton Bridge have crossed the Thames, each westward, to Shepperton. Before the first bridge there was a ferry which went back at least to the early 17th century. 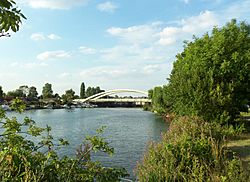 The first bridge, constructed between 1748 and 1750, was a timber structure that stood until 1783. Canaletto painted a picture of this bridge in 1754. The painting, which shows the rococo-style of this bridge, may be seen in the Dulwich Picture Gallery.

The second bridge was constructed in 1788 and stood until 1859. Constructed of brick and stone, it lasted much longer than its predecessor. This bridge was painted by J. M. W. Turner in 1805 following his sketching tour of the River Thames and River Wey.

After the second bridge collapsed a ferry crossing resumed until the construction of the third bridge in 1864. This was a girder bridge on stone piers. At the same time, a brick viaduct was constructed to span the flood plain to the south of the river. The viaduct is still standing.

The third bridge was damaged during World War II in 1940, leading to a permanent weight restriction. To alleviate this a fourth temporary bridge was constructed in 1953 on the downstream side of the old bridge; this was relegated to use by cyclists and pedestrians only until finally demolished in 1985.

Building a sixth bridge began in 2011 and was completed in summer 2013, being opened to traffic on 22 July. The two previous bridges were removed. The supplemental brick viaduct to the east remains for cycle and pedestrian use. The £32.4 million bridge is single span (has no piers in the river, which increases views from upstream and downstream and particularly navigation for boats – the first such bridge heading up the River Thames. This is also the only parabolic tied-arch bridge without piers across this river.

Some of the sketches for Monty Python were filmed in Walton. The old town hall can be seen in one sketch. Another sketch shows an Admiral Nelson dummy being thrown from one of the flats in Wellington Close and the public toilets near the pub "The Regent" are in the background of another sketch.

Location scenes for the cinema film Psychomania (1973) were shot in Walton, including the town's centre.

ITV sitcom Is It Legal? was shot in Walton. The Adventures of Robin Hood was filmed at Nettlefold Studios in Walton. 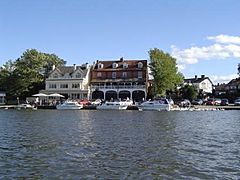 The Elmbridge Xcel Leisure Centre is to the east of the town, near the Thames. The centre includes two swimming pools, an extensive gym, indoor courts and a climbing wall.

Walton Athletics Club was founded in 1942 and is based at the new Waterside Drive Athletic Arena. The club has around 200 members ranging in age from 9 years to over 60 years old. The club provides qualified coaching in all athletics disciplines and participates in a number of different leagues to provide appropriate competition for all age groups in track and field, cross country and road running.

Walton-on-Thames Cricket Club are based in Ashley Park with the first team captained by Daniel Roberts. They will play in the Surrey Championship Division two in 2020, having previously won Division Two in 2015 & 2018. Over the years, Walton have had a host of players who have gone on to further honours including Mark Bainbridge (Surrey CCC & England Under-19s), Stephen Murdoch (Wellington), Anthony Alleyne (West Indies Under-19s) and Greg Lamb (Hampshire CCC & Zimbabwe). The club has four Saturday league senior sides and enjoyed a successful 2015 with three of the four sides gaining promotion. The club's training is run by Brian Berthoud.

Walton Casuals are a football club who are currently in the Isthmian League Division One South, a level above their neighbours Walton & Hersham. Nicknamed the Stags, they play at Church Road in a ground share with Whyteleafe while developments take place at the Waterside Drive Sports Hub. They previously played at the Waterside Stadium, just off Waterside Drive and adjacent to the modern Elmbridge Xcel Leisure Centre. They are expected to move into their new home ahead of the 2017–18 season. The club play in a tangerine orange and black home kit and a blue and white away kit.

Walton & Hersham are a football club who are currently in the Combined Counties League Premier Division. Nicknamed the Swans, they play at the Elmbridge Xcel Sports Hub. The club play in a red and white home kit and a yellow away kit. In 1973, they won the FA Amateur Cup in its penultimate year, beating Slough Town 1–0 in front of 41,000 spectators (the third largest crowd of the day) at Wembley. Later that year, they achieved a shock 4–0 win over Brian Clough's Brighton & Hove Albion (then a Football League Third Division side) in the FA Cup.

The following were born in Walton:

In 1909, composer Jerome Kern took a boat trip on the Thames with some friends and when the boat stopped at Walton, Kern went to the old inn, the Swan, to have a drink. The proprietor's daughter, Eva Leale, was working behind the bar and on 25 October 1910, the two were married at the traditional parish church.

The following have been residents of Walton:

All content from Kiddle encyclopedia articles (including the article images and facts) can be freely used under Attribution-ShareAlike license, unless stated otherwise. Cite this article:
Walton-on-Thames Facts for Kids. Kiddle Encyclopedia.