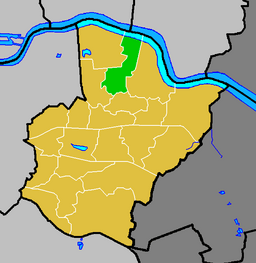 Belvedere ward (green) within the London Borough of Bexley (yellow)

Belvedere is a town in south east London, England, within the London Borough of Bexley. It lies close to the River Thames, with Erith to the east, Bexleyheath to the south, and Abbey Wood and Thamesmead to the west. Prior to the creation of Greater London in 1965, Belvedere was in the administrative county of Kent.

The area which is today known as Belvedere was for centuries part of Lesness Heath, the eastern parts of a narrow high ridge which stretches from the area of Lesnes Abbey to Erith. The northern stretch is industrial and environmental and was common meadow. In 1847 this largely uncultivated, wooded estate, almost undivided was given by operation of the will of last Lord Saye and Sele to his cousin Sir Culling Eardley, who built properties in Belvedere until his death in 1863. Eardley constructed a large wooden tower (see Belvedere (structure)) on the heath to gain views over his estate to the river Thames, giving the area its name from the Italian "beautiful view". The name can also be applied today, as the ridge of the area, and parts of its southern uplands, have commanding views towards Canary Wharf and Central London.

Eardley was persuaded to allow the construction on his property, of a Dissenters' chapel, which was built so that the original wooden belvedere became its tower. In order that the public were able to attend this chapel, he constructed paths to it across Lesness Heath. Eardley had finished in 1861, after nearly 8 years of building, his chapel, now All Saints' Church, after the earlier chapel with belvedere burned down on the same site. At the same time Eardley constructed Villa Houses and reinforced the heath path to become Erith Road. The village of Belvedere soon grew up along the path which became Nuxley Road as Eardley gradually sold off the land.

Belvedere was in Kent (and postally remains so) and formed part of the Municipal Borough of Erith before 1965 and development took place before the Second World War, with significant reconstruction after the Blitz. Despite this, Upper Belvedere and The Village still retains much of its Victorian and Edwardian charm and character. Between 1898 and 1961 Callender's Cable Works, at the Erith Works, Belvedere, was patron to Callender's Cableworks Band, an amateur brass band made up of employees of the company. The band was a prolific broadcaster on BBC Radio in the 1920s and 1930s.

Within the ward are:

Upper Belvedere features a fine church and some fine Victorian & Edwardian brick villas. It has a number of fine pubs, restaurants and retail outlets: The Eardley Arms on Woolwich Road, The Vic on Victoria Street, The Royal Standard in the heart of the village and The Fox in Belvedere village. Upper Belvedere is also home to a large park and a library that was in danger of being shut down due to the government's cuts. Fortunately closure threats have been averted thanks to the efforts of the local community. A new 'Splash Park' (opened in 2005) was a welcomed addition to the village, having been developed on the site of the old Victorian paddling pool. The splash park retains some of the original paddling pool structures. The water feature is now under threat of removal by the Council, (it is out of action for the 2015/16 season, and the maintenance budget has been drastically cut). The local community is campaigning for the water feature to be reopened.

The Grade II Listed Bexley College was designed in 1906 by W Egerton in the Queen Anne style and is on residential Erith Road on the last part of the ridge, in the east of the district on the border of Erith.

Belvedere railway station, opened in 1859, is in Lower Belvedere and is served by the North Kent Line which runs from London Cannon Street to Dartford/Gravesend/Gillingham (Kent). Belvedere also benefits from the DLR connection at nearby Woolwich, and will benefit further with the arrival of the long-awaited 'Crossrail' extension in neighbouring Abbey Wood in 2022.

Belvedere is served by several Transport for London Bus services connecting it with areas including Thamesmead, Erith, Bexleyheath, Woolwich and Sidcup.

The Green Chain Walk is largely east–west route along the northern slopes of the ridge, stretching from Plumstead Common to Erith, it provides a shortcut to the Thames Path - to which it is linked in three locations.

Driving test statistics from the DVSA for the year 2013-14 showed that Belvedere test centre had the lowest pass rate in Great Britain.

The proposed Belvedere Crossing across the River Thames would be either a bridge or tunnel between Belvedere and Rainham.

Bexleyheath and Belvedere Hockey Club are based in Welling, but play some home matches at Erith School.

All content from Kiddle encyclopedia articles (including the article images and facts) can be freely used under Attribution-ShareAlike license, unless stated otherwise. Cite this article:
Belvedere, London Facts for Kids. Kiddle Encyclopedia.