Thamesmead is an area of Greater London, England, located in the London Boroughs of Greenwich and Bexley. It is situated 9.4 miles (15.1 km) east of Charing Cross, and includes a group of disparate developments, mainly social housing, built from the mid-1960s onwards, mostly on former marshland on the south bank of the River Thames, between the established towns of Woolwich and Belvedere. Originally planned to have 60,000-100,000 residents, it is now estimated to be on target for a final population of around 50,000. 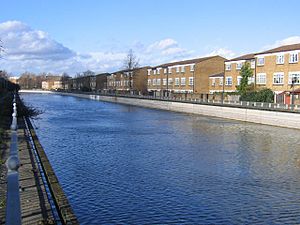 Most of the land area of Thamesmead previously formed about 1,000 acres (4.0 km2) of the old Royal Arsenal site that extended over Plumstead Marshes and Erith Marshes. There is some evidence of prehistoric human occupation of the area: flints, animal bones and charcoal were found in bore holes around Western and Central Way in 1997 by the Museum of London Archaeological Service (MOLAS). In Roman times, the river level was significantly lower, and work by MOLAS in 1997 around Summerton Way revealed evidence of field ditches and pottery and quernstones from Germany dating from around the 3rd or 4th century. After the Roman era, river levels rose again and the area reverted to marshland. According to Hasted, some areas of this marshland were drained by 1279 by the monks of Lesnes Abbey.

Between 1812 and 1816, a canal was built by convicts to take materials such as timber from the River Thames to Woolwich Royal Arsenal. Much of this canal has been filled in, but part remains in Thamesmead West and is now called the Broadwater. A disused lock gate and swing bridge over the canal still exist beside the River Thames.

Thamesmead as it is now was built at the end of the 1960s. Efforts were made to solve the social problems that had already started to affect earlier estates. These were believed to be the result of people being uprooted from close-knit working-class communities and sent to estates many miles away, where they knew nobody. The design of the estates meant that people would see their neighbours more rarely than they would have done in the terraced housing that had been typical in working-class areas. The solution proposed was that once the initial residents had moved in, their families would be given priority for new housing when it became available.

Another radical idea of the GLC division architect Robert Rigg was taken from housing complexes in Sweden, where it was believed that lakes and canals reduced vandalism and other crime, mainly among the young. He used water as a calming influence on the residents. 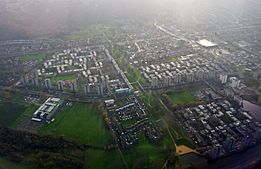 Thamesmead was designed around futuristic ideas, and indeed, looked impressive at first from a distance. It was provided walkways between its blocks of housing and later between sections in North Thamesmead. The walkways quickly became littered and abused. They were not considered safe places to walk. Pathways set out for people to walk on were put in without regard to how people would wish to get about, so some were ignored in favour of more direct routes over grassed areas.

Much of Thamesmead was initially built by the Greater London Council (GLC) for rent to families moving from overcrowded back-to-back Victorian housing (also referred to as slums) in south eastern parts of Inner London. The area had been inundated in the North Sea Flood of 1953, so the original design placed living accommodation at first floor level or above, used overhead walkways and left the ground level of buildings as garage space.

The first residence was occupied in 1968, but already there were rain penetration problems. The pre-1974 parts of Thamesmead are a mix of modernist town houses, medium-rise and 12-storey blocks system-built in concrete, which have featured in various films due to their 'rough urban look'; the design of the newer buildings is more traditional and in brick.

When the GLC was abolished in 1986, its housing assets and the remaining undeveloped land were vested in a non-profit organisation, Thamesmead Town Limited (TTL). TTL was a private company with an unusual form of governance. Its nine executive directors were local residents; they periodically submitted themselves to re-election.

Problems of the original design

Despite early proposals for the Jubilee Line Extension to go to Thamesmead, via the Isle of Dogs and the Royal Docks, Thamesmead was not included and after reaching the Greenwich Peninsula, the line heads north to Stratford, London (via Canning Town and West Ham), despite Stratford also being on the major Central line tube link into London. The main reason cited for this decision was that many workers in Canary Wharf lived in Essex and could change from National Rail to the Jubilee line at Stratford, London and West Ham.

Thamesmead is also cut off from the north of the River Thames and is in the centre of the 15 mile gap between the Blackwall Tunnel and the Dartford Tunnel/QE2 Bridge. Various proposals have been made for a new river crossing, the closest of which was in the late 1980s, when there was a controversial proposal to alter the shape of London's South Circular inner orbital road to run through Oxleas Woods. Houses in Plumstead were compulsorily purchased but the plans fell through. Since then, Thamesmead has grown significantly, limiting the number of potential sites for a new river crossing.

The most significant design failure was the almost complete lack of shopping facilities and banks: only a few "corner shops" were initially built at Tavy Bridge. From the start Thamesmead was cut off from Abbey Wood, the nearest town with shopping facilities, by a railway line; however a four lane road bridge was built over the railway in the early 1970s. The area was then cut in two by the A2016, a new four lane dual carriageway by-pass of the Woolwich to Erith section of the A206 (although this road only got as far as the industrial part of lower Belvedere: the extension to Erith was opened in 1999). Still, residential building continued, this time on the other side of the A2016, which cut this part of Thamesmead off from rail travel to central London.

In 2000, TTL was wound down and two new organisations were formed. In broad terms, Gallions Housing Association took over the ownership and management of the housing assets whilst Tilfen, later Tilfen Land, took over the remaining undeveloped land. Tilfen is jointly owned by Gallions and Trust Thamesmead.

District heating and cable radio broadcasting were pioneered in Thamesmead. The District heating system was decommissioned around the year 2000; properties connected to it had wet radiator systems installed by the landlord.

The Tavy Bridge area is now being redeveloped by Gallions in partnership with Wates Group; the plans include homes with dwelling space at ground floor level, making them susceptible to any future flooding. 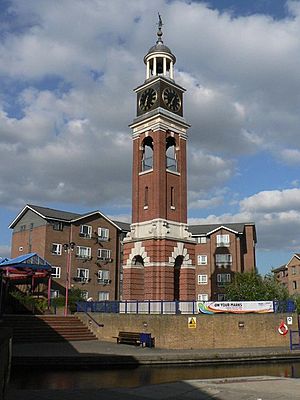 The clocktower, originally in Deptford Dockyard, now in the pedestrianised central shopping area of Thamesmead

Thamesmead now features a retail park finished in brick anchored around a Morrisons Supermarket; there is also a shopping parade which has mainly service-based outlets such as hairdressers and estate agents. It features a clock tower and lake. Some of the original overhead pedestrian walkways have been demolished for reasons of public safety and some ground floor garages have been unfilled, as incidents of crime deterred their use as parking space.

Trust Thamesmead is a registered charity set up to provide community services across Thamesmead. It runs six community centres and runs a variety of projects promoting social development and work and training projects.

Early 21st century new build properties in Thamesmead West have been blighted by social problems and mass repossessions, attracting national attention. Housing is still under construction both by Gallions Housing Association (for rent and part rent/part buy) and by private developers (for outright sale). Another new development is under construction in 2010. The final phase of the Gallions Reach Urban Village (ecopark) is the creation of Gallions Reach Park (a 14.3 acre, public open space land, between Gallions Hill and the River Thames). Water remains an important feature of the several parks and open spaces.

In 2014, Gallions, Tilfen Land and Trust Thamesmead were taken over by Peabody Trust a London housing association. In 2015, two Housing Zones in Thamesmead were announced by the Mayor of London for delivery of 2,800 homes. The zones are Abbey Wood and South Thamesmead, between Abbey Wood station and Southmere Lake, and Abbey Wood, Plumstead and Thamesmead. 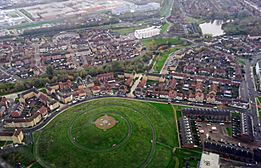 Belmarsh Prison, Isis Prison and Thameside Prison are located on the western edge of the area, while the sewage processing works at Crossness, built in the Victorian era is on eastern edge of Thamesmead. The southern boundary is the covered Southern Outfall Sewer, which has been landscaped as an elevated footpath called the Ridgeway.

In common with the rest of London, the ethnic make-up of Thamesmead has changed since it was first built. Initially, it was one of the most homogenous estates of its type in London, being predominately white and working class. The lack of London Underground services and at the very edge of the metropolis may have meant Thamesmead was not first port of call for immigrants arriving in London. The housing selection policy that favoured relatives of existing residents reinforced this aspect.

However, after the Fall of Saigon and the American withdrawal from Vietnam in the late 1970s, a small group of Vietnamese refugees built a community in the area. In the 1990s, another ultimately larger wave of emigration from West Africa (predominately Nigeria and Ghana) began, growing to a point where national newspapers talked of advertisements on Nigerian Television describing Thamesmead as a key UK destination. The 2011 census revealed that 35.58% of residents in the Thamesmead Moorings ward described themselves as Black African, the highest percentage in both London and the UK, Thamesmead East had the second highest at 34.88%.

Thamesmead's location between the Thames and the South London escarpment limits rail transport and road access points. Thus Thamesmead has no underground or surface rail links. Most residents rely on bus services to reach the nearest rail stations. There is a disused railway trackbed from Plumstead which once served the Royal Arsenal. The London Assembly proposed on 4 October 2016 to build an extension of the DLR from Gallions Reach to Thamesmead.

There are a wide variety of active community groups and local bands (The Bargains and a member of post-rock act From The Sky) and a short-range commercial radio station - 106.8 Time FM - that grew from the original cable (subsequently FM) service "Radio Thamesmead".

Places of worship in the area include the Thamesmead Ecumenical Parish, with shared buildings and co-operation by the Methodist Church, Church of England, United Reformed Church and Roman Catholic Church. The Redeemed Christian Church of God, Goodnews Haven on Nathan way

The local football team is Thamesmead Town F.C. who play at the soon to be redeveloped Bayliss Avenue ground. Thamesmead were champions of the Kent League in 2007/08, and were then promoted to the Isthmian League Division One North. Thamesmead Town have a small but dedicated following that are known as The Thamesmead Hardcore.

The Thamesmead Riverside Walk runs alongside the Thames through Thamesmead West, Thamesmead Central and Thamesmead North and is part of both the Thames Path Southeast Extension and National Cycle Route 1. Thamesmead is also one of the starting points of the Green Chain Walk, which links to places such as Chislehurst and Crystal Palace.

All content from Kiddle encyclopedia articles (including the article images and facts) can be freely used under Attribution-ShareAlike license, unless stated otherwise. Cite this article:
Thamesmead Facts for Kids. Kiddle Encyclopedia.