Crystal Palace is a residential area in south London, England, within the London Boroughs of Bromley, Croydon, Lambeth, Lewisham, and Southwark. It is named after the former local landmark, the Crystal Palace, which stood in the area from 1854 to 1936. The area is located approximately eight miles (13 km) south east of Charing Cross and includes one of the highest points in London, at 367 feet (112 m), offering views over the capital. The area has no defined boundaries and straddles the convergence of five London boroughs and three postal districts, although an electoral ward named Crystal Palace and Crystal Palace Park are entirely contained within the London Borough of Bromley. It is contiguous with Anerley, Dulwich Wood, Gipsy Hill, Penge, South Norwood, Sydenham and Upper Norwood.

The district was a natural oak forest until development began in the 19th century, and before the arrival of the Crystal Palace the area was known as Sydenham Hill. The Norwood Ridge and an historic oak tree were used to mark parish boundaries. Today, the area is represented by three different parliamentary constituencies, four London Assembly constituencies and fourteen local authority councillors. After the Crystal Palace had burned down in 1936, the site of the building and its grounds became Crystal Palace Park, which is the location of the National Sports Centre, containing an athletics track, stadium and other sports facilities. Crystal Palace Park has also been the setting for a number of concerts and films, including scenes from The Italian Job and The Pleasure Garden. Two television transmitter masts make the district a landmark location, visible from many parts of Greater London. Local landmarks include the Crystal Palace Triangle, a shopping district made up of three streets forming a triangle; Westow Park, a smaller park that lies off the triangle to the south west of Crystal Palace Park; and the Stambourne Woodland Walk.

A pneumatic railway was briefly trialled in the area in 1864. Once the railways had arrived, Crystal Palace was eventually served by two railway stations, the high level and low level stations, built to handle the volume of passengers visiting the Crystal Palace. After the palace was destroyed by fire, and with railway travel declining in the UK more generally, passenger numbers fell and the high level station was closed in 1954 and demolished 7 years later. Rail services gradually declined, and for a period in the 1960s and 1970s there were plans to construct an urban motorway through the area as part of the London Ringways plan. More recently, rail travel has seen a resurgence in Crystal Palace, with rising passenger numbers, additional London Overground services stopping at the station, a major station redevelopment in 2012 and proposals to extend the Croydon Tramlink service to the railway and bus stations. In 2016, Crystal Palace was named as one of the best places to live in London.

The ridge and the historic oak tree known as The Vicars Oak (located at the present-day crossroads of the A212 Church Road and A214 Westow Hill) were used to mark parish boundaries. This has led to the Crystal Palace area straddling the boundaries of five London Boroughs; Bromley, Croydon, Lambeth, Southwark and Lewisham. The area also straddles three postcode districts: SE19, SE20, and SE26. The ancient boundary between Surrey and Kent passes through the area and from 1889 to 1965 the area lay on the south eastern boundary of the County of London. It included parts of Kent and Surrey until 1889 and then parts of Kent, London and Surrey between 1889 and 1965.

For centuries the area was occupied by the Great North Wood, an extensive area of natural oak forest that formed a wilderness close to the southern edge of the then expanding city of London. The forest was a popular area for Londoners' recreation right up to the 19th century, when it began to be built over. It was also a home of Gypsies, with some local street names and pubs recording the link. The area still retains vestiges of woodland. The third quarter of the 19th Century brought the Crystal Palace and the railways. 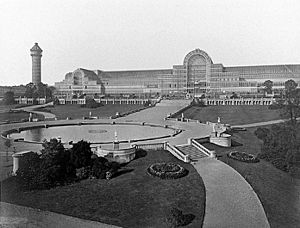 Sydenham Hill is one of the highest locations in London; 109 metres (357 ft) above sea level (spot height on Ordnance Survey Map); and the size of the palace and prominence of the site made it easy to identify from much of London. This led to the residential area around the building becoming known as Crystal Palace instead of Sydenham Hill. The palace was destroyed by fire on 30 November 1936 and the site of the building and its grounds is now known as Crystal Palace Park. 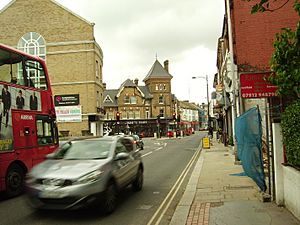 View into the Crystal Palace Triangle from Church Road

The "Crystal Palace Triangle", formed by Westow Street, Westow Hill and Church Road, has a number of restaurants and several independent shops, as well as an indoor secondhand market and a farmer's market on Haynes Lane. The triangle also contains a range of vintage furniture and clothing stores, as well as galleries, arts and crafts shops and other businesses. There is an ongoing campaign to turn a building recently converted into a church at 25 Church Road back into a cinema, after the former bingo hall was purchased by the Kingsway International Christian Centre. 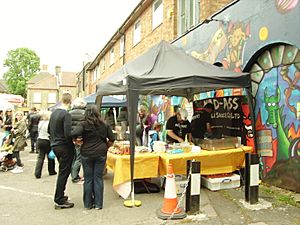 Crystal Palace still retains much of its Victorian architecture, although housing styles are mixed, including Victorian terraces, mid-war terraces and blocks of modern flats. Crystal Palace Park is surrounded by grand Victorian villas, many of which have been converted into flats and apartments.

Television transmission has been taking place from Crystal Palace since at least the 1930s and two TV transmitter towers — Crystal Palace Transmitter – 640 feet (200 m) tall — and Croydon Transmitter – 500 feet (150 m) tall — stand on the hill at Upper Norwood, making the district a landmark location visible from many parts of the London area. The towers may appear similar in height and design, but the Crystal Palace mast, constructed in 1956, stands on a slightly higher elevation. The current Croydon tower was built in 1962. 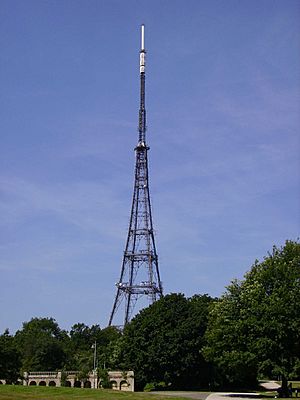 The Crystal Palace Transmitter, at 219 metres tall, is the fourth tallest structure in London, behind the Shard, One Canada Square and Heron Tower. 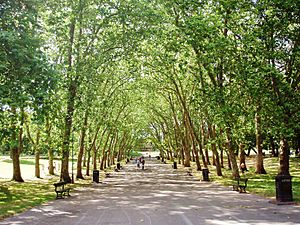 The park is situated halfway along the Norwood Ridge at one of its highest points. This ridge offers views northward to central London, east to the Queen Elizabeth II Bridge and Greenwich, and southward to Croydon and the North Downs.

It is also one of the starting points for the Green Chain Walk, linking to places such as Chislehurst, Erith, the Thames Barrier and Thamesmead. Section 3 of the Capital Ring walk round London goes through the park. 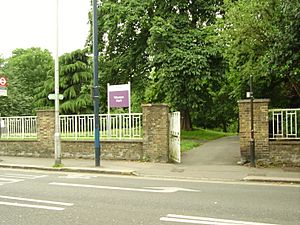 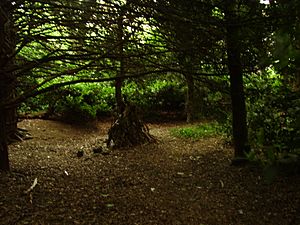 To the south of the triangle is a small area of woodland occupying 1.92 hectares, containing the Stambourne Woodland Walk. It was opened in 1984 and covers an area of land between developments on Stambourne Way and Fox Hill. The land originally formed the gardens of Victorian villas built on the hill overlooking Croydon, but fell into disrepair. In 1962 Croydon Council approved terms for buying the land from the Church Commissioners and other local freeholders, allowing the construction of a link. Paths and benches were installed but much of the vegetation was left undisturbed, creating a woodland pathway.

On the Church Road/ Westow Street corner is an ornate Greek Orthodox Church which serves the Greek Cypriot and Orthodox community of the surrounding area. Formally an Anglican church, the walls are now dressed in ornate Byzantine-style art. 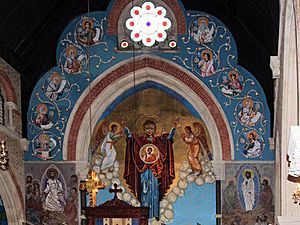 As the name Crystal Palace is relatively new, the borders of the area are not clearly defined and include parts of Anerley, Dulwich Wood, Gipsy Hill, Penge, South Norwood, Sydenham and Upper Norwood. Crystal Palace lies approximately eight miles (13 km) to the south east of Charing Cross on the Norwood Ridge and includes one of the highest points of London at 112 metres above the mean sea level (OS map reference TQ337707). The Crystal Palace National Sports Centre, in the centre of the park, lies at 88 metres above the mean sea level. The soil in the area has been classified as typically "Slowly permeable, seasonally wet, slightly acid but base-rich loamy and clayey soils", with impeded drainage, moderate fertility and a loamy profile. The nearest Met Office climate station is based in Greenwich Park.

The area is served by the A212, A214, A234 and A2199 roads. The roads that make up the triangle (Westow Hill, Westow Street and Church Road) form part of a one-way system and are in a 24-hour controlled parking and loading zone. There is a coach park inside Crystal Palace Park.

London Cycle Network routes 23 and 27 travel through Crystal Palace. Route 27 runs from Anerley Hill through part of Crystal Palace Park towards Bromley and route 23 through the Crystal Palace triangle to connect to Borough and Croydon. 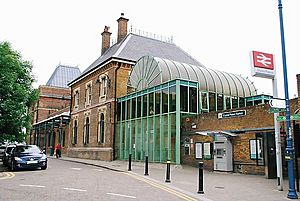 Crystal Palace is accessible by rail from Crystal Palace railway station, where Southern trains run between Victoria on the Crystal Palace Line and London Bridge on the Brighton Main Line, and where London Overground trains run to Highbury & Islington on the East London Line. In addition, Southern services run to Beckenham Junction, Sutton and Epsom Downs. Crystal Palace railway station is one of the few stations to border two zones, Zones 3 and 4. The South Gate of the Park is accessible by rail via Penge West, which is served by Southern trains from London Bridge and London Overground services. 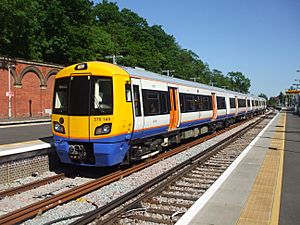 The low level station remained open, although passenger numbers at that station also fell after the fire of 1936 and many services were diverted to serve London–Croydon routes instead of the Victoria–London Bridge route. Rail travel was in decline across the UK in the 1960s and 1970s when the Beeching Axe was imposed. During the 1970s, two outer platforms used by terminating trains were abandoned and the third rail was removed.

More recently rail travel at the station has seen a resurgence and new services have started running. Passenger numbers increased each year between 2004 and 2013. Since May 2010, the station has served the East London Line branch of the London Overground, connecting with the Docklands and Shoreditch. In 2011 services were extended to Highbury and Islington. The station underwent redevelopment in 2012, which brought the original Victorian booking hall back into use, created a new cafe in the station building and provided wheelchair access through the installation of three lifts; this work was completed by the end of March 2013.

There have been past proposals to connect the Croydon Tramlink to Crystal Palace, with mayoral candidates citing the desirability of the initiative. 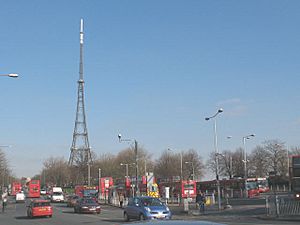 The nearest major international airports are Heathrow and Gatwick. London City Airport and Biggin Hill Airport are also nearby.

All content from Kiddle encyclopedia articles (including the article images and facts) can be freely used under Attribution-ShareAlike license, unless stated otherwise. Cite this article:
Crystal Palace, London Facts for Kids. Kiddle Encyclopedia.