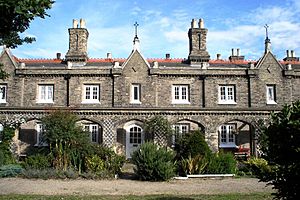 Penge is a suburb of south east London in the London Borough of Bromley. It has entered popular culture as the archetypal commuter suburb, but was a fashionable entertainment district in the 19th century and saw notorious murders in the 1870s. Notable residents have included Bill Wyman of The Rolling Stones, Prime Minister Andrew Bonar Law and painter Camille Pissarro. Penge is made up of the Penge and Cator Ward which had a Population of 17,326 in 2011.

Penge was once a small town, which was recorded under the name Penceat in an Anglo-Saxon deed dating from 957. Most historians believe the name of the town is derived from the Celtic word Penceat which means "edge of wood" and refers to the fact that the surrounding area was once covered in a dense forest. The original Celtic words of which the name was composed referred to "pen" ("head"), as in the Welsh "pen", and "ceat" ("wood"), similar to the Welsh "coed", as in the name of the town of Pencoed in Wales.

Pensgreene and the Crooked Billet

Penge was an inconspicuous area with few residents before the arrival of the railways. A traveller passing through Penge would have noticed the large green with a small inn on its boundary. Penge Green appears as Pensgreene on Kip's 1607 map. The green was bounded to the north by Penge Lane, the west by Beckenham Road and the southeast by the Crooked Billet. On a modern map that area is very small area but the modern day Penge Lane and Crooked Billet are not in their original locations and Beckenham Road would have been little more than a cart track following the property line on the west side of Penge High Street. Penge Lane was the road from Penge to Sydenham which is now named St John's Road and Newlands Park Road. There was also an old footpath crossing the Green leading to Sydenham that was known as Old Penge Lane. After the London, Chatham and Dover Railway was built, Penge Lane crossed the line by level crossing. When this crossing was closed Penge Lane was renamed and Old Penge Lane became the present day Penge Lane.

The 1868 Ordnance Survey map shows the Old Crooked Billet located to the southeast of the current location. This earlier location was on the eastward side of Penge Green, which disappeared as a result of The Penge Enclosure Act, 1827 which enclosed the whole Green. This left the Crooked Billet with no frontage to Beckenham Road, so new premises were constructed on the present site in 1827 and subsequently replaced in 1840 with a three-storey building. This was severely damaged by enemy action in World War II and subsequently rebuilt.

The Crooked Billet is by far the oldest public house in Penge. Peter Abbott states that it was there in 1601 and speculates that it might be much more ancient. In modern times it is particularly well known for lending its name as a bus route terminus. From 1914 General Omnibus routes 109 and 609 both operated between Bromley Market and the Crooked Billet following different routes. The 109 was renumbered 227 by London Transport and continued to terminate at the Crooked Billet. (Route 609 was shortened terminating in Beckenham ). Around 1950 some services were extended past the Crooked Billet to the Crystal Palace. Eventually nearly all buses traveled the extended route. The 354 buses now use the terminus, as do so short running buses on route 194 which carry the destination 'Penge High Street'.

William Hone wrote about a visit to the Crooked Billet in 1827 and included a detailed sketch of the last building on the original site.

The London and Croydon Canal was built across Penge Common along what is now the line of the railway through Penge West railway station, deviating to the south before Anerley railway station. There is a remnant at the northern corner of Betts Park, Anerley. Following the closure of the canal, the London and Croydon Railway was built largely along the same course, opening in 1839. Isambard Kingdom Brunel built an Atmospheric Railway along this alignment as far as Croydon. The Crystal Palace pneumatic railway underground between the Sydenham and Penge entrances to Crystal Palace park operated for a short while but proved not to be economically viable..

In the Victorian era, Penge developed into a fashionable suburb because of the railway line and its proximity to the relocated Crystal Palace. It became a fashionable day out to visit the Crystal Palace during the day and to take the tram down the hill to one of the 'twenty-five pubs to the square mile' or two Music Halls—The King's Hall (later the Gaumont cinema) and. in 1915. the Empire Theatre (later the Essoldo cinema).

By 1862 Stanford's map of London shows large homes had been constructed along Penge New Road (now Crystal Palace Park Road, Sydenham and Penge High Street), Thick Wood (now Thicket) Road and Anerley Road. This all came to an end in 1875 and 1877 with the notorious Penge murders. In 1875 Frederick Hunt murdered his wife and children then in 1877 a wealthy heiress, Harriet Staunton, together with her infant son, was starved to death by her husband and his associates. In 1934, Elizabeth Jenkins published the novel Harriet, based on the case, whilst Forbes Road was renamed to Mosslea Road because of its connection with the murders.

It borders the London Borough of Lewisham. It lies west of Bromley and north east of Croydon, and is located 7.1 miles (11.4 km) southeast of Charing Cross. The largest amosite mine in the world, in South Africa, was named Penge because apparently one of the British directors thought the two areas were similar in appearance. 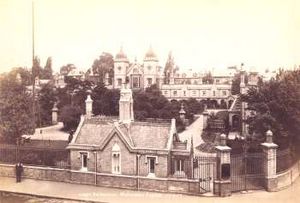 All content from Kiddle encyclopedia articles (including the article images and facts) can be freely used under Attribution-ShareAlike license, unless stated otherwise. Cite this article:
Penge Facts for Kids. Kiddle Encyclopedia.