Kids Encyclopedia Facts
This page is about the town in London, England. For other uses, see Beckenham (disambiguation).

Beckenham is a town in Greater London, England, within the London Borough of Bromley and the historic county of Kent. It is located 8.4 miles (13.5 km) south-east of Charing Cross, situated north of Elmers End and Eden Park, east of Penge, south of Lower Sydenham and Bellingham, and west of Bromley and Shortlands. Its population at the 2011 census counted 46,844 inhabitants.

Beckenham was, until the coming of the railway in 1857, a small village, with most of its land being rural and private parkland. John Barwell Cator and his family began the leasing and selling of land for the building of villas which led to a rapid increase in population, between 1850 and 1900, from 2,000 to 26,000. Housing and population growth has continued at a lesser pace since 1900.

The town, directly west of Bromley, has areas of commerce and industry, principally around the curved network of streets featuring its high street and is served in transport by three main railway stations — nine within the post town — plus towards its western periphery two Tramlink stations. In common with the rest of Bromley, the largest borough of London by area, Beckenham has several pockets of recreational land which are a mixture of sports grounds, fishing ponds and parks.

The settlement is referred to as Bacheham in the Domesday Book of 1086, and in the Textus Roffensis as Becceham. The name is thought to derive from Beohha's homestead (Beohhan + ham in Old English). The name of the small stream here - the River Beck - is most likely to have been named after the village. 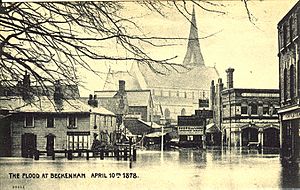 Although early written history tells little of the area, archaeological evidence at Holwood Park, where Stone Age and Bronze Age artifacts have been found, reveals some evidence of early settlers. A Roman camp was sited here, and a Roman road, the London to Lewes Way passed through the district.

With the arrival of the Normans, the Manor of Beckenham took on added importance, and controlled much of what is modern Beckenham. St George's Church was built in the 12th century. In the Middle Ages, the manor lands were divided: at this time the estates of Kelsey and Langley came into being. Beckenham still remained a small village until well into the 19th century. The beginning of its growth began when, in 1773, John Cator built Beckenham Place and became Lord of the Manor. After he died in 1807, his sons soon became aware that the area in such close proximity to London was ripe for development, especially once the railway had arrived in 1857; and large villas began to be built around the new station. Wide roads and large gardens epitomised these properties.

Between then and the early 20th century, further growth of Beckenham took place: the Shortlands area in 1863; Clock House in the 1890s; Elmers End in 1911 (where smaller suburban houses were built); Park Langley in 1908; and Eden Park in 1926. The Manor of Foxgrove was also broken up at some point: its name is commemorated in a local road.

Beckenham is a suburb and a town in its own right with a non-bypassed non-pedestrianised high street on a route between the rest of the borough and South London and has spread about its centre on 15 pre-1850 houses which are listed buildings. 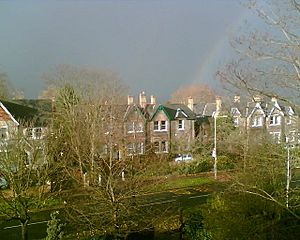 The original village of Beckenham was a cluster of development in its own fields at what is now the north. Around it were the great manorial estates: Beckenham, Kelsey and Langley Halls and Parks.

The River Ravensbourne flows northwards at the eastern side of the town, towards its confluence with the River Thames. A small stream, the River Beck, passes through the town before joining the Ravensbourne further north.

The area is part of an outcrop of London Clay and consists of many small hills.

One of the interesting landmarks in Beckenham is the Chinese Garage, now a listed building. It is built in an unusual Japanese pagoda style and deals Peugeot and Kia cars. There is also St George's Church, dating back to 1100 but mostly rebuilt at the end of the 19th century. The lych gate dates from the 13th century, and is one of the oldest in England; the almshouses date back to 1694. There are two old pubs, Ye Olde George Inn (1662), and the Three Tuns (now a branch of Zizzi restaurants).

Kelsey Park is another landmark. It was part of the Kelsey Estate, but the mansion no longer remains. The only surviving buildings are the two Grade II listed lodge cottages at the entrance, which are over 200 years old. 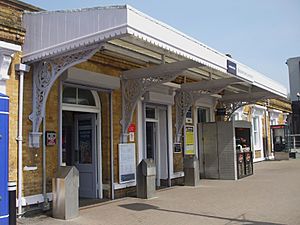 Beckenham Junction and Kent House have excellent services into central London every 15 minutes, taking just 13 minutes to Brixton and 21 minutes to London Victoria.

Tramlink Route 2 serves Beckenham with services from Beckenham Junction to West Croydon. Birckbeck station serves both the tram and rail services, the stop of Elmer's or Elmers End which is associated with Beckenham and shares its Clockhouse ward.

Beckenham is served by several Transport for London buses that link the town with other areas including Bromley, Catford, Chislehurst, Croydon, Crystal Palace, Eltham, Lewisham, Sydenham, West Wickham and Woolwich. 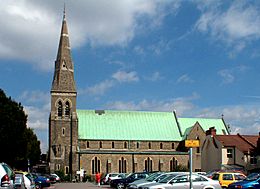 The town has a number of places of worship. St. George's Church is the principal parish church, and is in the centre of Beckenham. It was extensively rebuilt, at the end of the 19th century, but an earlier building dates back to 1100. It has a 13th century lych gate that is thought to be one of the oldest in England. The almshouses next to the church go back to 1694. There are also three other Anglican churches in the town: All Saints Church; Holy Trinity Church; and St James at Elmers End. In addition, there are Methodist and Baptist churches; and the Roman Catholic church dedicated to St Edmund of Canterbury.

Strictly defined to its historic parish area translated to today's modern wards of the United Kingdom, Beckenham covers four such wards, however as a post town it contains more than 82,000 people as at the 2011 census. 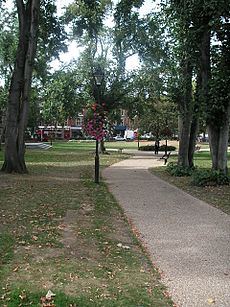 There is a museum and archives at Bethlem Royal Hospital. The local Odeon cinema has six screens and is a grade II listed building. In common with most towns of its size, Beckenham has a number of leisure organisations and societies; whilst the Beckenham Festival of Music and Dancing takes place every November. Beckenham Theatre exists to put on amateur productions. The Beckenham Concert Band is a successful community wind band which has, over the last 35 years, raised thousands of pounds for local and national charities. It caters for amateur wind and brass musicians and performs locally during the winter months and across London and the South East during the summer.

The South East London Green Chain, a long-distance footpath is well represented in Beckenham. Both Cator Park and Beckenham Place Park form part of the Chain. There are other open spaces in the town, including Croydon Road Recreation Ground and Kelsey Park. South Norwood Country Park abuts the town to the south-west. There is also a walk starting in Cator Park, going down the High Street, through Kelsey Park, then Croydon Road Recreation Ground and back to Cator Park. In the town centre there is Beckenham Green. 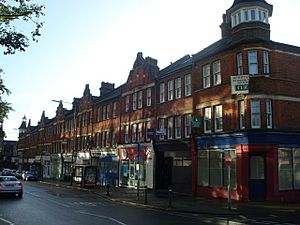 Despite its leafy image, Beckenham's close proximity to Central London and generous provision of transport links, make Beckenham a good business location. The town's busy high street contains many restaurants and upmarket chains, as well as family-run independents, and the area has a good selection of well-performing schools. Beckenham is the headquarters to Capita Registrars Limited who provide share registration services for more than half of the UK's quoted companies, Proper Records, the UK's biggest independent music distributor, and Vizual a leading HR software developer.

Main page: List of schools in the London Borough of Bromley 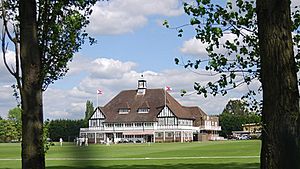 From 1886 to 1996, the club also staged the Kent Championships, an international tennis tournament, which featured many of the world's top players because it opened the grass-court season building up to The Championships at Wimbledon. In June 1968, the club held the world's first "open" grass-court tournament - one month after the sport became open to amateur and professional players - with Australians Fred Stolle and Margaret Court winning the singles titles. Beckenham Cricket Club is also the home to Bromley and Beckenham Hockey Club.

Beckenham Rugby Football Club is a rugby union club formed originally in 1894. It fields six senior men's teams a successful women's team, and also has one of the largest youth sections in the South East.

Beccehamians RFC, a rugby union club founded in 1933, plays competitive rugby at Sparrows Den, at the bottom of Corkscrew Hill near West Wickham.

Swimmers from Beckenham Swimming Club, established in 1893, have gained medals in the 21st century at national and international levels.

Numerous prominent personages were born or have lived in Beckenham. In the world of politics and governance, these include the colonial administrator George Eden, 1st Earl of Auckland (1784–1849), politician and diplomat William Eden, 1st Baron Auckland (1745–1814), Admiral of the Royal Navy Sir Peircy Brett (1709–1781), CSgt Frank Bourne of Rorke's Drift (who lived at 16 King's Hall Road, Beckenham and is buried in Beckenham Cemetery), eminent judge Wilfred Greene, 1st Baron Greene (1883–1952 – born at 8 Fox Grove Road) and Fr. Thomas Pelham Dale SSC, an Anglo-Catholic clergyman prosecuted for Ritualist practices in the 1870s. Former British Prime Minister John Major lived at West Oak in Beckenham with his wife Norma from 1974 to 1978.

A noteworthy musician associated with the area was David Bowie (1947–2016), who lived at 42 Southend Road from 1969 to 1973. Others include Rolling Stones bassist Bill Wyman, who went to school in Beckenham, Peter Frampton, who was born in Beckenham, the Dutch singer Wende Snijders; and the pop/rock musician David Sylvian, who was born in the town but raised in nearby Catford.

All content from Kiddle encyclopedia articles (including the article images and facts) can be freely used under Attribution-ShareAlike license, unless stated otherwise. Cite this article:
Beckenham Facts for Kids. Kiddle Encyclopedia.