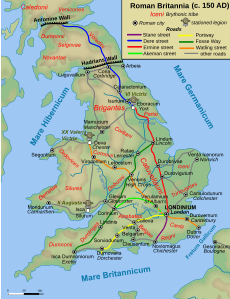 Map of Roman roads in Britain

Roman roads, together with Roman aqueducts, and the Roman army, were the three of the most impressive features of the Roman Empire in Britain.

In Britannia, as in other provinces, the Romans constructed a network of paved trunk roads (surfaced highways) during their nearly four centuries of occupation (43 – 410 AD). There are about 2,000 miles of Roman roads in Britain shown on the Ordnance Survey's Map of Roman Britain. This contains the most accurate and up-to-date layout of certain and probable routes that is readily available to the general public.

The pre-Roman Britons used unpaved trackways, including very ancient ones running along the ridges of hills, such as the South Downs Way, now a public long-distance footpath. In contrast, most of the Roman network was surveyed and built from scratch, with the aim of connecting key points by the most direct possible route. The roads were all paved, to permit heavy freight-wagons to be used in all seasons and weather.

Most of the known network was complete by 180 AD. Its main purpose was to allow the rapid movement of troops and military supplies. It was also vital for trade and the transport of goods.

Roman roads remained in use as trunk roads for centuries after the Romans withdrew from Britain in 410 AD. Systematic construction of paved highways did not resume in England until the 18th century. 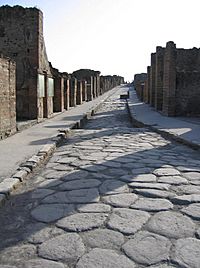 A Roman street in Pompeii

The Romans became expert at constructing roads, which they called viae. It was permitted to walk or drive cattle, vehicles, or traffic of any description along the road. The viae differed from the many other smaller or rougher roads, bridle-paths, drifts, and tracks. By law, the minimum width of a via was fixed at 2.4 m where it was straight, and 4.9 m where it turned.

The best sources of information as regards the construction of a regulation via munita are:

After the civil engineer looked over the site of the proposed road and determined roughly where it should go, the agrimensores went to work surveying the road bed. They used two main devices, the rod and a device called a groma, which helped them obtain right angles. The rod men put down a line of rods called the rigor. A surveyor looked along the rods and told the gromatici to move them as required. Using the gromae they then laid out a grid on the plan of the road.

The libratores then began their work using ploughs and, sometimes with the help of legionaries, with spades dug down to bed rock or at least to the firmest ground they could find. The excavation was called the fossa, "ditch". The depth varied according to terrain.

In top-quality roads, there were five layers, plus footpaths and kerbstones:

The method varied according to place, materials available and terrain, but the plan was always the same. The roadbed was layered. The road was constructed by filling the ditch. This was done by layering rock over other stones.

Into the fossa was dumped large amounts of rubble, gravel and stone, whatever fill was available. Sometimes a layer of sand was put down, if it could be found. When it came to within 1 yd (1 m) or so of the surface it was covered with gravel and tamped down, a process called pavire, or pavimentare. The flat surface was then the pavimentum. It could be used as the road, or additional layers could be constructed. A statumen or "foundation" of flat stones set in cement might support the additional layers.

The final steps used concrete, which the Romans had rediscovered (it had been used in Ancient Egypt). They seem to have mixed the mortar and the stones in the fossa. First a small layer of coarse concrete, the rudus, then a little layer of fine concrete, the nucleus, went onto the pavement or statumen. Into or onto the nucleus went a course of polygonal or square paving stones, called the summa crusta. The crusta was crowned for drainage.

An example is found in a early basalt road by the Temple of Saturn on the Clivus Capitolinus. It had travertine paving, polygonal basalt blocks, concrete bedding (substituted for the gravel), and a rain-water gutter.

All content from Kiddle encyclopedia articles (including the article images and facts) can be freely used under Attribution-ShareAlike license, unless stated otherwise. Cite this article:
Roman roads in Britain Facts for Kids. Kiddle Encyclopedia.