Kids Encyclopedia Facts
Not to be confused with Icknield Way. 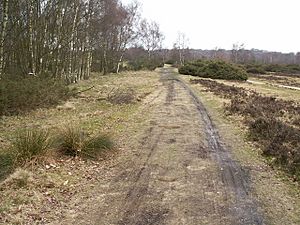 A part of Icknield Street in Sutton Park

Icknield Street or Ryknild Street is a Roman road in Britain that runs from the Fosse Way at Bourton on the Water in Gloucestershire to Templeborough in South Yorkshire. It passes through Alcester, Birmingham, Lichfield and Derby.

Four Roman roads are named in the Laws of Edward the Confessor; Watling Street, Ermine Street, the Fosse Way and Hikenild (or Icknield) Street. Hikenild Street, is generally supposed to be connected with the Iceni. Various forms of the name, the earliest, in Anglo-Saxon, are Icenhilde Weg or Icenilde We. These roads are from the borders of Norfolk through Cambridgeshire, Bucks, Berks, Hants, and Wilts into Dorset. These locations however would identify the path as Icknield Way, an Iron Age trackway running from Norfolk to Dorset.

This road got the name Ryknild Street during the 12th century when it was named by Ranulf Higdon, a monk writing in 1344 in his Polychronicon. Higdon, gives the name of the fourth road as Rikenild Strete, which, he says, tends from the south-west to the north, and begins at St. David's and continues to the mouth of the Tyne, passing Worcester, Droitwich, Birmingham, Lichfield, Derby, and Chesterfield. It has borne that name, or Rigning, Reenald, or Rignall, from early times. In three of the four MSS. of Higdon, the name is given Rikenilde, Rikenyldes, and in the fourth, which is said to be one of the earliest, Hikenil Street. Trevisa's English translation (1387) calls it Rykeneldes Street. Harverfield writing in the Victoria County History of Warwickshire doubted if the road had any real and original right to either name, preferring Ryknild as no less correct, (or no more wrong) and being able to separate it from Icknield Street in Oxfordshire and Berkshire. It is now called Icknield or Ryknild Street to separate it from the older Icknield Way. A kept part of the Roman road can be seen at Sutton Park in Birmingham.

All content from Kiddle encyclopedia articles (including the article images and facts) can be freely used under Attribution-ShareAlike license, unless stated otherwise. Cite this article:
Icknield Street Facts for Kids. Kiddle Encyclopedia.