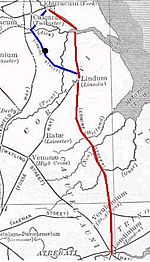 Ermine Street is the name of one of the main Roman roads in Britain. It ran from London (Londinium) to Lincoln (Lindum Colonia) and York (Eboracum). The original Roman name for the road is not known.

Ermine Street is also called the Old North Road from London to where it joins the A1 near Godmanchester.

The alternative route (in blue) was built to allow transport in all weather. The direct route crosses the River Humber, a tidal estuary of the rivers Trent and Ouse. In bad weather crossing would have been impossible. The Humber is too wide for the Romans to have built a bridge, therefore some kind of ferry must have been used.

All content from Kiddle encyclopedia articles (including the article images and facts) can be freely used under Attribution-ShareAlike license, unless stated otherwise. Cite this article:
Ermine Street Facts for Kids. Kiddle Encyclopedia.