Kids Encyclopedia Facts
This page is about the town in England. For the town in Canada, see Godmanchester, Quebec.

Godmanchester ( GOD-mən-CHES-tər) is a town and civil parish in the Huntingdonshire district of Cambridgeshire, England. It is separated from Huntingdon, 1.6 miles (2.6 km) to the north, by the valley of the River Great Ouse. Being on the Roman road network, the town has a long history. It has a waterside location, surrounded by open countryside of high value for its biodiversity but it remains highly accessible, with a railway line to London, the A1 road and M11/A14 which run nearby.

The town is on the site of the Roman town of Durovigutum. There is archaeological evidence of Celtic and earlier habitation prior to the establishment of a key Roman town and a Mansio (inn), so the area has probably been continuously occupied for more than 2000 years. The settlement was at a crossroads of Roman roads, with Ermine Street, the Via Devana (from Cambridge, between Colchester and Chester) and a military road from Sandy, Bedfordshire, all passing through. The Roman settlement was sacked by Anglo-Saxons in the third century. In contrast to Huntingdon, there have been vast amounts of archaeological finds in the centre of Godmanchester, which has two conservation areas with a large number of timber-framed Tudor houses, the largest being Tudor Farm, dating from 1600 and restored in 1995.

The mansio is mentioned in Godmanchester's name, which comes from Anglo-Saxon Godmundceaster, meaning a "town or Roman buildings associated with a man called Godmund". The location is likely to have been originally settled due to the gravel beds providing a ford across the River Great Ouse.

Godmanchester was listed as Godmundcestre in the Domesday Book of 1086 in the Hundred of Leightonstone in Huntingdonshire. The survey records that there were 26 ploughlands, with capacity for a further 31 and, in addition to the arable land, there was 160 acres (65 hectares) of meadows, 50 acres (20 hectares) of woodland and three water mills. By 1086 there was already a church and a priest at Godmanchester.

It was first chartered by King John in 1212, though it had been a market town and royal manor for some years.

A former pronunciation, a contraction of Godmundceaster, is Gunecestre. It is also pronounced as Gumster.

Population figures since 1911 are: 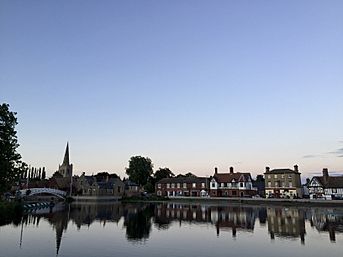 There are several bridges across the Great Ouse to Huntingdon, but until 1975 Old Bridge, Huntingdon, a medieval bridge, was the only one. It is now used only for light traffic, and a parallel footbridge has been built for pedestrians. Construction of the A14 bypass means that heavy traffic now flows over a modern bridge.

Between Godmanchester, Huntingdon and Brampton lies England's largest meadow, Portholme, which remains an important flood plain but which has served as an equestrian racecourse and centre for early aviation.

About a mile south of the town centre, on the A1198 road at is the headquarters of the Wood Green Animal Shelters - a charity dedicated to re-homing unwanted pets.

In October 2003 BBC1's Songs Of Praise was hosted by the parish church of St Mary the Virgin and featured the new hymn tune Godmanchester written by the vicar, Peter Moger. 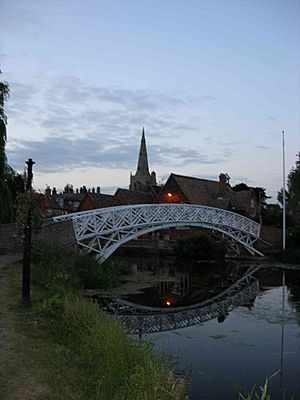 One of the town's best-known features is its Chinese Bridge which connects the town with a water meadow. Local legend has it that the bridge was built without the use of nails or any other fixings. An architect later applied to the council for permission to deconstruct the bridge to discover how exactly this had been accomplished. This being done, however, reconstruction proved impossible, as the bridge would no longer support its own weight. Today the Chinese Bridge is held together by nails. The claims are of course all false. Indeed, a bridge in Queens' College, Cambridge has the same urban myth. More likely the original nails corroded away, giving the appearance that no nails existed. With maintenance work carried out in the latter part of the 20th century, nails would have been applied to strengthen the structure.

The A14 arterial road runs 1.0 mile (1.6 km) south of Godmanchester (connecting the West Midlands to the Haven ports of Ipswich, Harwich and Felixtowe and via the M11 to London. When this route opened in 2019, the former A14 carriageway, which cut across the north edge of the town, was reclassified as the A1307. The former A14 bridge across the River Great Ouse was repurposed for local traffic.

The town centre is approximately 1.1 miles (1.8 km) from Huntingdon railway station, a semi-major stop on the East Coast Main Line. The town of Huntingdon and railway station may be accessed on foot via the expansive meadow or by National Cycle Network route 51.

Huntingdon has at least 2 buses per hour in daytime plus school buses. At least one bus per hour links the town with Cambridge directly.

All content from Kiddle encyclopedia articles (including the article images and facts) can be freely used under Attribution-ShareAlike license, unless stated otherwise. Cite this article:
Godmanchester Facts for Kids. Kiddle Encyclopedia.