Via Devana facts for kids 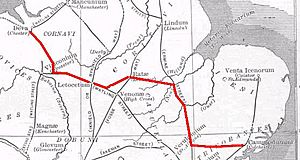 Roman Britain, with the Via Devana highlighted in red.

Via Devana is the name given to a Roman Road in England that ran from Colchester in the south-east, through Cambridge in the interior, and on to Chester in the north-west. These were important Roman military centres and it is conjectured that the main reason the road was constructed was military rather than civilian. The Latin name for Chester is Deva and 'Via Devana' is thus 'The Chester Road'. Colchester was Colonia Victricensis, 'the City of Victory', and lays claim to be the oldest Roman city in Britain. The Via Devana had little civilian rationale and the road eventually fell into disuse as it was not possible to maintain extensive public works following withdrawal of the last Roman legion from Britain in 407. As a result, its route is difficult to find today, especially in its more northern reaches. It is omitted from some historians' maps for this reason but most nowadays accept its existence. The undocumented name Via Devana was coined by Charles Mason, D.D., of Trinity College, Cambridge, who was also rector of Orwell, Cambridgeshire, and Woodwardian Professor of Fossils at Cambridge University from 1734. During his life, Mason compiled a complete map of Cambridgeshire which was later published in 1808, long after his death. 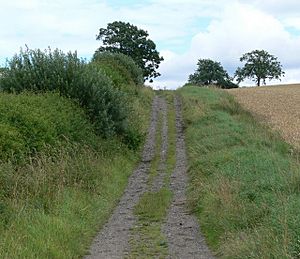 Via Devana in Leicestershire, July 2007

Its route ran north and west as follows:

There is speculation that finds in Moira indicates the Mason's route, reported in 1831, may have some factual basis.

All content from Kiddle encyclopedia articles (including the article images and facts) can be freely used under Attribution-ShareAlike license, unless stated otherwise. Cite this article:
Via Devana Facts for Kids. Kiddle Encyclopedia.