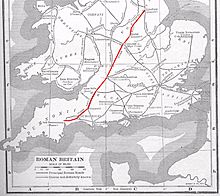 Roman Britain, with the Fosse Way in red

Fosse Way was one of the main Roman roads in Britain. Its route was unusual, because despite its length it went nowhere near London. It went directly from the south-west coast to the midland east coast. It linked Exeter (Isca Dumnoniorum) in South West England to Lincoln (Lindum Colonia) in the East Midlands. The road went via Ilchester (Lindinis), Bath (Aquae Sulis), Cirencester (Corinium) and Leicester (Ratae Corieltauvorum).

The word Fosse is derived from the Latin fossa, meaning ditch. For the first few decades after the Roman invasion of Britain in AD 43, the Fosse Way marked the western frontier of Roman rule in Iron Age Britain. It is possible that the road began as a defensive ditch that was later filled in and converted into a road, or possibly a defensive ditch ran alongside the road for at least some of its length.

It is remarkable for its extremely direct route. From Lincoln to Ilchester in Somerset is a distance of 182 miles. The road is never more than six miles from a straight line.

Fosse Way still exists. In places it is a major road, in others a country path. The A46 between Lincoln and Leicester is on the Fosse Way. From Bath to Ilchester the A37 follows the Fosse, and from Ilchester to Exeter the A30/A303 roads follow the Fosse for the most part.

The Roman road is, quite simply, the shortest route possible.

All content from Kiddle encyclopedia articles (including the article images and facts) can be freely used under Attribution-ShareAlike license, unless stated otherwise. Cite this article:
Fosse Way Facts for Kids. Kiddle Encyclopedia.