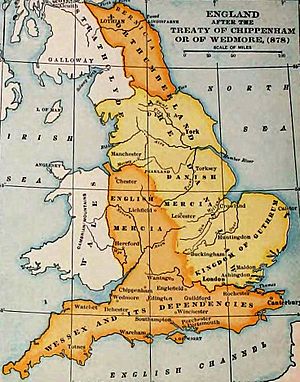 The Danelaw (from the Old English Dena lagu, Danish: Danelagen ) is an 11th-century name for an area of northern and eastern England under the administrative control of the Danish Viking empire (or Danes, or Norsemen) from the late 9th century until the early 11th century.

All content from Kiddle encyclopedia articles (including the article images and facts) can be freely used under Attribution-ShareAlike license, unless stated otherwise. Cite this article:
Danelaw Facts for Kids. Kiddle Encyclopedia.