Kids Encyclopedia Facts
This page is about the medieval English kingdom. For the modern county, see Northumberland. 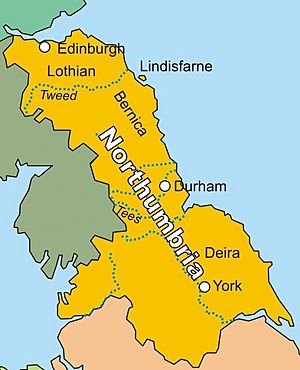 Kingdom of Northumbria in AD 802

The Kingdom of Northumbria (Old English: Norþhymbra rīce), was a medieval kingdom of the Angles, in what is now northern England and south-east Scotland. It later became an earldom in the Anglo-Saxon Kingdom of England. The name reflects the southern limit to the kingdom's territory, the River Humber.

Northumbria was formed in the early 7th century by Athelfrith, King of Bernicia. He conquered the kingdom of Deira and several British kingdoms and combined them under his rule. The kingdom of Northumbria also included Lindsey at times. Northumbria was a part of the Heptarchy of Anglo-Saxon kingdoms. At its greatest the kingdom extended at least from just south of the Humber river, to the River Mersey and to the Forth (roughly, Sheffield to Runcorn to Edinburgh). The name 'Northumbria' wasn't in common use until the time of Ecgfrith, King of Northumbria. The name is first used in the preamble to the council of Hatfield (680). Ecgfrith was described as king of the Humberfolk'. After the loss of Lindsey (kingdom) which was south of the River Humber, the name became Northumbria in Latin is Northanhymbrenis. It comes from the Old English be northan Hymbre meaning 'to the north of the Humber'. The name Northumbria was still used during the reigns of Kings Canute and Edward the Confessor. William the Conqueror broke up Northumbria into several parts. Yorkshire became the new name for the heartlands of the former kingdom.

Northumbria became an earldom when the southern part of Northumbria (which had been Deira) was lost to the Danelaw. The northern part (which had been Bernicia) was a kingdom for a short time but under the Danish kingdom it also became an earldom. Some of this land was claimed by both England and Scotland. The Earldom of Northumbria was later a part of England by the Anglo-Scottish Treaty of York in 1237. On the northern border, Berwick-upon-Tweed, which is north of the Tweed but had changed hands many times, was defined as subject to the laws of England by the Wales and Berwick Act 1746. The land once part of Northumbria at its peak is now divided by modern administrative boundaries:

All content from Kiddle encyclopedia articles (including the article images and facts) can be freely used under Attribution-ShareAlike license, unless stated otherwise. Cite this article:
Northumbria Facts for Kids. Kiddle Encyclopedia.