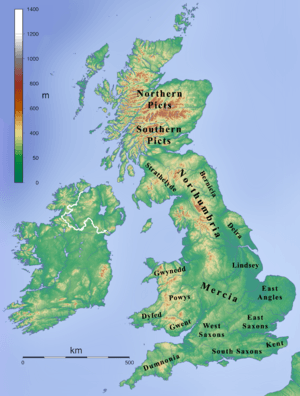 Deira (Brittonic: Dubro or dyfr ) was a kingdom in Northern England. The Anglian people living there were known as the Dere. Deira occupied the area that was later called the East Riding of Yorkshire. Deira was one of two early Anglian kingdoms north of the River Humber; the other being Bernicia, their northern neighbor. In the early 7th century they combined to become the kingdom of Northumbria.

In Roman Britain Deira was separated from Bernicia. The two had a broad area between them where no one lived. The Romans had small defensive works in this area to protect the route to Hadrian's Wall. It was a kind of no man's land after the Angles arrived. Deira first came under the control of the Angles in 560 under their leader Ella. He conquered the Britons in Deira in 581. Deira was still blocked from northward expansion by Bernicia. To the west they were blocked by the last remaining British kingdom of any size, Elmet. King Athelfrith of Bernicia united the kingdoms of Deira and Bernicia into Northumbria. In 617 Edwin of Deira defeated Elmet and expelled their king, Cerdic. Deira and Bernicia were separated again briefly after the death of King Oswald of Bernicia. His brother Oswiu of Northumbria inherited the kingship of Bernicia but did not control Deira until 651. From that time until 867, Deira was treated as a subkingdom of Northumbria. In 867 the Vikings took control of Deira.

All content from Kiddle encyclopedia articles (including the article images and facts) can be freely used under Attribution-ShareAlike license, unless stated otherwise. Cite this article:
Deira Facts for Kids. Kiddle Encyclopedia.