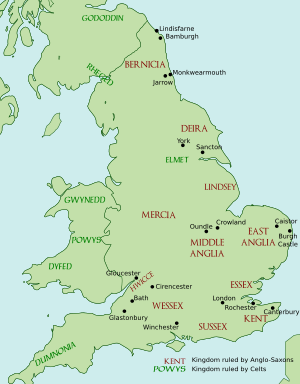 The Kingdom of Elmet between Mercia and Deira

Elmet (Old English: Elfed) was an independent Brittonic kingdom. It occupied the area of what was later the West Riding of Yorkshire. Elmet appears in records during the Early Middle Ages between the 5th century and early 7th century. Its neighbor to the east was the Anglian kingdom of Deira. The Anglian kingdom of Mercia was to the south. To the west it bordered on the Irish Sea. Elmet was the last surviving British kingdom in the early Anglo-Saxon period.

Elmet emerged from Roman Britain as a British kingdom. The Elmetsæte (people of Elmet) were listed in Tribal Hidage as 600 hides. Elmet may have originally been a subkingdom of the Brigantes. Ceredig, the last king of Elmet, was defeated in 617 by Edwin of Deira around Leeds in the south Pennines. Edwin expelled Ceredig from Elmet and from that time on Elmet was a part of Northumbria.

The kings of Elmet had a royal residence at Campodonum (possibly near Doncaster) and another at Loidis (Leeds). The Elmetsæte were apparently Christian, at least by the time they were conquered by Northumbria. Bede wrote of an abbot named Thrydwulf and his monastery in Elmet wood.

All content from Kiddle encyclopedia articles (including the article images and facts) can be freely used under Attribution-ShareAlike license, unless stated otherwise. Cite this article:
Elmet Facts for Kids. Kiddle Encyclopedia.