Kids Encyclopedia Facts
Not to be confused with Pennine Alps. 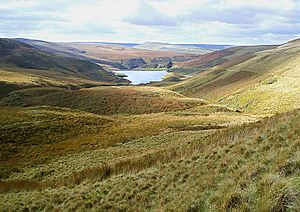 The Pennines are a mountain range in England. Often said to be the "backbone of England", they form an unbroken range stretching from the Peak District in the Midlands, through the Yorkshire Dales, parts of Greater Manchester, the West Pennine Moors of Lancashire and Cumbrian Fells to the Cheviot Hills on the Scottish border. Their total length is about 250 mi (402 km).

The name Pennines is believed to come from the Celtic pennioroches, meaning "hill", although the earliest written reference to the name dates only from the 18th century.

The landscape of the Pennines are mostly upland areas of high moorland. The Pennines make up the main watershed in northern England, dividing the eastern and western parts of the country. The rivers Eden, Ribble, and Mersey flow west towards the Irish Sea. On the other side of the watershed, the rivers Tyne, Tees, Swale, Calder, Aire, Don, and Trent flow east to the North Sea.

All content from Kiddle encyclopedia articles (including the article images and facts) can be freely used under Attribution-ShareAlike license, unless stated otherwise. Cite this article:
Pennines Facts for Kids. Kiddle Encyclopedia.