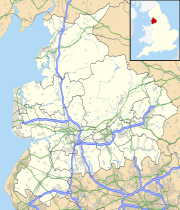 The Rossendale Valley (also called the Forest of Rossendale) is an area North West England, in Lancashire. The area is in Rossendale. It is made up of the steep valleys of the River Irwell and its tributaries. These flow from the Pennines. They then go south into Greater Manchester. They cut through the open moorland. The area has a lot of these, even though a long time ago they were called "forests".

There are two Marilyns in the hills. These are Hail Storm Hill and Freeholds Top.

The geology of the area is layers of gritstone, coal and sand and gravel left behind by glaciers. These rocks were cut by rivers, the Irwell and its tributaries, to make steep valleys. These are 600 feet high. Woodland on the steep slopes includes remnants of ancient woodland but other areas are more recently planted.

The Rossendale Valley is recognised by the steep valley of the River Irwell and its tributaries. Textile mills and chimneys and gritstone houses are what most buildings are. Roads are mostly found in the narrow valley.

The valley was part of the medieval Forest of Rossendale. People living there in the Middle Ages would have been in "booths" or farmsteads and movement into the forest would have turned them into small hamlets.

All content from Kiddle encyclopedia articles (including the article images and facts) can be freely used under Attribution-ShareAlike license, unless stated otherwise. Cite this article:
Rossendale Valley Facts for Kids. Kiddle Encyclopedia.