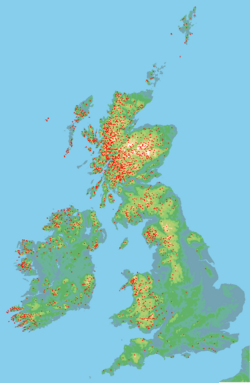 Map of Marilyns in the British Isles

A Marilyn is a mountain or hill in the British Isles (including Ireland) with a relative height of at least 150 metres (492 ft). The name was coined as an ironic contrast to the designation Munro, that is used of a Scottish mountain with a height of more than 3,000 feet, which is homophonous with (Marilyn) Monroe.

There are currently 1554 Marilyns identified in Great Britain and surrounding islands: 1214 in Scotland, 179 in England 156 in Wales and 5 on the Isle of Man.

Many of the largest hills are Marilyns, including Ben Nevis, Scafell Pike and Snowdon. On the other hand, many large hills, including some Munros, and other well-known hills are not Marilyns because they do not meet the relative height criterion.

All content from Kiddle encyclopedia articles (including the article images and facts) can be freely used under Attribution-ShareAlike license, unless stated otherwise. Cite this article:
Marilyn (hill) Facts for Kids. Kiddle Encyclopedia.