Bishop Wilton Wold is the highest point of the Yorkshire Wolds in the East Riding of Yorkshire, England. The summit, known as Garrowby Hill, lies about 5 miles (8 km) north of Pocklington.

As with most of the wolds, it is wide, flat and agricultural in nature. The A166 road passes right by the top. However it is a Marilyn (having topographic prominence of at least 150 metres [490 ft]). There is a trig point, two covered reservoirs and an aerial.

The British artist David Hockney painted the view from the summit in 1998. 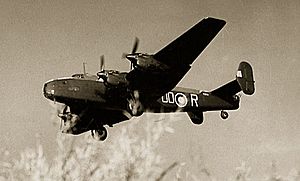 As well as the 7 aircrew who were on a training flight, a passing lorry driver was also killed. There is a memorial in a layby on the A166 at Garrowby Hill 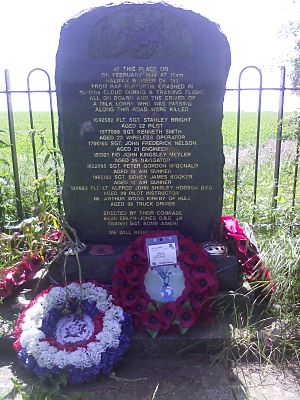 Memorial to the men killed in 1944

All content from Kiddle encyclopedia articles (including the article images and facts) can be freely used under Attribution-ShareAlike license, unless stated otherwise. Cite this article:
Bishop Wilton Wold Facts for Kids. Kiddle Encyclopedia.