Scafell Pike is the highest mountain in England. It is 978 metres (3,209 ft) tall. It is located in Lake District National Park, in Cumbria.

It is sometimes confused with the near-by Scafell. The name Pikes of Sca Fell was first used to mean the peaks now known as Scafell Pike, Ill Crag and Broad Crag. The contraction Scafell Pike started as an error on an Ordnance Survey map.

The summit was given to the National Trust in 1919 by Lord Leconfield. He did this in memory of the men of the Lake District "who fell for God and King, for freedom, peace and right in the Great War".

Scafell Pike is one of a horseshoe of high fells, open to the south, surrounding the head of Eskdale, Cumbria. It stands on the western side of the cirque, with Scafell to the south and Great End to the north. This ridge forms the watershed between Eskdale and Wasdale, which lies to the west.

The narrowest definition of Scafell Pike begins at the ridge of Mickledore in the south, takes in the wide, stony summit area and ends at the next depression, Broad Crag Col, c. 920 m (3,030 ft). A more inclusive view takes in two further tops: Broad Crag, 934 m (3,064 ft) and Ill Crag, 935 m (3,068 ft), the two being separated by Ill Crag Col. This is the position taken by most guidebooks. North of Ill Crag is the more definite depression of Calf Cove at 850 m (2,800 ft), before the ridge climbs again to Great End.

Scafell Pike is topologically unusual and unique of the three Marilyn summits of the three mainland countries of the UK.

This makes Scafell Pike a Dromedary Marilyn (a Marilyn with one subsidiary HUMP summit).  Because its Maquaco-line also encloses three other TuMP summits with their TumQuaCo-lines, Broad Crag, Ill Crag & Great End, it has a numerical rating, for the top 150 metres of the mountain, from the three prominence hill lists, of 01:02:05 ie 1 Marilyn, 2 HuMP's, 5 TuMPs, (both Ben Nevis and Snowdon are 01:01:01)

Scafell Pike also has outliers on either side of the ridge. Lingmell, to the north west, is invariably regarded as a separate fell, while Pen, 760 m (2,500 ft), a shapely summit above the Esk, is normally taken as a satellite of the Pike. Middleboot Knotts is a further top lying on the Wasdale slopes of Broad Crag, which is listed as a Nuttall.

The rough summit plateau is fringed by crags on all sides with Pikes Crag and Dropping Crag above Wasdale and Rough Crag to the east. Below Rough Crag and Pen is a further tier, named Dow Crag and Central Pillar on Ordnance Survey maps, although known as Esk Buttress among climbers.

Broad Crag Col is the source of Little Narrowcove Beck in the east and of Piers Gill in the west. The latter works its way around Lingmell to Wast Water through a spectacular ravine, one of the most impressive in the Lake District. It is treacherous in winter, as when it freezes over it creates an icy patch, with lethal exposure should you slip. Broad Crag is a small top with its principal face on the west and the smaller Green Crag looking down on Little Narrowcove. From Broad Crag, the ridge turns briefly east across Ill Crag Col and onto the shapely pyramidal summit of Ill Crag. Here, the main crags are on the Eskdale side, Ill Crag having little footing(clarify) in Wasdale.

Scafell Pike has a claim to the highest standing water in England, although Foxes Tarn on Scafell is of similar height. The water body in question is Broad Crag Tarn, which (confusingly) is on Scafell Pike proper, rather than Broad Crag. It lies at about 820 m (2,700 ft), a quarter of a mile (400 m) south of the summit. 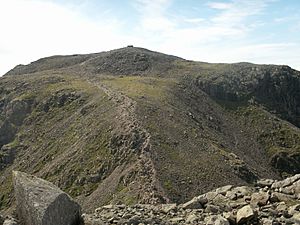 The summit of Scafell Pike, seen from neighbouring Broad Crag

The summit was donated to the National Trust in 1919 by Lord Leconfield "in perpetual memory of the men of the Lake District who fell for God and King, for freedom peace and right in the Great War 1914–1918 ...". There is a better-known war memorial on Great Gable, commemorating the members of the Fell & Rock Climbing Club.

The actual height of Scafell Pike is a matter of definition or guesswork. The highest point is buried beneath a massive summit cairn over 3 metres high and it is not known how high the fabric of the mountain rises under the cairn. Traditionally the height was given as a very memorable 3210 feet or 978.4 metres. The metric height of 978 metres converts to 3209 feet.

Scafell Pike is one of three British peaks climbed as part of the National Three Peaks Challenge, and is the highest ground for over 90 miles (145 km).

Scafell Pike consists of igneous rock dating from the Ordovician; it is geologically part of the Borrowdale Volcanics. The summit plateau of Scafell Pike, and that of other neighbouring peaks, is covered with shattered rock debris which provides the highest-altitude example of a summit boulder field in England. The boulder field is thought to have been caused in part by weathering, such as frost action. Additional factors are also considered to be important; however, opinion varies as to what these may be. James Clifton Ward suggested that weathering with earthquakes as a secondary agent could be responsible, while John Edward Marr and Reginald Aldworth Daly believed that earthquakes were unnecessary and suggested that frost action with other unspecified agents was more likely. To the north of the summit are a number of high altitude gills which flow into Lingmell Beck. These are good examples in Cumbria for this type of gill and are also biologically important due to their species richness.

Scafell Pike is a popular destination for walkers. There is open access to Scafell and the surrounding fells, with many walking and rock climbing routes. Paths connect the summit with Lingmell Col to the northwest, Mickledore to the southwest, and Esk Hause to the northeast, and these in turn connect with numerous other paths, giving access to walkers from many directions including Wasdale Head to the west, Seathwaite to the north, Langdale to the east, and Eskdale to the southwest. The shortest route is from Wasdale Head, about 80 metres above sea level, where there is a climbers' hotel, the Wasdale Head Inn, made popular in the Victorian period by Owen Glynne Jones and others. According to the National Trust, as of 2014 there were over 100,000 people per year climbing Scafell Pike from Wasdale Head, many as part of the National Three Peaks Challenge.

The name Scafell is believed by some to derive from the Old Norse skalli fjall, meaning either the fell with the shieling or the fell with the bald summit, and is first recorded in 1578 in the corrupted form Skallfield. An alternative derivation is from the Old Norse "skagi", meaning a cape, headland, promontory or peninsula – so giving an etymology that aligns with Skaw in Shetland. It originally referred to Scafell, which neighbours Scafell Pike. What are now known as Scafell Pike, Ill Crag, and Broad Crag were collectively called either the Pikes (peaks) or the Pikes of Scawfell (see below regarding spelling); from many angles Scafell seems to be the highest peak, and the others were thus considered subsidiary to it. The name Scawfell Pikes was adopted "by common consent" according to Jonathan Otley, shortly before the publication of the 4th edition of his guidebook in 1830. Up to this point, England's highest mountain (its status as such was not known until the early 1800s) did not have a name of its own; it was labelled Sca-Fell Higher Top by the Ordnance Survey in their initial work in Cumbria in the first decade of the 19th century. The newly developed name reported by Otley first appeared on a published Ordnance Survey map in 1865.

Formerly the name was spelled Scawfell, which better reflects local pronunciation. This spelling has declined due to the Ordnance Survey's use of Scafell on their 1865 map and thereafter.

Views from the summit

A panorama from the summit of Scafell Pike, August 2007

Panorama of the arc from Helvellyn to Scafell in the snow of 2010. The south summit of Scafell Pike is in the foreground.

As the highest ground in England, Scafell Pike has a very extensive view, ranging from the Mourne Mountains in Northern Ireland to Snowdonia in Wales. On a clear day, the following Marilyns can be seen from the summit.

All content from Kiddle encyclopedia articles (including the article images and facts) can be freely used under Attribution-ShareAlike license, unless stated otherwise. Cite this article:
Scafell Pike Facts for Kids. Kiddle Encyclopedia.