Settle is a small market town and civil parish in the Craven district of North Yorkshire, England. Historically in the West Riding of Yorkshire, it is served by Settle railway station located near the town centre, and Giggleswick railway station which is a mile away. It is 29 miles (47 km) from Leeds Bradford Airport. The main road through Settle is the B6480, which links to the A65, connecting Settle to Skipton and Kendal. The town has a population of 2,421 according to the 2001 Census increasing to 2,564 at the 2011 Census.

Settle is thought to have 7th century Anglian origins, its name being the Angle word for settlement. Craven in the Domesday Book shows that until 1066 Bo was the lord of Settle but after the Harrying of the North (1069–1071) the land was granted to Roger de Poitou.

In 1249 a market charter was granted to Henry de Percy, 7th feudal baron of Topcliffe by Henry III. A market square developed and the main route through the medieval town was aligned on an east-west direction, from Albert Hill, Victoria Street, High Street and Cheapside and on through Kirkgate. This road led to Giggleswick where the citizens attended the parish church. The first bridge over the River Ribble was mentioned in 1498.

During the English Civil War, the Cliffords, the lords of the manor were Royalists, but their subjects were not. John Lambert of Calton in Malhamdale, was a general in Cromwell's army and his troops camped at Settle in August 1651 while on the road to an encounter in Lancaster. 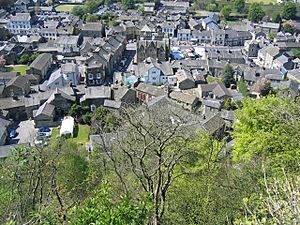 Settle was part of the West Riding of Yorkshire. It is located in Ribblesdale, at the southern edge of the Yorkshire Dales, within a few miles of the Three Peaks. Immediately overlooking the town is Castlebergh, a 300 feet (91 m) limestone crag, and to the east is Malham which was in the former Settle Rural District. The River Ribble provided power for Settle's former cotton mills, and is now being harnessed by Settle Hydro, a micro hydroelectric scheme, to provide 50 kW of power to the National Grid.

Settle's market is held weekly on Tuesdays in Victoria Hall in the town centre. Settle Town Hall was sold by Craven District Council to a developer. The Square is surrounded by local businesses, most of which are family-owned, with some offering items for sale unique to the Settle area. The Naked Man is believed to be the oldest cafe in the country.

The Settle Stories Festival brings internationally known and award winning artists to the town and boasts a range of paid for and free events suitable for all age ranges. The festival attracts visitors from around the world and audiences have more trebled in size since the first festival in 2010. In 2014 the festival was praised as one of the top 5 festivals in Yorkshire by the State of the Arts, one of the top 5 storytelling festivals to 'watch out for' by international magazine Newsweek and Settle's main event by Welcome to Yorkshire. The next festival was to run from 1 to 3 April 2016. The Settle Stories Festival is produced by Settle Stories an arts and heritage charity based in Settle Town Hall. Settle Stories also run a learning programme and the W.R. Mitchelle Archive.

The Folly is a 17th-century Grade I listed building on the main street. In 1996 the North Craven Building Preservation Trust purchased part of the Folly, restored it and opened it to the public in 2001. The Folly houses the Museum of North Craven Life and hosts exhibitions during the open season. There are permanent displays, including the Settle to Carlisle Railway, Robert (Mouseman) Thompson furniture and local history. The rest of building has been purchased by the trust. The museum is independent and run by volunteers.

The Gallery on the Green is thought to be the smallest art gallery in the world: drawings, paintings, photographs and other works are housed in a former BT telephone kiosk. Gavagan Arts at Linton Court Gallery is situated in a courtyard off Duke Street. The gallery presents a series of temporary exhibitions of modern and contemporary art.

The district has several caves where prehistoric remains have been found, the most notable being Victoria Cave, so called because the inner chamber was discovered in 1837 on the day of Queen Victoria's accession. The cave is a geological SSSI and scheduled monument. Victoria Cave contained fossil remains. The earliest, at 130,000 years old, include mammoth, straight-tusked elephant, cave bear and hippopotamus, Bos primigenius, Rhinoceros leptorhinus and spotted hyenas (as a bed of hyena bones). They date to an Upper Pleistocene interglacial. After the last Ice Age the cave was used by hibernating brown bear and reindeer. Associated with the later deposits were a harpoon head carved from antler; flint implements and other ornaments. The discovery of flint is noteworthy as it is not found naturally in the area. Craven Museum & Gallery in Skipton has an exhibition of items which includes a bear's skull found in one of the caves.

The composer Edward Elgar visited Settle on many occasions to visit his friend Dr Charles William Buck. There is a blue plaque at Cravendale to commemorate this.

All content from Kiddle encyclopedia articles (including the article images and facts) can be freely used under Attribution-ShareAlike license, unless stated otherwise. Cite this article:
Settle, North Yorkshire Facts for Kids. Kiddle Encyclopedia.