Kirkby Lonsdale is a town and civil parish in the South Lakeland district of Cumbria, England, on the River Lune. Historically in Westmorland, it lies 13 miles (21 km) south-east of Kendal on the A65. The parish recorded a population of 1,771 in the 2001 census, increasing to 1,843 at the 2011 Census. Notable buildings include St Mary's Church, a Norman building with fine carved columns. The view of the River Lune from the churchyard is known as Ruskin's View after John Ruskin, who called it one of the loveliest in England. It was painted by J. M. W. Turner.

Early signs of occupation in the area are a Neolithic stone circle on Casterton Fell and remains of Celtic settlements at Barbon, Middleton and Hutton Roof.

During the Roman occupation, a Roman road followed the course of the River Lune, linking forts at Low Borrow Bridge (near Tebay) and Over Burrow (south of Kirkby Lonsdale). A Roman milestone unearthed in 1836 and described as 'the best in the country' was re-erected on a hill near Hawkin Hall (SD 623 859), close to where it was found.

Kirkby Lonsdale developed at a crossing point over the River Lune where several drovers' and packhorse routes converged. It is one of the few Cumbrian towns mentioned in the Domesday Book, where it is described as Cherchibi (village with a church). The earlier church was wholly rebuilt by the Normans, who also erected an artificial mound or motte on nearby glebe land. A wooden tower or 'keep' would have been built on the top, and the stronghold used as a base to administer power and control over the surrounding area. In later years, the mound was used for cockfighting, hence the current name of Cockpit Hill. In 1093, Ivo de Taillebois (Baron of Kendal) gifted the church at Kirkby Lonsdale to St Mary's Abbey in York, which held it until the Dissolution. Thereupon the Abbey and all its possessions, including St Mary's Church at Kirkby Lonsdale, were granted to Trinity College, Cambridge, which retains patronage to this day.

In 1227, the town gained a market charter and the right to hold an annual fair every September. Every week, stallholders would gather on Market Street to sell their wares, with horse traders in the Horsemarket and pig sellers in Swinemarket. Thursdays were, as now, the scene of great activity as people flocked into the town to buy all manner of goods and merchandise.

The weekly market and daily throughput of drovers and packhorse carriers created a bustling town with a surprisingly large number of inns and ale houses to cater for thirsty travellers - some 29 in total, of which eight still function as licensed premises. By the early 19th century, the old market area was becoming too congested for the volume of trade, so a new marketplace was built in 1822. 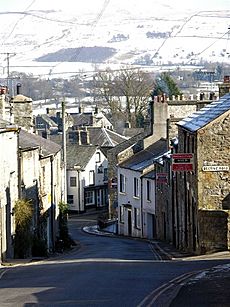 The Keighley and Kendal Turnpike of 1753 passed through Kirkby Lonsdale and there met a turnpike from Milnthorpe on the coast. In 1818 the two trusts were amalgamated. Kirkby Lonsdale railway station, 2 miles (3 km) away in Lancashire, opened in 1861 and closed to passengers in 1954.

Today, Kirkby Lonsdale bustles with activity, with a weekly market, many local events and traditional shops. The centre is a mix of elegant 18th-century buildings and stone cottages huddled around cobbled courtyards and narrow alleyways with names such as Salt Pie Lane and Jingling Lane.

Kirkby Lonsdale's secondary school, Queen Elizabeth School, specialises in the performing arts, sports and languages. The school is situated on Biggins Road, and takes pupils from ages 11 to 18.

A two-day Victorian fair used to be hosted in the town each September. The streets were closed to traffic and filled with traders' stalls, craft demonstrations and entertainment, while visitors were encouraged to wear Victorian dress. 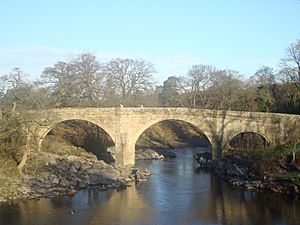 Devil's Bridge over the River Lune in Kirkby Lonsdale

The bridge was probably built by the monks of St Mary's Abbey, York. In common with many bridges of the same name, legend holds that the Devil appeared to an old woman, promising to build a bridge in exchange for the first soul to cross over it. When the bridge was finished, the woman threw bread over the bridge and her dog chased after it, thereby outwitting the Devil. Several large stones in the surrounding area, including the Great Stone of Fourstones, are ascribed to the Devil's purse-strings bursting open as he ferried masonry to build it.

It was repaired in 1705 and re-pointed in 1829 using Roman-style cement. The eastern arch was repaired in around 1869. The roadway on the bridge is only 12 feet (3.7 m) wide, insufficient for modern traffic, and with the numbers of vehicles increasing the bridge was closed to vehicular traffic in 1932. Traffic now crosses the river by the Stanley Bridge, 490 feet (150 m) to south, which was built in the 1930s. It is a grade I listed structure and a Scheduled Ancient Monument.

The section of river underneath Devil's Bridge is popular with scuba divers because of the relatively easy access and egress, deep rock pools (about 16 feet during a low swell) and good visibility. The bridge is also popular for illegal "tombstoning" (bridge diving) and at least one death has been recorded.

All content from Kiddle encyclopedia articles (including the article images and facts) can be freely used under Attribution-ShareAlike license, unless stated otherwise. Cite this article:
Kirkby Lonsdale Facts for Kids. Kiddle Encyclopedia.