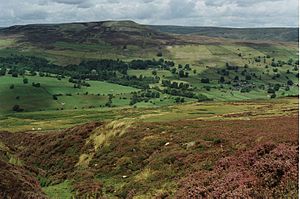 Swaledale is one of the northernmost dales (valleys) in Yorkshire Dales National Park, located in northern England. It is the dale of the River Swale on the east side of the Pennines in North Yorkshire. 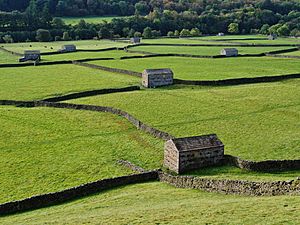 Swaledale runs broadly from west to east, from the high moors on the Cumbria–Yorkshire boundary at the watershed of Northern England to the market town of Richmond, where the dale meets the lowlands. Nine Standards Rigg, the prominent ridge with nine ancient tall cairns, rises on the watershed at the head of Swaledale. To the south and east of the ridge a number of smaller dales (Birkdale, Little Sleddale, Great Sleddale and Whitsundale) join to form the narrow valley of upper Swaledale at the small village of Keld. From there, the valley runs briefly south then turns east at Thwaite to broaden progressively as it passes Muker, Gunnerside, Low Row, Healaugh and Reeth. The Pennine valley ends at Richmond, where an important medieval castle still watches the important ford from the top of a cliff. Below Richmond, the valley sides flatten out and the Swale flows across lowland farmland to meet the Ure just east of Boroughbridge at a point known as Swale Nab. The Ure becomes the Ouse, and eventually (on merging with the Trent) the Humber.

From the north, Arkengarthdale and its river the Arkle Beck join Swaledale at Reeth. To the south, Wensleydale, home of the famous Wensleydale cheese, runs parallel with Swaledale. The two dales are separated by a ridge including Great Shunner Fell, and joined by the road over Buttertubs Pass. 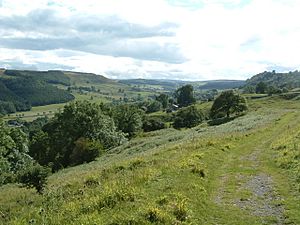 Swaledale at East Applegarth, near Richmond 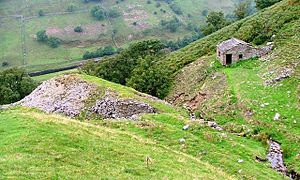 Ruined mine shop at Arn Gill

Swaledale is a typical limestone Yorkshire dale, with its narrow valley-bottom road, green meadows and fellside fields, white sheep and dry stone walls on the glacier-formed valley sides, and darker moorland skyline. The upper parts of the dale are particularly striking because of its large old limestone field barns and its profusion of wild flowers. The latter are thanks to the return to the practice of leaving the cutting of grass for hay or silage until wild plants have had a chance to seed. Occasionally visible from the valley bottom road are the slowly fading fellside scars of the 18th and 19th century lead mining industry. Ruined stone mine buildings remain, taking on the same colours as the landscape into which they are crumbling. In 1989 Swaledale (and Arkengarthdale) were designated as a Barns and Walls Conservation Area, making it the largest conservation area in the United Kingdom.

Swaledale is home to many small but beautiful waterfalls, such as Richmond Falls, Kisdon Force and Catrake Force.

Sheep-farming has always been central to economic life in Swaledale, which has lent its name to a breed of round-horned sheep. Traditional Swaledale products are woollens and Swaledale cheese, which was formerly made from ewe’s milk. These days it is made from cow’s milk. During the 19th century, a major industry in the area was lead mining carried out in Arkengarthdale and at Grinton Moor. 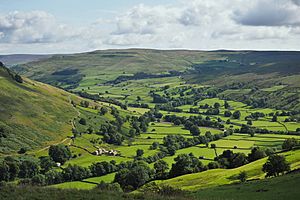 Today, tourism has become important, and Swaledale attracts thousands of visitors a year. It is very popular with walkers, particularly because the Coast to Coast Walk passes along it. Unlike Wensleydale it has no large settlements on the scale of Hawes or Leyburn, nor an obvious tourist hook such as the former's connection with James Herriot, and so, like Coverdale, it enjoys a quieter tone, especially as it is more remote compared to, say, Wharfedale, which is much further south and easily accessible from the West Yorkshire metropolis. 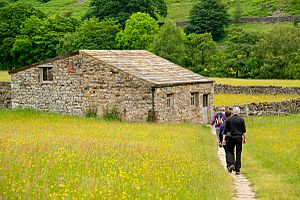 Walkers near a field barn in Muker

In May and June every year, Swaledale hosts the two-week-long Swaledale Festival, which combines a celebration of small-scale music and a programme of guided walks.

The first weekend in August sees the area host the 'Ard Rock mountain bike festival, which is based in Reeth but uses bridleways and private land in both Swaledale and Arkengarthdale.

Since 1950, Swaledale has been the host of the Scott Trial, a British motorcycle trials competition run over an off road course of approximately 70 miles, raising money for the "Scott charities", a range of local non-profit making organisations.

Ravenseat, the farm of Amanda Owen ("The Yorkshire Shepherdess"), is in Swaledale.

In a letter to Geoffrey Grigson of 17 January 1950 W. H. Auden wrote "My great good place is the part of the Pennines bounded on the S by Swaledale, on the N by the Roman wall and on the W by the Eden Valley".

All content from Kiddle encyclopedia articles (including the article images and facts) can be freely used under Attribution-ShareAlike license, unless stated otherwise. Cite this article:
Swaledale Facts for Kids. Kiddle Encyclopedia.