Richmond is a market town and civil parish in North Yorkshire, England and the administrative centre of the district of Richmondshire. Historically in the North Riding of Yorkshire, it is 16 miles (26 km) from the county town of Northallerton and situated on the eastern edge of the Yorkshire Dales National Park, and is one of the park's tourist centres. The population of Richmond according to the 2011 United Kingdom census is 8,413.

The Rough Guide describes the town as 'an absolute gem'. Betty James wrote that "without any doubt Richmond is the most romantic place in the whole of the North East [of England]". Richmond was the winner of the Academy of Urbanism's "Great Town" award in 2009.

The town of Richemont in Normandy (now in the Seine-Maritime département of the Upper Normandy region) was the origin of the placename Richmond. Richmond in North Yorkshire was the eponymous honour of the Earls of Richmond (or comtes de Richemont), a dignity normally also held by the Duke of Brittany from 1136 to 1399.

Richmond was founded in 1071 by the Breton Alan Rufus, on lands granted to him by William the Conqueror. Richmond Castle, completed in 1086, had a keep and walls encompassing the area now known as the Market Place.

Richmond was part of the lands of the earldom of Richmond, which was intermittently held by the Dukes of Brittany until the 14th century. When John V, Duke of Brittany died in 1399 Henry IV took possession. In 1453, the earldom was conferred on Edmund Tudor, and was merged with the crown when Edmund's son Henry became king, as Henry VII in 1485.

During the English Civil War, the Covenanter Army led by David Leslie, Lord Newark, took over the castle and conflict between local Catholics and Scottish Presbyterians ensued.

The prosperity of the medieval town and centre of the Swaledale wool industry greatly increased in the late 17th and 18th centuries with the burgeoning lead mining industry in nearby Arkengarthdale. It is from this period that the town's Georgian architecture originates, the most notable examples of which are to be found on Newbiggin and in Frenchgate . One of Europe's first gas works was built in the town in 1830.

A permanent military presence was established in the town with the completion of Richmond Barracks in 1877.

Panorama of Richmond falls, close to the town centre. 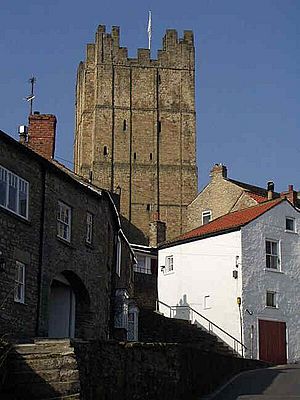 Richmond Castle in the town centre overlooks the River Swale and is a major tourist attraction. Scolland's Hall is the gatehouse and was staffed by the Lords of Bedale, such as Bryan FitzAlan, Lord FitzAlan, and Miles Stapleton, Founder KG. Other staff residences were Constable Burton and Thornton Steward. Also, Richmond had an extended Wensleydale castlery initially consisting of Middleham Castle, Ravensworth and Snape (Baron FitzHugh & Neville Baron Latymer). The Conyers, Wyville, Gascoigne, Stapleton and Lovell families were all notable gentry.

The cobbled market place is one of the largest in England.

The Green Howards Regimental Museum is in the old Trinity Church in the centre of the town's market place; the town is also home to the Richmondshire Museum.

Swale House on Frenchgate, built around 1750, was home to the headmaster and students of the nearby grammar school, before being used as a hospital for wounded officers in the First World War. For many years, it was the headquarters of Richmondshire District Council, before being closed and sold off in 2013.

The Georgian Theatre Royal, founded in 1788 by the actor Samuel Butler, is off the market place. A decline in the fortunes of theatre led to its closure in 1848 and it was used as a warehouse for many years. In 1963 the theatre was restored and reopened, with a theatre museum added in 1979. More recently, the theatre has become the Georgian Theatre Royal and was extended in 2003 with the addition of a new block providing services and access next to the original auditorium. It is one of Britain's oldest extant theatres.

To the west of the town, on the road to Marske, is the unusually named Richmond Out Moor. Nearby the town is the picturesque Easby Abbey. 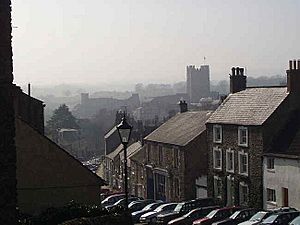 Richmond has been used as a filming location for a significant number of TV programmes & films including The Fast Show, Century Falls, Earthfasts, A Woman of Substance (1984) and All Creatures Great and Small amongst others.

Local newspapers include the weekly Darlington & Stockton Times and the daily Northern Echo. 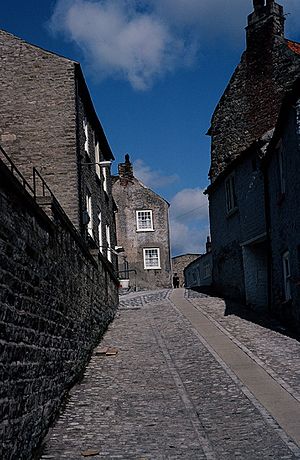 The stone terminus of Richmond Railway Station, built in a Tudor/Elizabethan style, opened in 1846 and closed in 1968, a year before the branch line itself was taken out of service. After the station closed, the building was used for many years as a garden centre. It has now been renovated by the Richmondshire Building Preservation Trust and opened in late 2007 – retitled, simply, The Station – as a mixed-use space for community and commercial activities. The newly renovated station is home to two cinema screens, an art gallery and a restaurant and café. There are also artisan food makers on the premises: The Angel's Share, Archer's Jersey Ice Cream, Lacey's Cheese, Richmond Brewing Company and Velvet Heaven.

Richmond has a frequent bus service to Darlington and Catterick Garrison, and a wide range of local bus services to nearby towns and villages including Leyburn, Northallerton and Barnard Castle.

At the end of the 18th century, some soldiers found an entrance to a tunnel underneath the castle keep. They could not fit into the tunnel, so they elected to send a regimental drummer boy. The boy was asked to walk along the tunnel and beat his drum so that above ground the soldiers could follow the noise. They did this for 3 miles before the sound stopped unexpectedly. This was never explained until centuries later, when people now believe that the roof of the tunnel collapsed and caved in on top of the drummer boy, whilst drumming along. Today a stone marks the spot the noise stopped. The entrance to the tunnel is still there, but is forbidden for anyone to go in. Today schools celebrate this local legend with children marching through town annually. Legend claims that on some cold winters night, you can still hear the faint sound of the drummer boy beneath the ground, where the stone stands.

The following table shows historic population changes in the Richmond parish area between 1801 and 1961.

As a gateway town to the Yorkshire Dales, tourism is important to the local economy, but the single largest influence is the Catterick Garrison army base, which is rapidly becoming the largest population centre in Richmondshire. National chain retailers such as Lidl, WHSmith, Boots, and the Co-op, as well as local independent shops, restaurants and pubs, also provide a source of employment. The Gallowfields Trading Estate in the north of the town accommodates several builder's merchants, car garages and showrooms, a Royal Mail delivery office and a veterinarian surgery.

A traditional market still operates every Saturday in one of the largest cobbled market places in England, as well as a week round indoor one in the town's 19th-century market hall. The origins of the markets date back as far as 1093 when they were authorised by the Earls, and the first known royal charter was granted in 1155.

The town is home to two secondary schools: Richmond School, a large school and sixth form with specialisms in performing arts, science, and mathematics, and St Francis Xavier School, which is a smaller, voluntary aided, joint Roman Catholic and Church of England School for boys and girls aged 11–16.

The town's football club, Richmond Town F.C. was founded in 1945 and they currently play in the Wearside League in level 7 of the National League System with their games being held at the Earl's Orchard ground, the pavilion was officially opened in March 1975 by then Middlesbrough F.C. manager Jack Charlton.

Richmondshire Cricket Club play in the North Yorkshire and South Durham Cricket League, where they have won the league title a total of five times and the ECB National Club Cricket Championship once, in 2018.

Richmond was also the starting point for the third stage of the 2018 Tour de Yorkshire road cycling race.

The town's racecourse opened in 1765 and closed in 1891, but the site is still used for horse training and by the public for walking. The poor condition of the grandstand led it to appear on Historic England's Heritage at Risk register in 2019.

The town is served by two local newspapers, North Yorkshire editions of the daily Northern Echo and the weekly Darlington & Stockton Times both published by Newsquest.

Richmond has been used as a filming location for a number of television programmes and films including The Fast Show, Century Falls, Earthfasts, A Woman of Substance (1984) and All Creatures Great and Small.

The official gallery of Middlesbrough born artist Mackenzie Thorpe is located in town, Richmond local Lucy Pittaway was also chosen as the official artist for the Tour de Yorkshire from 2016 to 2018.

Richmondshire Concerts is a classical music society that puts on six concerts a year, generally of chamber music, at the Influence Church. The society has an average of 250 annual subscribers from North Yorkshire and the North East.

Richmond Live was an annual music festival held every August on a riverside venue known as "The Batts", notable headliners included The Lightning Seeds and The Hoosiers. The festival was cancelled permanently by the organisers following the 2019 event due to a lack of sustainability.

Richmond has a two-screen cinema that opened in 2007 in the former railway station the town was also home to the one screen Zetland Cinema, between from 1937 until its closure in 1983, the building was then sold to become a religious centre for the local Pentecostal Church, as of 2020 it is owned by the Influence Church, and also houses a food bank serving the local area.

The Georgian Theatre Royal in Richmond, built in 1788, is the UK's most complete 18th century theatre. A decline in the fortunes of theatre led to closure in 1848 and it was used as a warehouse until 1963 when the theatre was restored and reopened, with a museum added in 1979, after renovation in 2003, a new block providing services and access was added next to the original auditorium.

The Richmond Meet is an annual fair taking place every Whit Monday, consisting of a parade and the arrival of amusement rides into the market place, in 2019 it ran for the 127th time, but was cancelled in 2020 and 2021 due to the COVID-19 pandemic.

Richmond has been twinned with Vinstra, Norway since 1988, and Saint-Aubin-du-Cormier, France since 2006.

All content from Kiddle encyclopedia articles (including the article images and facts) can be freely used under Attribution-ShareAlike license, unless stated otherwise. Cite this article:
Richmond, North Yorkshire Facts for Kids. Kiddle Encyclopedia.