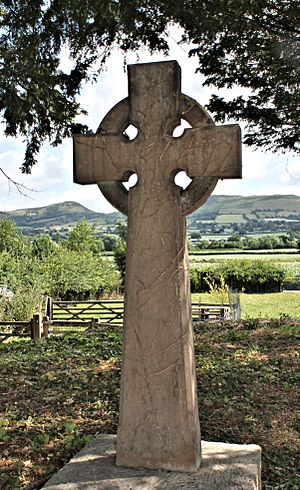 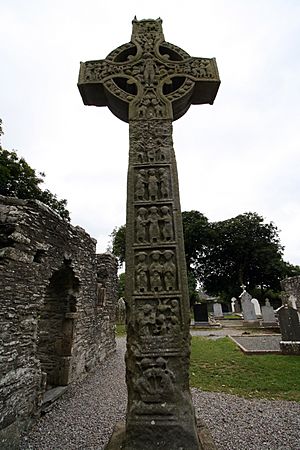 A high cross at Monasterboice in Ireland

The Celtic cross is a form of Christian cross featuring a nimbus or ring that emerged in Ireland and Britain in the Early Middle Ages. A type of ringed cross, it became widespread through its use in the stone high crosses erected across the islands, especially in regions evangelized by Irish missionaries, from the 9th through the 12th centuries.

A staple of Insular art, the Celtic cross is essentially a Latin cross with a nimbus surrounding the intersection of the arms and stem. Scholars have debated its exact origins, but it is related to earlier crosses featuring rings. The form gained new popularity during the Celtic Revival of the 19th century; the name "Celtic cross" is a convention dating from that time. The shape, usually decorated with interlace and other motifs from Insular art, became popular for funerary monuments and other uses, and has remained so, spreading well beyond Ireland. 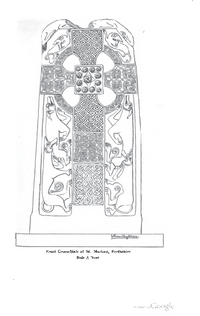 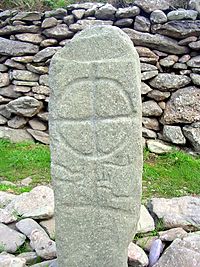 Ringed crosses similar to older Continental forms appeared in Ireland and Scotland in incised stone slab artwork and artifacts like the Ardagh chalice. However, the shape achieved its greatest popularity by its use in the monumental stone high crosses, a distinctive and widespread form of Insular art. These monuments, which first appeared in the 9th century, usually (though not always) take the form of a ringed cross on a stepped or pyramidal base. The form has obvious structural advantages, reducing the length of unsupported side arms. There are a number of theories as to its origin in Ireland and Britain. Some scholars consider the ring a holdover from earlier wooden crosses, which may have required struts to support the crossarm. Others have seen it as deriving from indigenous Bronze Age art featuring a wheel or disc around a head, or from early Coptic crosses based on the ankh. However, Michael W. Herren, Shirley Ann Brown, and others believe it originates in earlier ringed crosses in Christian art. Crosses with a ring representing the celestial sphere developed from the writings of the Church Fathers. The "cosmological cross" is an important motif in Coelius Sedulius's poem Carmen Paschale, known in Ireland by the 7th century.

It is not clear where the first high crosses originated. The first examples date to the about the 9th century and occur in two groups: at Ahenny in Ireland, and at Iona, an Irish monastery off the Scottish coast. The Ahenny group is generally earlier. However, it is possible that St. Johns Cross at Iona was the first high cross; Iona's influence as a center of pilgrimage may have led this cross to inspire the Ahenny group as well as other ringed crosses in Pictish stones.

A variety of crosses bear inscriptions in ogham: an early medieval Irish alphabet. Standing crosses in Ireland and areas under Irish influence tend to be shorter and more massive than their Anglo-Saxon equivalents, which have mostly lost their headpieces. Irish examples with a head in cross form include the Cross of Kells, Ardboe High Cross, the crosses at Monasterboice, the Cross of the Scriptures, Clonmacnoise and those in Scotland at Iona and the Kildalton Cross, which may be the earliest to survive in good condition. Surviving, free-standing crosses are located in Cornwall, including St Piran's cross at Perranporth, and Wales. Other stone crosses are found in the former Northumbria and Scotland, and further south in England, where they merge with the similar Anglo-Saxon cross making tradition, in the Ruthwell Cross for example. Most examples in Britain were destroyed during the Protestant Reformation. By about A.D. 1200 the initial wave of cross building came to an end in Ireland.

Popular legend in Ireland says that the Christian cross was introduced by Saint Patrick or possibly Saint Declan, though there are no examples from this early period. It has often been claimed that Patrick combined the symbol of Christianity with the sun cross to give pagan followers an idea of the importance of the cross. By linking it with the idea of the life-giving properties of the sun, these two ideas were linked to appeal to pagans. Other interpretations claim that placing the cross on top of the circle represents Christ's supremacy over the pagan sun. 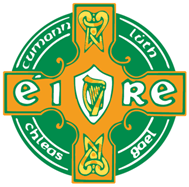 The Celtic Revival of the mid-19th century led to an increased use and creation of Celtic crosses in Ireland. In 1853, casts of several historical high crosses were exhibited at the Dublin Industrial Exhibition. In 1857, Henry O'Neill published Illustrations of the Most Interesting of the Sculptured Crosses of Ancient Ireland. These two events stimulated interest in the Celtic cross as a symbol for a renewed sense of heritage within Ireland.

New versions of the high cross were designed for fashionable cemetery monuments in Victorian Dublin in the 1860s. From Dublin, the revival spread to the rest of the country and beyond. Since the Celtic Revival, the ringed cross became an emblem of Celtic identity, in addition to its more traditional religious symbolism. Modern interest in the symbol increased because of Alexander and Euphemia Ritchie. The two worked on the Isle of Iona in Scotland from 1899 to 1940 and popularised use of the Celtic cross in jewelry. Using the Celtic cross in fashion is still popular today.

All content from Kiddle encyclopedia articles (including the article images and facts) can be freely used under Attribution-ShareAlike license, unless stated otherwise. Cite this article:
Celtic cross Facts for Kids. Kiddle Encyclopedia.