Vale of Mowbray facts for kids 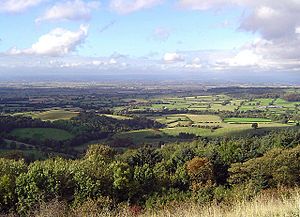 The Vale of Mowbray is distinguishable from the Vale of York by its meandering rivers and more undulating landscape.

The main characteristic of the Vale of Mowbray is the fertile agricultural land used for crops and permanent grassland, though isolated pockets of woodland remain. The roads in the Vale of Mowbray are characteristically contained by low hedges with wide verges. The villages are often linear following the major through road, the houses are generally brick built with pantile roofs.

The vale takes its name from the family who were granted the rights to the land after the Norman Conquest of 1066. Robert de Mowbray, whose family had a stronghold at Thirsk Castle, was given the land by William the Conqueror in 1086.

The Natural England definition of the boundaries of the Vale of Mowbray are the edge of the North York Moors in the east up to the A19/A172 junction; directly across to the junction at Scotch Corner on the A1(M), then straight down the A1(M) for a western boundary and the rough line from the A168 at Dishforth to Thirsk in the east.

Looking south across the Vale of Mowbray in North Yorkshire. North York Moors are in the distance and the A1(M) is on the right.

All content from Kiddle encyclopedia articles (including the article images and facts) can be freely used under Attribution-ShareAlike license, unless stated otherwise. Cite this article:
Vale of Mowbray Facts for Kids. Kiddle Encyclopedia.