Bedale is a market town and civil parish in the district of Hambleton, North Yorkshire, England. Historically part of the North Riding of Yorkshire, it is situated 34 miles (55 km) north of Leeds, 26 miles (42 km) south-west of Middlesbrough and 7 miles (11 km) south-west of the county town of Northallerton. It was originally in Richmondshire and listed in the Domesday Book as part of Catterick wapentake, which was also known as Hangshire (so named from Hang Bank in Finghall and because of the many gallows used to execute marauding Scots); it was split again and Bedale remained in East Hang. Bedale Beck is a tributary of the River Swale, which forms one of the Yorkshire Dales, with its predominance of agriculture and its related small traditional trades, although tourism is increasingly important. 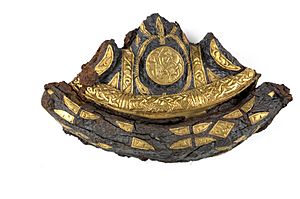 Sword Pommel from the Bedale Hoard

Before the Harrying of the North Bedale was held by Torpin (Thorfinn), a patronym retained by the infamous Dick Turpin. The parish church also dates from this time (as evidenced by its crypt), before significant remodelling. The original 9th century church escaped destruction in the Harrying of the North and was recorded in the Domesday Book. The recent discovery of the Bedale Hoard provides further evidence of high-status Anglo-Saxon and Viking age activity in the area. The town was recorded as Bedell or Bedhal and derives from 'Beda's Halh' which means the corner or place of Beda.

Under the Bretons of Richmond

After being doled out by Count Alan Le Roux to his relative Bodin of Middleham for a short time, the new market town was founded by Scollandus (Henry III later confirmed this charter), a Breton officer in an hereditary position at Richmond Castle. Bedale Hall marks the site of a castle built in the reign of King Edward I of England by Sir Bryan FitzAlan, Lord of the Manor of Bedale and later Baron FitzAlan. After contributing to the defeat of Llywelyn ap Gruffudd, FitzAlan succeeded the Earl of Surrey as Guardian and Keeper of Scotland for Edward I and fought at the Battle of Falkirk (1298) and the siege of Caerlaverock in July 1300. Fitz Alan was involved in a fight with William Wallace that led to the death of a comrade-in-arms and held the castles of Dundee and Forfar, as well as those in the Scottish Lowlands: Roxburgh Castle and Jedburgh. This baron also built Killerby Castle and Askham Bryan in Yorkshire.

Stapleton, Lovell and others

His co-heir jure uxoris, Sir Gilbert de Stapleton of Carleton, Knt, was a conspirator in the assassination of Piers Gaveston. Sir Miles Stapleton was a founding Knight of the Order of the Garter, who fought at the Siege of Calais and at the Battle of Crécy. The Stapletons were "Lollard knights" and were Lords of the Manor of Bedale for generations. Bedale had traditionally been a Lancastrian area, until the Kingmaker, Clarence and Gloucester obtained Richmond and Middleham Castles. Following the Battle of Bosworth Field, Francis Lovell, 1st Viscount Lovell led the charge of insurgency in the Yorkist Stafford and Lovell Rebellion against Henry VII of England, attainted Earl of Richmond. The inhabitants of the region went on several recusancy strikes, such as the Pilgrimage of Grace and made trouble for John Nevill, 3rd Baron Latymer (Catherine Parr's husband before Henry VIII) in Snape Castle. This continued in the Rising of the North, with Henry VII's follower Simon Digby of Aiskew executed and replaced by Ambrose Dudley, 3rd Earl of Warwick, whose wife sold it to the native Sir William Theakston & John Jackson, after which it was resold to Cavalier Henry Peirse, whose descendents are remain in town. During the English Civil War, Philip Stapleton continued in much of the same anti-Tudor & Stuart sentiment as Guy Fawkes, whose statement, when asked by one of the Scottish lords what he had intended to do with so much gunpowder, Fawkes answered him, "To blow you Scotch beggars back to your own native mountains!" Middleham Castle was subsequently ordered to be demolished by the Parliamentarians so that the Royalists could not take it again. However, there is no documentary proof that this order was ever carried out.

Lords of the Manor

The estate of Bedale and the Lordship of the Manor passed via the eldest daughter: Agnes FitzAlan, whose marriage was granted on 10 May 1306 (when she was aged just 8) to Sir Miles de Stapleton of Carlton, Yorkshire for his son:

The Lordship of Bedale Manor is currently held jointly by Lord Beaumont, heir of both FitzAlan moiety lines, but the Beresford-Peirse baronets retain distinction as having de facto possession of the manor, which was originally forfeited by Lovell's attainder and passed on to numerous installments of government figures and subsequent real estate purchasers, whether Digby of Warwickshire, Dudley of Nottinghamshire, native Theakston and Jackson, then Peirse, after which it passed by inheritance to Beresford of Derbyshire. 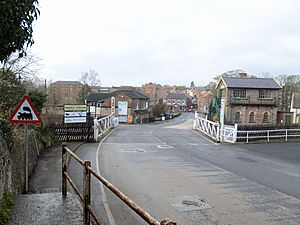 Looking into Bedale town from Aiskew across the level crossing. Bedale signal box is on the right and the bridge across Bedale Beck is just beyond the building centre left. The roadsign indicating a level crossing is incorrect - the barriers are clearly there!

Bedale lies on the B6285 road that runs south and south east from Bedale and connects with the A6055 road at Burneston. The A684 road used to go through the town but a bypass was opened in August 2016 that means through traffic now avoids Leeming Bar, Aiskew and Bedale. The town is only 2 miles (3.2 km) west of the A1(M) at Leeming Bar via the A684 road or via the adjoining village of Aiskew.

Bedale has a railway station on the Wensleydale heritage railway. The station originally opened in 1855 and lasted almost a century before British Rail closed the station in April 1954. The line stayed opened for local goods, limestone and Ministry of Defence trains and was eventually re-opened in 2003 as a heritage railway between Leeming Bar and Redmire. The station is actually in Aiskew as the traditional boundary between the two villages was Bedale Beck which the station lies east of.

Work was initiated on making Bedale Beck navigable to barges down to the River Swale at Gatenby. Initial construction started in 1768 which resulted in an area at the south end of the town known as 'The Harbour'. The plan was abandoned in 1855 when the railway was opened, but the weir and some iron moorings still exist on the beck just south of the Bedale to Aiskew road bridge.

Existing historic buildings include a unique 18th-century Leech House used as an apothecary's store for leeches, an underground ice house used for preserving food and the 14th-century Grade I listed market cross. Bedale is home to a small museum, numerous Georgian buildings and a railway station on the Wensleydale Railway, which runs to Redmire via Leyburn. The Thorp Perrow Arboretum lies nearby, as do the villages of Burneston, Burrill, Cowling, Exelby and Firby.

The town has many local shops, a Co-op Food supermarket, a Tesco Express shop, pubs and eating places along its market place. It holds a market every Tuesday on the cobbles that line the market place, and there used to be a monthly market on a Sunday, but this ceased after the bypass opened and through traffic was moved away from the town. It also has a leisure centre with full gym, swimming pool and astroturf sports pitches. Bedale Athletic Sports Association provides football, cricket, hockey, squash and tennis. Big Sheep Little Cow Farm is a petting zoo adjacent to the local railway line and Bedale Beck.

Bedale Golf Club is on the northern edge of the town where the B6285 meets the A684 road to Leyburn.

Bedale also has a brass band with a 25-year history of providing musical education and entertainment for the local community.

All content from Kiddle encyclopedia articles (including the article images and facts) can be freely used under Attribution-ShareAlike license, unless stated otherwise. Cite this article:
Bedale Facts for Kids. Kiddle Encyclopedia.