Pilgrimage of Grace facts for kids 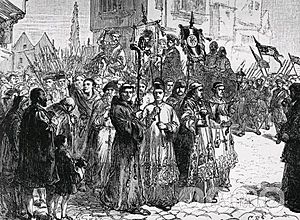 The Pilgrimage of Grace was a revolt in York, Yorkshire in 1536. People protested against England's break with Rome and the Dissolution of the Monasteries. There were also other specific political, social and economic issues they did not like. Technically the term Pilgrimage of Grace only refers to the uprising around York, but sometimes it is used in relation to the risings in general which took place around Northern England; first from Lincolnshire, twelve days before the actual Pilgrimage of Grace.

All content from Kiddle encyclopedia articles (including the article images and facts) can be freely used under Attribution-ShareAlike license, unless stated otherwise. Cite this article:
Pilgrimage of Grace Facts for Kids. Kiddle Encyclopedia.