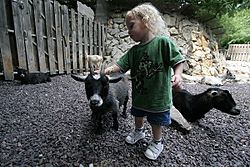 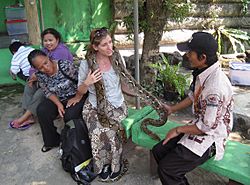 A zoo visitor interacts with a Python reticulatus at the Reptile Park in Taman Mini Indonesia Indah, Jakarta, Indonesia. 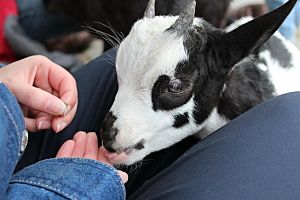 A petting zoo (often called, or part of, a "children's zoo") features a combination of domesticated animals and some wild species that are docile enough to touch and feed. In addition to independent petting zoos, also called children's farms or petting farms, many general zoos contain a petting zoo.

Most petting zoos are designed to provide only relatively placid, herbivorous domesticated animals, such as sheep, goats, pigs, rabbits, or ponies, to feed and interact physically with safely. This is in contrast to the usual zoo experience, where normally wild animals are viewed from behind safe enclosures where no contact is possible. A few provide wild species (such as pythons or big cat cubs) to interact with, but these are rare and usually found outside Western nations.

In 1938, the London Zoo included the first children's zoo in Europe and the Philadelphia Zoo was the first in North America to open a special zoo just for children.

During the 1990s, Dutch cities began building petting zoos in many neighborhoods, so that urban children could interact with animals.

Petting zoos are popular with small children, who will often feed the animals. In order to ensure the animals' health, the food is supplied by the zoo, either from vending machines or a kiosk. Food often fed to animals includes grass and crackers, and also in selected feeding areas hay is a common food. Such feeding is an exception to the usual rule about not feeding animals.

All content from Kiddle encyclopedia articles (including the article images and facts) can be freely used under Attribution-ShareAlike license, unless stated otherwise. Cite this article:
Petting zoo Facts for Kids. Kiddle Encyclopedia.