The Philadelphia Zoo, located in the Centennial District of Philadelphia, Pennsylvania, on the west bank of the Schuylkill River, was the first true zoo in the United States. Chartered by the Commonwealth of Pennsylvania on March 21, 1859, its opening was delayed by the American Civil War until July 1, 1874. It opened with 1,000 animals and an admission price of 25 cents. For a brief time, the zoo also housed animals brought over from safari on behalf of the Smithsonian Institution, which had not yet built the National Zoo.

The Philadelphia Zoo is one of the premier zoos in the world for breeding animals that have been found difficult to breed in captivity. The zoo also works with many groups around the world to protect the natural habitats of the animals in their care.

The zoo is 42 acres (17 ha) and is home to more than 1,300 animals, many of which are rare and endangered. The zoo features a children's zoo, a paddleboat lake, a rainforest themed carousel, and many interactive and educational exhibits. 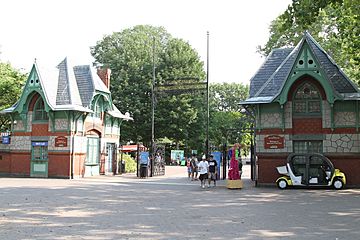 The zoo was once served by the Zoological Garden station on 34th Street and Girard Avenue until 1902. 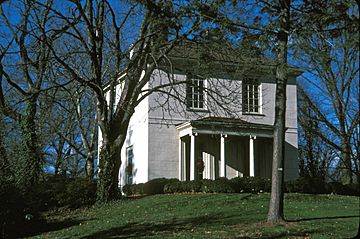 When the Philadelphia Zoological Garden first opened its Victorian gates on July 1, 1874 to over 3,000 visitors, it was the only institution of its kind in the New World. It began as a full-fledged zoo with varied exhibits: 200 mammals, 67 birds and 15 reptiles. 10-11 acres were enclosed with a cedar picket fence as exhibition space for buffalo, deer, wolves, foxes, bears, monkeys, birds, reptiles, etc. There were goat cart rides. Reptiles and small mammals were housed in The Solitude. There was a Carriage House at the entrance for horses that had transported visitors to the Zoo. Landscaping and architecture created a Victorian garden atmosphere that still is represented on the grounds today. The managers stressed the need for the very best facilities, affording optimum husbandry and in-depth scientific observations, including necropsies.

The 1876 Centennial Exhibition was held in Fairmount Park, a few blocks from the 33-acre Zoo. The U. S. President, Ulysses S. Grant, had officiated at the Exhibition and visited the Zoo on April 23. Zoo attendance that year increased as a result of the Centennial Exhibition: the nearly 680,000 attendance, a 36% increase over the preceding year, set a record that would remain unmatched until 1951, with an attendance of 857,901 visitors.

The Penrose Research Laboratory was established in 1901. The first of its kind in any zoo, contributions of the Penrose Research Lab, have included gains in freedom from disease, increased vigor, longevity and understanding of species across the animal kingdom. In 1901 the lab began performing necropsies on every Zoo animal that became ill and died. The lab's history of preventative medicine reflected the foresight of Dr. Charles B. Penrose and Dr. Cortland Y. White, professors at the Medical School of the University of Pennsylvania.

The Zoo played an important role in the 1979 film, Rocky II the second installment of the Rocky film franchise. Several romantic scenes were filmed at the Zoo including Rocky Balboa's proposal to Adrian in front of the Carnivore House.

The brown tree snake was introduced to the island of Guam in the 1940s, and as a result, bird species endemic to the island were driven to extinction in the wild by the invasive serpent. In 1983, the Guam Bird Rescue Project was spearheaded by the Philadelphia Zoo in an attempt to save the Micronesian kingfisher and the Guam rail, two native species still present in large enough numbers to benefit from intervention. The rescue plan called for the capture of all kingfishers and rails on Guam and a captive management protocol was formulated. The captive breeding was carried out in U.S. zoos in an effort to save this species from extinction until reintroduction became feasible. In 1985 the first recorded parent-reared Micronesian kingfisher was bred at Philadelphia Zoo.

In the early morning of December 24, 1995, a fire in the World of Primates building killed 23 animals, including a family group of six lowland gorillas, a family group of three orangutans, four white-handed gibbons, and ten lemurs (two ruffed lemurs, six ring-tailed lemurs, and two mongoose lemurs). All were members of endangered species. The animals died in their sleep from smoke inhalation (carbon monoxide poisoning); none were burned. Ten primates housed in an adjoining building, the Discovery House, survived. At the time of the fire, detection equipment existed in only 20% of the zoo buildings; the primates building, which had been constructed in 1985, was not one of them. In the ten months following the fire, the zoo installed fire detection equipment in all animal buildings. 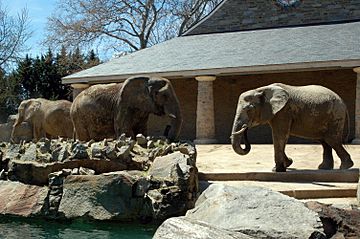 The elephants at the Philadelphia Zoo have been phased out. In July 2009, the last two elephants, both African, departed to a sanctuary.

In 2006, the zoo opened a new, $20-million big cat exhibit, First Niagara Big Cat Falls. Showcasing the animals in scenes reminiscent of their natural habitats, this exhibit allows visitors to get very close to the cats, sometimes separated only by a pane of glass. Visitors can see 12 endangered big cats from around the world, including three new snow leopard cubs, three new cougar kittens, and a new black jaguar cub.

On May 25, 2007, three Amur tiger cubs were born at the Philadelphia Zoo to mother Kira and father Dmitri (also spelled "Dimitri"). 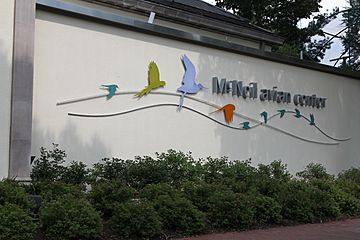 On May 30, 2009, the zoo opened the McNeil Avian Center, a renovation of its classic bird house. It features two birds that are extinct in the wild: the Guam rail and the Guam kingfisher. A theatre presents a fourteen-minute, 4D-movie about avian migration, following the migration of an animated oriole named Otis.

On October 2, 2009, the zoo welcomed a baby Sumatran orangutan, subsequently named "Batu". Batu, a female, is the first-born child to 15-year-old father Sugi and 18-year-old mother Tua. She is also the first baby orangutan to be born in the PECO Primate Reserve, which opened in 1999. The zoo, however, does have a history of successfully breeding orangutans, being the first zoo in the nation to have a successful birth in 1928.

On April 10, 2010, the zoo's seasonal "Creatures of Habitat" opened, a unique exhibit featuring 9 animal stations throughout the zoo, each featuring an endangered animal, and each consisting of statue(s) made completely out of Lego bricks. Each statue was created by Sean Kenney, the first of only nine Lego-certified artists in the world.

On July 17, 2010, the zoo welcomed a new female baby giraffe to first-time parents Stella, 7, and Gus, 4, after a gestation period of over 15 months. This is the first giraffe birth at the Philadelphia Zoo in over a decade.

Philadelphia Zoo opened Treetop Trail in 2011, the first component of its Zoo360 animal exploration trail system, a campus-wide network of see-through mesh trails that allows animals to leave their traditional enclosures and explore more of the campus. Since then, the Great Ape Trail, Big Cat Crossing, and Gorilla Treeway have been added to the system, with additional trails planned for the future.

On April 13, 2013, the zoo opened KidZooU on the site of the old Pachyderm House. Also known as the Hamilton Family Children's Zoo and Faris Family Education Center, it is one of the largest projects undertaken by the zoo and replaces the old Children's Zoo open for over 50 years prior. It is notable for many ecologically conscious features, such as rain gardens and cisterns, geothermal wells, and green roofs, making it the first LEED-certified exhibit at the zoo.

On December 29, 2016, Zenda, the oldest African lion in U.S. zoo population, was euthanized, following a sudden loss of appetite and failing health. Zenda was born at the Johannesburg Zoo in South Africa, and came to Philadelphia in 1993. She and her family were part of the Zoo360 trail. Zenda was 25.

Features of the zoo 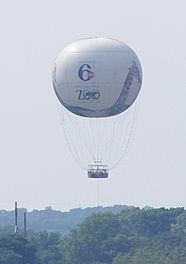 The Zooballoon above the Philadelphia Zoo with the pre-2008 balloon. 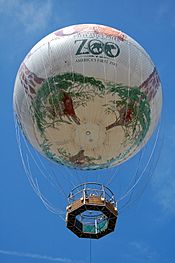 The WPVI Zoo Balloon, from ground level. In late 2008, the zoo changed the color and design of the balloon. Since Winter 2014, the Zoobaloon is taken down for the winter season.

All content from Kiddle encyclopedia articles (including the article images and facts) can be freely used under Attribution-ShareAlike license, unless stated otherwise. Cite this article:
Philadelphia Zoo Facts for Kids. Kiddle Encyclopedia.