Catterick is a village, civil parish and electoral ward in the Richmondshire district of North Yorkshire, England. Historically part of the North Riding of Yorkshire, it is 8.5 miles (13.7 km) north-west of the county town of Northallerton just to the west of the River Swale. It lends its name to nearby Catterick Garrison and the nearby hamlet of Catterick Bridge, the home of Catterick Racecourse where the village Sunday market is held. It lies on the route of the old Roman road of Dere Street and is the site of the Roman fortification of Cataractonium.

The etymology of the name is derived from the Latin place name "Cataractonium", which looks like a Latin/Greek mixture meaning "place of a waterfall", but it might have been a Roman misunderstanding of the Celtic name Catu-rātis meaning "battle ramparts", as partly supported by the spelling Κατουρακτονιον on the Ptolemy world map.

The place is mentioned in Ptolemy's Geographia of c. 150 as a landmark to locate the 24th clime. It dates back to Roman times, when Cataractonium was a Roman fort protecting the crossing of Dere Street over the River Swale.

Catterick is thought to be the site of the Battle of Catraeth (c. 598) mentioned in the Welsh language poem Y Gododdin. This was fought between Celtic British or Brythonic kingdoms and the Anglo-Saxon kingdom of Bernicia. Paulinus of York performed baptisms nearby in the River Swale.

Catterick is mentioned in the Domesday Book as Catrice. The manor was held by Earl Edwin at the time of the Norman invasion, and was afterwards was granted to Count Alan of Brittany. Thereafter the demesne manor was held by the lords of Richmond. The manor has been held by John of Gaunt in the 14th century and the Earls of Salisbury in the 15th century. The manor was held for a while by Sir John Conyers from 1484. During the reign of Queen Mary I, the manor was granted to the youngest daughter of Henry Pole, 1st Baron Montagu, whose son Francis Barrington inherited the honour. The Barrington family passed the manor to Richard Braithwaite whose descendants inherited the manor and held it until the 18th century. Other lords of the manor included the Lawson family, who held it into the late 19th century.

Pallet Hill, just to the north of the village church, is the site of the earthwork remains of a motte and bailey castle. It is thought to have been built by King Stephen in the mid 12th century to control the Great North Road. It has been designated a Scheduled Ancient Monument. To the south of the village on the south side of the former A1/A6136 interchange, is the site of a small Roman roadside settlement and cemetery on Bainesse farm. It has been designated a Scheduled Ancient Monument.

In later times, Catterick prospered as a coaching town where travellers up the Great North Road would stop overnight and refresh themselves and their horses; today's Angel Inn was once a coaching inn. A mile to the south-east are the surviving earthworks of Killerby Castle, a medieval motte-and-bailey castle.

In 1914 Catterick Camp (later Catterick Garrison) was established 4.7 miles (7.6 km) west of the village, in the ancient parish of Catterick but in the civil parishes of Hipswell and Scotton. It is recorded that during the First World War, men came to Catterick to complete their basic training before being deployed to their respective front or Base Depot. RAF Catterick, the airfield to the south of the village also opened in 1914, was transferred to the Army and is now Marne Barracks, named after the site of two significant battles of the First World War.

In 1974 Catterick was transferred to the new county of North Yorkshire. 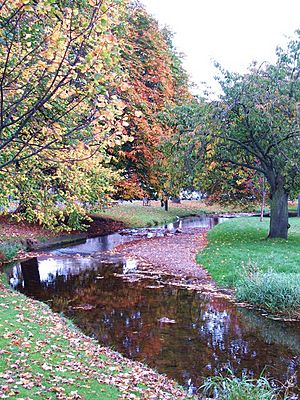 The village lies along A6136 road to Richmond and is by-passed by the A1. The A1 bypass, which cost £1 million at the time, was opened in 1959 by Lord Chesham, the Joint Parliamentary Secretary to the Ministry of Transport. The River Swale turns southward just to the north of the village at Catterick Bridge and flows to the east side of the Catterick. Brough Beck runs east through the village to join the River Swale. There are several bodies of water that are the result of quarrying. Within 2.5 miles (4.0 km) of Catterick are the villages of Brompton-on-Swale, Catterick Bridge, Colburn, Tunstall, East Appleton, Ellerton-on-Swale, Whitwell, Scorton and Uckerby.

The adjacent A1 road and the village have suffered with flooding from Brough Beck. This was most notable in 2012, when a flash flood caused the A1 to be closed for 24-hours in both directions in September 2012. 149 properties in Catterick were flooded and the knock-on effect was believed to have cost the regions' economy over £2 million. In conjunction with the new build and upgrading of the A1 to motorway standard, a £6 million flood reservoir was built on the west side of the A1(M) and downstream of Brough Park. The scheme was officially opened in May 2018, but had its first major test in March 2018 when meltwater from snow in the dales flooded the lower valley. The reservoir can hold over 91,000,000 imperial gallons (410,000,000 l; 109,000,000 US gal) of water and it is hoped that wildlife will colonise the reservoir.

All content from Kiddle encyclopedia articles (including the article images and facts) can be freely used under Attribution-ShareAlike license, unless stated otherwise. Cite this article:
Catterick Facts for Kids. Kiddle Encyclopedia.