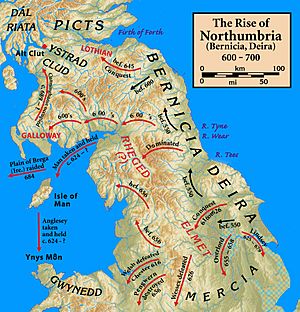 The Anglo-Saxon kingdom of Bernicia

Bernicia (Old English: Bernice) was a kingdom in Northern England. It was an Anglo-Saxon kingdom established by Anglian settlers in the 6th century. Bernicia occupied about the same area as the modern English counties of Northumberland and Durham, and the former Scottish counties of Berwickshire and East Lothian. Bernicia was one of two Anglo-Saxon kingdoms located north of the River Humber. The other was Deira and in the early 7th century they combined to become the kingdom of Northumbria.

The name Bernicia was an Anglicization of the earlier Celtic name Bryneich (or Beornice). The name probably meant 'The Land of Hills' or something very similar. It was the territory of the Guairi, a clan of the Votadini tribe. Their fortress home was the pre-Roman Din Guairi (fort of the Guairi). A large part of the Votadini under the leadership of Cunedda removed to north Wales creating the dynasty of Gwynedd. The remaining Votadini were not strong enough to withstand attacks by the Picts. After 410 they called in Germanic mercenaries

The details of the arrival of the Germanic Angles in this area is not to be found in historical sources, According to Bede the founder of the Bernician dynasty was Ida of Bernicia. But he had little detail on the Bernician kings before the reign of Athelfrith of Bernicia († 616). Bede dated Ida's reign to starting in 547. He also gives the impression that the next four kings had all they could do to hold onto their territory. They had constant battles with the British during this time. Athelfrith was the first to expand the territory at the expense of the British. In 605 Athelfrith united the two kingdoms, Bernicia and Deira, into a single and powerful kingdom called Northumbria.

All content from Kiddle encyclopedia articles (including the article images and facts) can be freely used under Attribution-ShareAlike license, unless stated otherwise. Cite this article:
Bernicia Facts for Kids. Kiddle Encyclopedia.