Colburn is a town, suburban area, civil parish and electoral ward in Richmondshire district of North Yorkshire, England, approximately 2 miles west of Catterick and has a population of 3,606, rising to 4,860 at the 2011 Census. 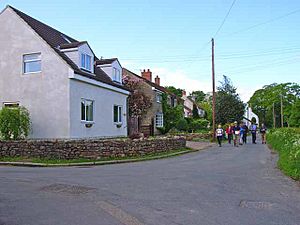 The Coast to Coast Walk passes through old Colburn

The village takes its name from the first settlers along the stream Colburn Beck. It means "cold stream," a "burn" referring to the valley eroded by the flowing water. The Colburn (Coburn) family is widespread around the world, including Edward Colburn, great grandfather of Reuben Colburn, who came to America in 1635 on the ship "Defence" part of the Puritan Great Migration of the 1630s led by John Winthrop. The name Colburn is used to describe both the small, ancient village to the north and (more frequently) the large, suburban housing estate to the south, known also as Colburn Lane Estate.

Surrounding areas of Colburn include Walkerville, the Broadway Shops and Richmondshire Walk.

A Sports and Recreation centre opened in 2004 gives the people of Colburn a place to relax, exercise, and play a number of sports, including football.

Of late Colburn has been at the centre of fierce local controversy over plans by Richmondshire District Council to build new offices for itself on a business park developed by the council but which has stood empty for a number of years. The new offices are budgeted to cost 4 times the value of the existing council offices so the council are to build flats in town centre car parks in nearby historic Richmond to fund the move.

In 2007, Colburn celebrated its 50 years by holding a number of events, from pantomime to quiz nights.

Colburn lies within the parish of Hipswell and is served by St Cuthbert's church, Colburn Lane, Colburn.

All content from Kiddle encyclopedia articles (including the article images and facts) can be freely used under Attribution-ShareAlike license, unless stated otherwise. Cite this article:
Colburn, North Yorkshire Facts for Kids. Kiddle Encyclopedia.