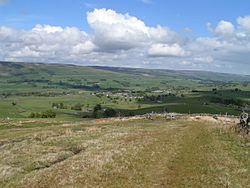 Wensleydale is the valley (dale) of the River Ure on the east side of the Pennines in North Yorkshire, England. Wensleydale is in the Yorkshire Dales National Park. It is named after the small village of Wensley. The village name 'Wensley' comes from the words Woden's ley, or meadow of the pagan god Woden. It is famous for its cheese.

Wensleydale cheese is made from cow's milk. It is produced in a village in the county of North Yorkshire in England. It is usually shaped into a flat disc known as a truckle. The history of the cheese began in Wensleydale in 1150 when monks started making cheese. This became a farmhouse industry until the first commercial cheese was made in Hawes in 1897. Cheese making continued until May 1992 when the cheese factory closed. Six months later a group of local businessmen, ex-factory workers and cheesemakers, were able to reopen the business and promote Real Yorkshire Wensleydale Cheese. This business has become very successful making specialty cheese and now employs more than 200 people.

In the 1990s, sales of the cheese had fallen very low. However, in the popular Wallace and Gromit animated cartoons, A Grand Day Out and A Close Shave the main character Wallace, a cheese lover, mention Wensleydale as a particularly favourite cheese, which boosted sales of the cheese.

All content from Kiddle encyclopedia articles (including the article images and facts) can be freely used under Attribution-ShareAlike license, unless stated otherwise. Cite this article:
Wensleydale Facts for Kids. Kiddle Encyclopedia.