Barnsley (/ˈbɑːrnzli/, locally IPA: ['baːnzlɛ]) is a large town in South Yorkshire, England, located halfway between Leeds and Sheffield. Historically in the West Riding of Yorkshire, the town centre lies on the west bank of the Dearne Valley. Barnsley is surrounded by several smaller settlements which together form the Metropolitan Borough of Barnsley, of which Barnsley is the largest and its administrative centre. At the 2011 Census, Barnsley had a population of 91,297.

Barnsley is a former industrial town centred on coal mining and glassmaking. Although both industries declined in the 20th century, Barnsley's culture is rooted in its industrial heritage and it has a tradition of brass bands, originally created as social clubs by its mining communities. It is also home of the Barnsley chop.

The town is accessed from junctions 36, 37 and 38 of the M1 motorway and has a railway station on the Hallam and Penistone Lines. Barnsley F.C. is the local football club. 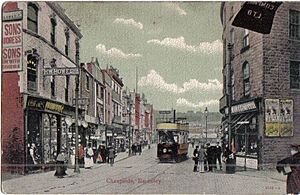 The first reference to Barnsley occurs in 1086 in the Domesday Book, in which it is called Berneslai and has a population of around 200.

The town was in the parish of Silkstone and developed little until in the 1150s when it was given to the Pontefract Priory. The monks built a town where three roads met: the Sheffield to Wakefield, Rotherham to Huddersfield and Cheshire to Doncaster routes. The Domesday village became known as Old Barnsley, and a town grew up on the new site.

The monks erected a chapel of ease dedicated to Saint Mary, which survived until 1820 three annual fairs were held. The town was the centre of the Staincross wapentake, but in the mid-16th century had only 600 inhabitants.

From the 17th century, Barnsley developed into a stop-off point on the route between Leeds, Wakefield, Sheffield and London. The traffic generated as a result of its location fuelled trade, with hostelries and related services prospering. A principal centre for linen weaving during the 18th and 19th century, Barnsley grew into an important manufacturing town.

Barnsley became a municipal borough in 1869, and a county borough in 1913. The town's boundaries were extended to absorb Ardsley and Monk Bretton in 1921 and Carlton in 1938. 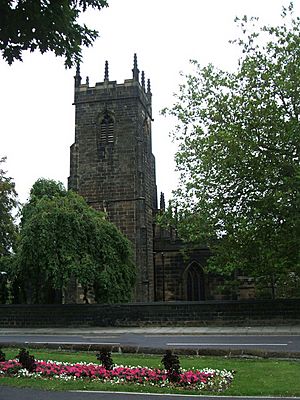 Barnsley was the site of a stampede that resulted in the deaths of 16 children in 1908, at a public hall now known as The Civic, when children were rushing to watch a film in the building.

Barnsley has a long tradition of glass-making, but is most famous for its coal mines. In 1960, there were 70 collieries within a 15-mile radius of Barnsley town centre, but the last of these closed in 1994.

George Orwell mentioned the town in The Road to Wigan Pier. He spent a number of days in the town living in the houses of the working class miners while researching for the book. He wrote very critically of the council's expenditure on the construction of Barnsley Town Hall and claimed that the money should have been spent on improving the housing and living conditions of the local miners.

The first bottle bank for glass recycling collection in the United Kingdom was introduced by both Stanley Race CBE, then president of the Glass Manufacturers' Federation and Ron England in Barnsley. According to a BBC Radio 4 edition of PM aired on 6 June 2007, and a web article, the bank opened in June 1977 but a BBC web article published in 2002 states that the bottle bank opened on 24 August 1977. 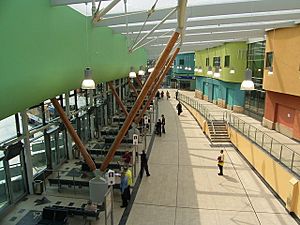 The interior of the redeveloped Barnsley Interchange

The main transport hub is Barnsley Interchange, a combined rail and bus station that was opened on Sunday 20 May 2007, and was the first project in the remaking Barnsley scheme to be completed. Stagecoach Yorkshire run most bus services within Barnsley, operating to and from Barnsley Interchange. Stagecoach acquired the company from Yorkshire Traction in 2005, and has come under fire for operating the service poorly. Stagecoach has cut services substantially, especially in the evenings and weekends. Services towards Huddersfield and Holmfirth have been withdrawn leaving many villages west of Barnsley without their traditional transport links to the town.

Train services are provided by Northern. Northbound there is a half-hourly express service to Leeds which takes around 35 minutes augmented by a slower service via Castleford which takes around 50 minutes. There is an hourly service to Huddersfield via the Penistone Line. Southbound there are four trains per hour to Meadowhall Interchange and Sheffield, two of which are local stopping services and two of which are express. One service per hour continues to Chesterfield and Nottingham. Evenings and Sundays there is a less frequent service.

Barnsley is also served by: 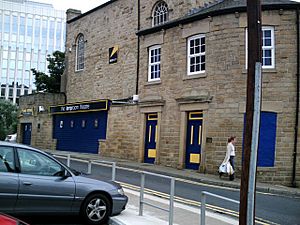 English author Chris Roberts quips that the "small town" of Barnsley is "a couple hundred miles north of London geographically, but several time zones away culturally".

Barnsley is home to a tradition of brass bands, which were originally created as social clubs for the mining communities. Grimethorpe Colliery Band, located in Grimethorpe, 5 miles (8 km) to the east of Barnsley, is perhaps the best known brass band in Britain. It rose to fame in the film Brassed Off and is now the 'artist in residence' at the Royal College of Music, London. The band has performed in Hyde Park during the Last Night of the Proms. Other event include things such as Picnic In The Park, being held on 28 June 2014 to celebrate 20 years of Barnsley Hospice

The 'Bard of Barnsley' Ian McMillan writes a column in the Barnsley Chronicle. He was nominated for a chair of poetry at Oxford University, and appears on BBC Radio 4. The Barnsley accent is starting to wear off amongst the younger generation, but it has generally been better maintained than most other Yorkshire accents. Barnsley has long been known as Tarn by locals however this seems to be heard less as the Barnsley accent seems to be spoken less amongst the younger age group.

Ken Loach's 1969 film Kes was set and filmed in several villages in Barnsley, including Lundwood and Monk Bretton, using local actors such as Freddie Fletcher. His 1977 film The Price of Coal was set at a fictional Milton colliery in the Barnsley area, although the site of filming was Thorpe Hesley, near Rotherham.

There is a live rock and hip hop music scene, which reached its height in the Britpop years, around 1997, due to its close proximity to Sheffield and Manchester. The 1980s saw the rise of Saxon (metal band), Danse Society (Goth) and Party Day (Indie-rock). Two of the Arctic Monkeys studied music at Barnsley College and Barnsley has its own rappers 'Yes Sir'. Barnsley is the home of several live music venues such as the Underground, Shambles St and hosts BOMfest, an outdoor summer music festival which caters for local and national artists which made the Daily Telegraph top 100 U.K. Summer festivals in 2009.

HIVE Gallery is a contemporary art gallery founded in 2007 by Creative Barnsley and Patrick Murphy. It is situated in Elsecar Heritage Centre and curates eight contemporary art exhibitions per year. The HIVE programme ranges from supporting emerging contemporary artists to exhibiting the work of nationally and internationally known artists. Previous shows have included famous artists such as Sir Peter Blake and Patrick Caulfield.

The Lamproom Theatre has four theatrical companies, and showcases theatre in the town.

The Civic, in Barnsley town centre, is a multi-purpose performance venue in a grade II listed building, The Civic was re-opened in March 2009 after a major redevelopment. The Civic has hosted high-profile acts such as Al Murray and Russell Howard. The Civic houses a contemporary art gallery that hosts touring exhibition from the V&A and the Flow Gallery in London. The Civic also curates its own work for touring, such as Little Black Dress and most recently Brazil +55.

Barnsley is twinned with:

All content from Kiddle encyclopedia articles (including the article images and facts) can be freely used under Attribution-ShareAlike license, unless stated otherwise. Cite this article:
Barnsley Facts for Kids. Kiddle Encyclopedia.