Cannon Hall Farm is a working farm and tourist attraction close to the village of Cawthorne, near Barnsley in the English county of South Yorkshire. Open to visitors since 1989, it is owned and run by the Nicholson family. The farm was voted Best Tourist Experience at the Welcome to Yorkshire White Rose Awards 2011. 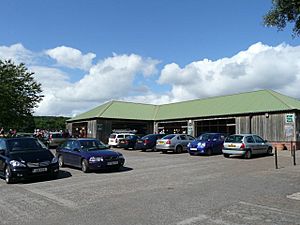 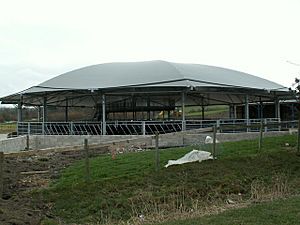 Cannon Hall Farm was once the home farm for Cannon Hall, built by the Spencer-Stanhope family and now a museum. Roger Nicholson, who developed the current farm and attractions inherited the land when he was 16. The farm itself raises sheep, goats, and pigs, with over 750 lambs reared, and 400 ewes and 800 piglets produced annually. The site's visitor attractions include an adventure playground, large tube maze, farm shop, delicatessen, gift and toy shop, and restaurant.

In 2018, Cannon Hall Farm was featured on television programme, called Springtime on the Farm, which was broadcast on Channel five, from 9 April 2018 to 13 April 2018, and which was recommissioned as the weekly show This Week on the Farm in 2020.

In June 2020, it was announce that Cannon Hall Farm received Commonwealth Points of Light Award, the award is awarded by Her Majesty The Queen, the British Prime Minister Boris Johnson, British Government and the Commonwealth nations, for their daily live broadcast on social media during Coronavirus lockdown.

The oldest reference of the farm was made in a conveyance dated 1650 when William Hewet sold the Manor and Farm to Robert Hartley. It was then sold to John Spencer and the Spencer family owned the Cannon Hall until 1775. For centuries, it served as the home farm to the Cannon Hall Estate and was known for its fine strain of pedigree Large White pigs. The estate was broken up and sold to Charles Nicholson in 1957 and is currently owned by his son, Roger Nicholson.

All content from Kiddle encyclopedia articles (including the article images and facts) can be freely used under Attribution-ShareAlike license, unless stated otherwise. Cite this article:
Cannon Hall Farm Facts for Kids. Kiddle Encyclopedia.