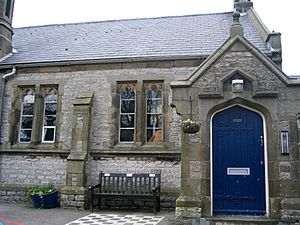 Castleton is a small village in the Derbyshire Peak District national park, in England. It is built on a limestone part of the national park and nearly all the buildings are built of limestone. It has extremely good access as it is near some main cities.

The main attractions in Castleton include Mam Tor, a tall mountain made out of shale. Burbage Moor is a lovely walking spot. It has some climbing spots and has a valley in a valley. Winnats Pass is a path way in between two cliffs. It is very spectacular walking through it. There are big limestone caves near Castleton. They have stalagmites stalactites.

Blue John is a type of rock which is found near Castleton. Water can be seen flowing out of the ground. This is water which has soaked into the limestone.

Castleton has the nickname "Gem of the Pee*”

All content from Kiddle encyclopedia articles (including the article images and facts) can be freely used under Attribution-ShareAlike license, unless stated otherwise. Cite this article:
Castleton, Derbyshire Facts for Kids. Kiddle Encyclopedia.