Kids Encyclopedia Facts
Not to be confused with Blue John Canyon.

The Blue John Cavern is one of the four show caves in Castleton, Derbyshire, England. 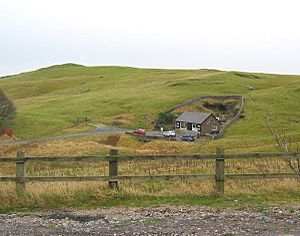 Entrance to the Blue John cavern

The cavern takes its name from the semi-precious mineral Blue John, which is still mined in small amounts outside the tourist season and made locally into jewellery. The deposit itself is about 250 million years old.

In 1865, Blue John Cavern was the site of the first use of magnesium to light a photograph underground. It was taken by Manchester photographer Alfred Brothers.

In the UK Blue John, or "Derbyshire Spar", is found only in Blue John Cavern and the nearby Treak Cliff Cavern. It is a type of banded fluorite. The most common explanation for the name is that it derives from the French bleu-jaune, meaning 'blue-yellow', but other derivations have been suggested.

All content from Kiddle encyclopedia articles (including the article images and facts) can be freely used under Attribution-ShareAlike license, unless stated otherwise. Cite this article:
Blue John Cavern Facts for Kids. Kiddle Encyclopedia.