Kids Encyclopedia Facts
This page is about the town in Derbyshire, England. For other uses, see Bakewell (disambiguation).

Bakewell is a market town and civil parish in the Derbyshire Dales district of Derbyshire, England, known also for its local Bakewell pudding. It lies on the River Wye, about 13 miles (21 km) south-west of Sheffield. In the 2011 census, the population of the civil parish appeared as 3,949. It was estimated at 3,695 in 2019. The town is close to the tourist attractions of Chatsworth House and Haddon Hall.

Although there is evidence of earlier settlements in the area, Bakewell itself was probably founded in Anglo Saxon times, when Bakewell was in the Anglian kingdom of Mercia. The name Bakewell means a spring or stream of a man named Badeca (or Beadeca) and derives from this personal name plus the Old English wella. Bakewell Parish Church, a Grade I listed building, was founded in 920 and has a 9th-century cross in the churchyard. The present church was constructed in the 12th and 13th centuries but was virtually rebuilt in the 1840s by William Flockton. By Norman times Bakewell had gained some importance: the town and its church (having two priests) being mentioned in the Domesday Book and a motte and bailey castle was constructed in the 12th century.

A market was established in 1254, and Bakewell developed as a trading centre. The Grade I listed five-arched bridge over the River Wye at Bakewell was constructed in the 13th century, and is one of the few surviving remnants of this earlier period. A chalybeate spring was discovered, and a bath house built in 1697. This led to an 18th-century bid to develop Bakewell as a spa town, in the manner of Buxton. The construction of the Lumford Mill by Richard Arkwright in 1777 was followed by the rebuilding of much of the town in the 19th century.

Bakewell is in the valley of the River Wye in central Derbyshire. The town centre is sited near the river at about 125 metres (410 ft) above sea-level, with the highest parts of the town at about 185 metres (607 ft) on the valley sides. The town is in the Derbyshire Dales district and is about 13 miles (21 km) southwest of Sheffield, 31 miles (50 km) southeast of Manchester, and 21 miles (34 km) north of Derby. Nearby towns include Matlock to the south east, Chesterfield to the east and Buxton to the west northwest. Villages near Bakewell include Ashford-in-the-Water, Elton, Great Longstone, Monyash, Over Haddon, Sheldon, Rowsley, Pilsley, Youlgreave and Baslow. 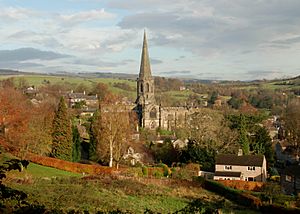 All Saints Church is a Grade I listed church founded in 920, during Saxon times and the churchyard has two 9th-century Saxon crosses. During restoration work, in the 1840s, many carved fragments of Saxon stonework were found in and around the porch, as well as some ancient stone coffins.

One cross is the Beeley Cross, dug up in a field at a disputed location near Beeley and moved for some years to the grounds of Holt House near Darley Bridge. Although only the base and lower part of the shaft survive, it stands over five feet high and is carved on all four faces.

The other cross is the Bakewell Cross, eight feet high and almost complete. It was carved in the 7th or 8th century and shows a number of scenes including one of the Annunciation. This cross may originally have stood at Hassop Cross Roads, although there is no firm evidence for this.

The church contains a selection of cross fragments and carved stones collected by Thomas Bateman and donated to Weston Park Museum in Sheffield before being moved to Bakewell in 1899.

There is a notable alabaster memorial to Sir Godfrey de Foljambe, who acquired the manor of Bakewell about 1350, and his wife Avena. 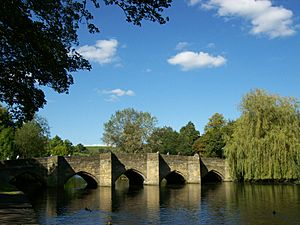 The Manchester, Buxton, Matlock and Midlands Junction Railway opened Bakewell railway station in 1862, then became part of the Midland Railway and later of the LMS main line from London to Manchester. John Ruskin objected to what he saw as desecration of the Derbyshire countryside, and to the fact that "a Buxton fool may be able to find himself in Bakewell in twelve minutes and vice versa." In return for the Duke of Rutland's permission for the line to pass through his estate at Haddon Hall, Bakewell station buildings on the hillside overlooking the town are more imposing than expected and the Duke's coat of arms is carved in the stonework. Such pandering to landowners was common at the time, as their support was needed to pass the Act of Parliament allowing the line to be built. However, the inconvenient altitude of the line forced Bakewell station to be placed out of town, as the Duke insisted it be out of sight of Haddon Hall. These buildings are now used by small businesses, as the line between Matlock and Buxton was closed in 1968. Most of it has been designated the Monsal Trail, a bridle path for walking, cycling and riding.

Commercial trains run from Derby via Ambergate only as far as Matlock, and from Manchester only as far as Buxton. There have been efforts to reopen the remaining Wye Valley portion of the line, which would run through Bakewell and over the famed Monsal Dale viaduct. Peak Rail, a local preserved railway, has reopened the line from Matlock to Rowsley, a village a few miles east of Bakewell, near Haddon Hall. Reaching Bakewell is one of Peak Rail's long-term ambitions. To keep up intentions for a future return of the railway, Derbyshire County Council currently protects the track bed from development. 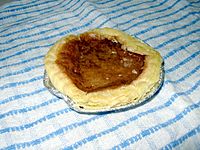 Bakewell pudding is a jam pastry with an egg and ground almond enriched filling. It is not to be confused with Bakewell tart, which is a completely different confection, made with shortcrust pastry, an almond topping and a sponge and jam filling; Mr Kipling also made "Cherry Bakewells", often also known as Bakewell tarts. The origins of the pudding are not clear; however, the generally accepted story is that it was first made by accident in 1820 when the landlady of the White Horse Inn (now called the Rutland Arms Hotel) left instructions for her cook to make a jam tart with an egg and almond paste pastry base. The cook, instead of stirring the eggs and almond paste mixture into the pastry, spread it on top of the jam. When cooked the jam rose through the paste. The result was successful enough for it to become a popular dish at the Inn, and commercial variations, usually with icing sugar on top, have spread the name.

There are a number of annual events that take place in the town. The Peak District traditional "well dressing" takes place during June, in which colourful images made of petals embedded into clay appear at several places throughout the town. The Bakewell Agricultural Show (the Little Royal) is one of the largest covered agricultural show in the UK, and attracts around 65,000 visitors. It takes place on the first Wednesday and Thursday in August at the Bakewell Showground. August also has the Bakewell Arts Festival — a music and theatre event that started in 1997. The Peak Literary Festival is held in the Spring and Autumn of each year. The Spring festival starts on the last Friday in May and the autumn on the last Friday in October. Carnival week, culminating in a procession through the town, is held at the beginning of July.

Bakewell has a recreation park to the east of the centre, with tennis courts, a children's playground, and football and cricket pitches. Near the library there is a municipal swimming pool and gym. The River Wye provides a popular riverside walk.

Bakewell is mentioned by Elizabeth Bennet as the town from which she travelled to visit Pemberley, in ch. 43 of Jane Austen's Pride and Prejudice.

Bakewell attracts domestic and foreign tourists. Monday is popular as the town's traditional market day. The cattle market is held in a purpose-built agricultural centre across the river from the town centre, where a stall market is held.

A major employer is the Peak District National Park Authority, which has its offices at Aldern House, Baslow Road. Its task is conserve, enhance and promote understanding and enjoyment of the local area. Opposite Aldern House is another major employer, Newholme Hospital, an NHS cottage hospital providing outpatient services. Establishment of a Costa Coffee branch in the town caused a protest among some local businesses.

In 1888 William Storrs Fox, a Cambridge graduate and naturalist, founded St Anselm's School, Bakewell. The school is now coeducational, with some 250 day and boarding pupils aged 3–16. Lady Manners School is a coeducational secondary with about 1,450 pupils. It is also home to the Brew School, the UK's biggest dedicated brewing and distilling school, established in 2014 at the historic Rutland Mill.

The town's primary schools include All Saints Church of England School and Bakewell Methodist Junior School. There are other primaries in neighbouring villages.

All content from Kiddle encyclopedia articles (including the article images and facts) can be freely used under Attribution-ShareAlike license, unless stated otherwise. Cite this article:
Bakewell Facts for Kids. Kiddle Encyclopedia.