Pride and Prejudice facts for kids 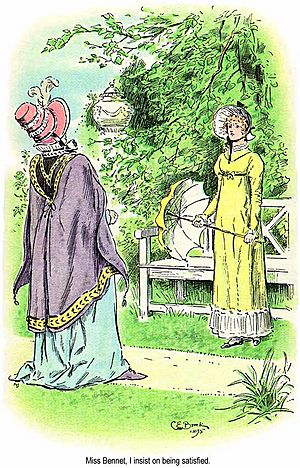 "It is a truth universally acknowledged, that a single man in
possession of a good fortune must be in want of a wife". (first line)

The story starts with Mr. Bingley, a wealthy, handsome young gentleman, who comes to town and rents a place near the Bennet family. He comes with quiet Mr. Darcy and his pretty sisters. Jane Bennet and Mr. Bingley begin to spend a lot of time with each other, even though the sisters of Mr. Bingley try to cut the attraction. Mr. Bingley is loved and admired by almost every woman in the town. Mr. Darcy is disliked by everybody, because of his arrogant way of talking and his mean attitude. Elizabeth Bennet, the second daughter of Mrs. Bennet, seems to despise Mr. Darcy. She despises him even more after he refused to dance with her at the ball.

Elizabeth soon grows to admire an officer named Wickham. He seems to equally hate Mr. Darcy. He tells her a sad story about how Mr. Darcy was mean to him. This story makes Elizabeth hate Mr. Darcy even more. Meanwhile, Mr. Darcy begins to fall in love with Elizabeth.

Bingley slowly begins to declare his proposal of marriage to Jane, when he suddenly has to leave to Netherfield. Netherfield is the house he lives at most of the time. He did not plan to leave for a long time but his sisters use this chance to move Bingley and Jane away from each other. The sisters follow Bingley to London. Bingley's quick leave makes Jane sad and confused. Elizabeth finds out that it is because of his sisters.

Before Mr. Bingley leaves, Mr. Collins, the man who was supposed to inherit all of Longbourn (where the Bennet family lives), appears. The rich and pompous Lady Catherine de Bourgh had employed him as a clergyman. Collins wanted to find a good wife from the daughters of Mr. Bennet. He tries to take Jane as his wife, but after learning about the relationship between her and Mr. Bingley, he tries to marry Elizabeth. He proposes, but Elizabeth rejects him. Her mother is angry because Elizabeth could have lived in Longbourn if she married Mr. Collins. Then Mr. Collins turns his attention to Elizabeth's friend, Charlotte Lucas. He decides to marry Charlotte. They marry and Charlotte invites Elizabeth over to her house for a short visit.

Elizabeth goes to Charlotte's house in the Spring. It is quite close to Rose Park. Rose Park is Lady Catherine de Bourgh's land. Mr. Darcy's aunt is Lady Catherine de Bourgh. He is staying there when Elizabeth visits and they meet. Elizabeth finds out that Mr. Darcy was the one who put an end to Mr. Bingley and Jane's love. She later rejects Mr. Darcy's proposal. She says all the mean thoughts she had about his cruelness towards Wickham and Jane and Mr. Bingley's relationship.

Darcy writes an explanation to Elizabeth in a letter. Mr. Wickham almost eloped with Darcy's 15-year-old sister, Georgianna. Mr. Wickham had only wanted her money. Also, Darcy told Bingley not to propose marriage to Jane because he thought that she did not actually love him. Elizabeth returns home soon after and thinks about Darcy's explanations and all her misunderstandings about him.

A few months later, Elizabeth visits Pemberly during her tour with her aunt and uncle. Pemberly is Darcy's land. Mr. Darcy meets them there. and is very kind to them during their visit. Mr. Darcy's kindness makes Elizabeth even more attracted to him. She also becomes friends with his sister Georgianna. Later, Elizabeths receives a letter from Jane. It contains sad news that their younger sister Lydia, has run off with Wickham. They find out that Wickham does not want to marry Lydia, but this would cause a scandal. Elizabeth and her uncle and aunt hurriedly return home. Elizabeth thinks that now Mr. Darcy will never speak to her again because of her sister's behavior.

Then, Lydia and Wickham are found and are married. They later visit Longbourn. While describing her wedding to Elizabeth, Lydia talks about Mr. Darcy. Elizabeth sends an inquiry to her aunt because she is surprised. She learns that Mr. Darcy had paid for all the wedding expenses and paid Wickham to marry Lydia.

Bingley and Darcy come to Longbourn. Bingley proposes to Jane, and she accepts. Mr. Darcy proposes to Elizabeth, even though Lady Catherine does not like Elizabeth. Elizabeth accepts the proposal. Jane and Elizabeth marry their lovers on the same day.

All content from Kiddle encyclopedia articles (including the article images and facts) can be freely used under Attribution-ShareAlike license, unless stated otherwise. Cite this article:
Pride and Prejudice Facts for Kids. Kiddle Encyclopedia.