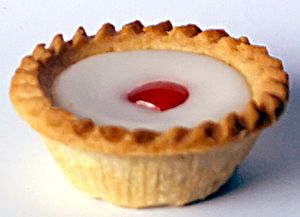 A Bakewell tart is an English confection consisting of a shortcrust pastry shell beneath layers of jam, frangipane, and a topping of flaked almonds. It is a variant of the Bakewell pudding, closely associated with the town of Bakewell in Derbyshire.

A Cherry Bakewell, also known as a Bakewell cake, is a version of the tart where the frangipane is covered with a top layer of almond-flavoured fondant and a single half glacé cherry.

All content from Kiddle encyclopedia articles (including the article images and facts) can be freely used under Attribution-ShareAlike license, unless stated otherwise. Cite this article:
Bakewell tart Facts for Kids. Kiddle Encyclopedia.